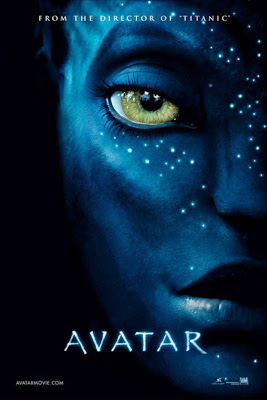 Avatar, the new, multi-million dollar James Cameron’s 3-D sci-fi flick, opened to mixed reviews on Dec. 18, with some criticizing the film’s length (2 hours and 45 minutes with pre-show trailer at the Bob Bullock Museum of Texas IMAX Theater in Austin) and its shallow, predictable plot, while allowing that the special effects are pretty awesome.

Well, reviewers get paid to find fault, don’t they? Pretty decent??? This is the most fun movie in decades, see it, and by all means see it in 3-D!

The plot is shallow and predictable; guess what, the good guys win; sorry if I ruined the suspense! What the reviewers aren’t saying, largely, and what Cameron, director of Titanic, Alien, and other mega-hits, is apparently denying, is that the plot is based pretty firmly on a 1957 Poul Anderson short story, “Call Me Joe.”

Patterson has been quoted as saying that his movie is based on “every science fiction story I ever read as a child”; well, Polly bets a cracker “Call Me Joe” was one of ’em! (To be fair, my viewing companion said Avatar also has the same plot as the Western classic A Man Called Horse; there are similarities, but Pollyanna is unconvinced. Still, if you’re a fan of Star Wars‘ adorable little Ewoks and their forest world of Endora, you’ll feel right at home at Hometree!)

In Anderson’s tale, a paraplegic future space Marine is offered the chance to “drive” a genetically linked “avatar” on a distant planet being mined to benefit Earth’s still-rapacious industry. Avatars are artificially grown beings, physically the same as the planet’s indigenous “humanoids,” intended to survive in an environment inhospitable to earthlings, and to gain the confidence of (and “study”) the natives.

While the operator is at work, his “real” body is in a kind of suspended animation; when the “real” Marine is awake — he must record his experiences for the expedition’s egghead scientists and confer with its military leader, played to gung-ho perfection in Cameron’s film by Stephen Lang — his avatar is unconscious on the planet, Pandora. Inhabiting his avatar, 10 feet tall and perfectly physically developed, is the big attraction for the sidelined Marine, an action-type guy.

Anderson’s story and Cameron’s movie diverge there, with the film offering, for example, a plummy role for Alien star Sigourney Weaver, now a still-stunning 60-something who looks good with and without her avatar suit. But you can probably figure it out anyway, from the ubiquitous trailers being shown on the tube; again, the movie really isn’t rocket science.

Trust me: it’s going to win a lot of prizes and be seen on television for decades to come.

Why see it in the theater, then?

Cheap thrills, first and foremost: for flying through mist and floating rocks on the back of a prehistoric raptor that might also be a butterfly. Until you have a 30 foot high screen and home 3-D? Oh, baby!

For a phosphorescent forest, Chihuly-like ferns, and seed pods like aerial jellyfish that float before your eyes, just out of reach.

For a gigantic, inhabited, multi-trunked tree, the World Trade Center of trees.

For butt-kicking action involving a variety of fast, fanged, furry, finned, flying, and/or fortified creatures. Many things about the Marines remain the same in this Future as in our day: Boo-rah!!

This is, in fact, a Future that seems as hauntingly near as the floating embers you’ll want to brush away, to snuff — there’s reference to a “past war” in Venezuela, and its “mean bush” — and of a valuable mineral, “unobtanium,” whose presence drives the destruction of paradise and its “terrorist” inhabitants. (Read Marion Delgado’s article on coltan in the Rag Blog, about a similar Present Day “terror”!)

See Avatar, too, for the fierce jungle creatures and the almost Disney-esque web of life linking them with Pandora’s people, trees, and ancestral wisdom. Listen to hero Jake Sully’s description of his home planet, where the people killed the earth, their Mother, and nothing green remains. Have we, today, any ancestral wisdom left in us? Listen to the sighs of the people sitting with you in the theater; there’s not one of them who doesn’t recognize that this is a Future near enough, indeed, to feel, as thoroughly as Jake feels his avatar’s powerful legs, and his toes digging into Pandora’s earth. We are the web of life here.

For the film, Cameron had an actual language, Nav’it, developed, as was the case years ago with Star Trek‘s Klingon. Nav’it’s use in Avatar is limited, and subtitles but sparingly required. As Jake learns the ways of Pandora’s people, he finds that there is really only one important thing to say: “I see you.“ 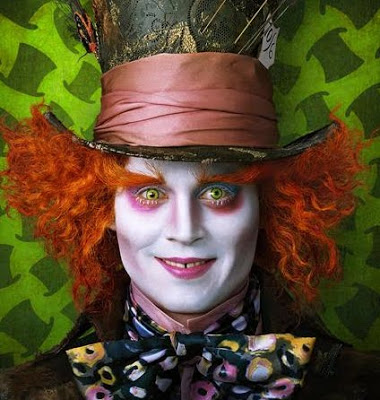 Added extra attraction: Johnny Depp as the Mad Hatter.
An added attraction to this screening of Avatar was the trailer for the upcoming Tim Burton 3-D version of Lewis Carroll’s Alice in Wonderland, with Johnny Depp as the marvelous Mad Hatter. My companion pointed out that with both of these films, we have entered our own Wonderland: the technology now exists to bring the most imaginative author’s vision directly to the screen, no adaptation or compromise necessary. When Alice falls down that rabbit hole, honey, you will grab your seat!

BTW, if you, like Pollyanna, were disappointed in the recent AMC miniseries re-make of Patrick McGoohan’s classic 70s British television series The Prisoner, do check out Sy Fy Channel’s Alice! I had never before realized how similar these stories are, and Sy Fy’s Alice is much more faithful to the original Prisoner‘s ongoing ambiguities than the stiffly conclusive mini-series. (Well, “They” do say there are only a few actual plots; everything else is in the variations!) Even without 3-D, Alice‘s effects are pretty awesome.

For photos and trailers from Avatar, go here.