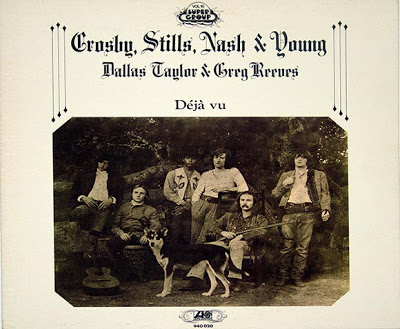 Bob Dylan’s “John Brown” is one of the most moving antiwar songs ever recorded. The track avoids sloganeering, resonating an anti–Vietnam War sentiment with a straightforward, human, and very sad story: A mother proudly sends her son off to war, only to receive home a young man missing his hand and an understanding of what he’d been fighting for. Taking on the voice of the soldier, Dylan sings, “And I could not help but think, through the…stink, that I was just a puppet in a play.” The song works so well because the storytelling is subtle; the political message, dagger-sharp.

Of course Dylan wasn’t the only songwriter to give the early antiwar movement a poignant chorus. Crosby, Stills, Nash, and Young stood on those same frontlines, writing songs like 1970’s “Ohio” that put a protest against the Kent State massacre on commercial radio. This week, as the Neil Young–directed political concert documentary CSNY: Déjà Vu hits theaters, we see this ’70s supergroup attempt again to turn the political into the personal, and the personal into a four-part-harmony pop song. But like the response the band has received to this ambitious outing, the film’s results are mixed.

The documentary works when it uses CSNY’s catalog as an excuse to explore personal war stories or concertgoers’ feelings about the place of performers with strong political beliefs. But when Young’s storytelling gets lost in the reductive sermons of a song like “Let’s Impeach the President”—played often throughout the film—it’s hard to see CSNY: Déjà Vu as having any more impact than a giant bumper sticker.

Which raises the question: Who are the best leaders for a war protest? Soldiers, with their battlefield experience, or famous singers, with their public exposure? It’s a tough question to figure out, and, to Young’s credit, CSNY: Déjà Vu doesn’t make the answers very easy. Instead he attempts to bring a chorus of opinions into one movie, a tactic that both empowers and distracts from his vision.

The movie, which Young directed under the name Bernard Shakey, focuses on the 2006 CSNY Freedom of Speech Tour. The band hit the road during midterm elections to perform their classic hits alongside Young’s new protest songs from his Living With War disc. Along with footage of live concerts and recording sessions, the documentary involves the work of television news producer Mike Cerre, who was “embedded” on the tour as he had been with troops in Iraq. Cerre captured the reactions to CSNY’s anti-Bush message from fans, radio DJs, and war veterans, among others. Among the most interesting responses are those of the red-state audiences. You’d think any CSNY fan willing to see the band live would also embrace its peace anthems, but surprisingly the group’s audience includes a very vocal conservative contingent. At one Atlanta show, fans protested with boos, middle fingers, and quips that “Neil Young can stick it up his ass” when CSNY sang Living With War’s didactic impeachment anthem. The song is grating, yes, but it’s shocking that people would walk out in droves, especially during a tour called “Freedom of Speech.”

While the extreme reactions of music fans, critics, and radio personalities are entertaining, the film picks up momentum when it moves beyond CSNY. The fallen-soldier story that worked in the lyrics to Dylan’s “John Brown” works 10 times more powerfully on a movie screen. Young includes thoughtful interviews with the troops, from a deserter who had been hiding out in Canada to musician and former Marine Josh Hisle, who jams with Young in a hotel room. The movie also plays up the déjà-vu theme often, best exemplified in scenes from the Vets 4 Vets support group’s meetings with men and women who had served in Vietnam and Iraq.

No one could accuse Neil Young of jumping on a protest bandwagon for attention, regardless of the cringe factor of some of his recent lyrics. The peace signs on the 62-year-old’s guitar strap are more than just nostalgic symbols. He runs a massive “Living With War” Web site, designed to look like a cross between CNN and USA Today, which catalogs articles about the soldiers in Iraq and Afghanistan, hosts protest songs and videos sent in by the public, and counts down the number of days until Bush is out of office. It also streams, at top volume, “Let’s Impeach the President” (part of the reason it’s hard to remain on the site for very long).

After watching Young’s documentary and poking around his site, I admire the musician’s stamina in supporting soldiers, and at the same time promoting a genuine antiwar belief system. At this point in his career, Young doesn’t even try to disentangle the personal from the political, but he also doesn’t do it with Bono’s ego.

I’ve seen CSNY: Déjà Vu twice, and in the end it’s the personal stories that are hard to shake. If there’s one thing the Vietnam War protest anthems taught us, it’s that you can ignore news feeds and statistics; real insight into bloodshed and the loss of a loved one is the strongest message of all.