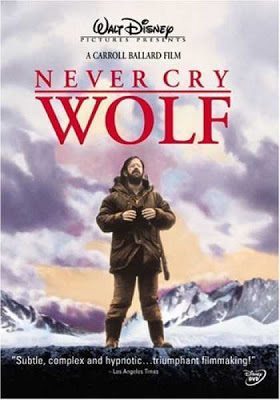 We each have our own habits, and one of mine is tracking down films that had been well received in their time, but which I had missed — for which purpose Netflix is a great resource. I recently got a copy of Never Cry Wolf, made in 1983. (Somewhat ironically, since it is neither animated, nor a “family film,” it was a Walt Disney Production.)

The film is an adaptation of Farley Mowat’s autobiography. Directed by Carroll Ballard, it stars Charles Martin Smith, Brian Dennehy, and Zachary Ittimangnaq. The music, haunting enough to merit special mention, is by Mark Isham, and the cinematography is by Hiro Narita. Narita’s work is magical, his effects achieved without computers, the closeups of wolves — and their interaction with Smith — so remarkable as to be nearly incredible.

The premise of the film is that the Arctic caribou are dying off as a result of being preyed on by wolves. A young government biologist, Tyler (Charles Martin Smith), is sent to the Arctic wilderness of Northern Canada to gather proof than the savage wolves are the reason the caribou herds are dying. Tyler is flown there, to a totally isolated area, and begins his study. He is a survival expert — and indeed, he needs to be, in this situation!

What the young biologist quickly learns is that the wolves are not renegade killers, but smart, courageous, very caring of their families. In the course of the film (just short of two hours) we meet an Inuit family and realize that, like the caribou, they are at risk from contact with “civilization” (represented here by Brian Dennehy).

When the film ended I realized I was weeping. Why, I’m not sure. There was no moment of tragedy. The young biologist survives. (But it is left open as to whether he returns or remains in the wilderness.)

Smith devoted nearly three years to Never Cry Wolf and said he found the process difficult, that “during much of the two-year shooting schedule in Canada’s Yukon and in Nome, Alaska, I was the only actor present. It was the loneliest film I’ve ever worked on.”

Perhaps what affected me was the encounter with the vast, empty, yet vitally alive landscape of the Arctic.

An American composer, John Luther Adams — who had moved toward his own form of contemporary music after discovering the works of Edgar Varese, John Cage, Morton Feldman, and Harry Partch — eventually left a Southern California he found overdeveloped and moved to Alaska, which since 1978 has been his home (his work received a respectful review in the New Yorker). His music (and I’m listening to a CD of his, In the White Silence) reflects his adopted landscape.

As my email friend, Hunter Gray, will understand, better I think than most, what seems empty is full, what seems silent has a sound many have lost the ability to hear.

I found, in the 24 hours after mentioning Never Cry Wolf to a few friends, that they had seen it, and had much the same reaction I had. A strange film. Very real, and like so much that is very real, profoundly mystic.

[David McReynolds worked on the staff of the War Resisters League for 39 years, retired in 1999, and lives with two cats on Manhattan’s Lower East Side. He has been active in the socialist movement, being the Socialist Party’s candidate for President in 1980 and 2000.]