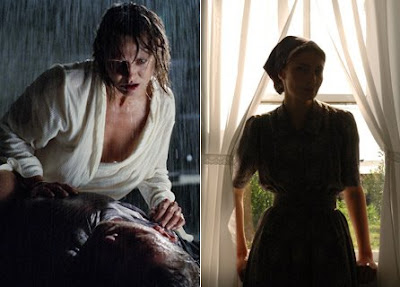 Charlotte Fich and Anders W. Bertelsen in “Just Another Love Story,” left, and Maria Pankratz in “Silent Light.” Photo courtesy of salon.com.
‘The movies that are most daring and strange — and often the most extraordinary — don’t get much of a shot.’
By Andrew O’Hehir / January 8, 2008

After years of covering the indie-film beat, I’m pretty well convinced of the dogma that drives the business: The audience for art-house films is still out there, no smaller or larger than it ever was. But it’s carved up differently, and the demands on its attention are far more various than they were in the days when reverent big-city throngs lined up for the latest Bergman or Fellini flick.

Basically, the movies that are most daring and strange — and often the most extraordinary — don’t get much of a shot. They have to stop off in a few theaters on the way to video-on-demand or DVD, because otherwise people like me don’t pay attention and the public never hears about them at all. But outside the world of movie bloggers and their readership (hi, guys!), even films that might have provoked furious debate 20 or 30 years ago will just come and go, momentary blips on a bewildering radar screen.

Consider the cases of two movies about adultery, the Danish thriller “Just Another Love Story” and the Mexican rural drama “Silent Light,” pictures that were rapturously received on the 2008 festival circuit. Whatever their virtues and flaws, they’re both arresting and accomplished films that evince a visionary sensibility, reject ordinary storytelling forms and seek to take the viewer on an unpredictable journey. I’d recommend both to any serious film buff. Both are getting quickie releases in Manhattan theaters this week, with some wider release (but not much) to follow. If you don’t live in New York or L.A., very likely your next chance to see them will be in your living room. So it goes these days.

As you may have surmised, the title of writer-director Ole Bornedal’s “Just Another Love Story” is meant to be ironic. Bornedal has made a bloody, showoffy, self-mocking noir, the kind of movie that presumes nothing good ever comes of two people falling in love. It’s narrated by Jonas (Anders W. Bertelsen), whom we see in the opening shot lying prostrate in the rain on a Copenhagen street, evidently bleeding to death. A blond woman arrives to moan and shriek over him, but he isn’t impressed. “The woman,” he tells us in tones of resignation. “There’s always a woman.”

Actually, the blond shrieking woman isn’t the woman. Instead she’s his long-suffering wife, Mette (Charlotte Fich), whom he abandoned some months earlier to go live with the sultry and mysterious Julia (Rebecka Hemse), renegade heiress to a publishing fortune. You see, it’s no wonder Jonas finds himself dying in the street, since he’s violated at least three of the cardinal rules of the film-noir universe: Never leave your wife for the Other Woman; never take the suitcase that doesn’t belong to you; and never pretend to be someone you’re not.

Punishment awaits those who break those rules, of course, and Bornedal’s task is to make all those forbidden fruits completely irresistible to Jonas and bring him full circle, from dying in the street to upstanding family man and back to, well, dying in the street. “Just Another Love Story” is a monumentally implausible tale told with a bravura array of flashbacks, flash-forwards, dream sequences and slo-mo incidents, and involving a beautiful woman suffering from both amnesia and blindness, an undead boyfriend, a mysterious fellow wrapped in mummy-style bandages, and a suicide pact in a Hanoi junkie hotel.

When Jonas’ piece-of-crap car stalls out on the highway, with wife and kids aboard, Julia swerves to avoid it and nearly dies in a head-on collision. She’s just arriving from Frankfurt, where she got off a plane from Vietnam, where she was fleeing a poisonous relationship with a boyfriend named Sebastian (Nikolaj Lie Kaas), whom she met in Asia. But her super-rich family have never met this mysterious paramour, and when Jonas shows up at the hospital to check on the comatose Julia, they all assume that he’s Sebastian. Within minutes he’s been assigned to kiss her and murmur in her ear, bathe her naked body with a loofah glove, and accept a blank check tucked into his pocket by Julia’s publishing-magnate papa.

Look, I said it was ridiculous. Of course when Julia wakes up she can’t see anything and doesn’t remember the real Sebastian anyway (who has reportedly been murdered in Hanoi) and, hey, Jonas has gotten kind of bored with life with Mette and the kids anyway. Work all week, shop on Saturday, have some friends over to dinner — why not chuck all that away and shack up with blind, ultra-rich amnesia-babe, anyway? As you have figured out by now, there are many reasons why not, and those all come together in a crashing finale.

You could call “Just Another Love Story” nothing more than an exercise in style, but A) Bornedal’s got style to burn and B) that’s not quite fair. Beneath all the dazzling cinematography, propulsive score and overcommitted acting, I found this movie an affecting, mordant comedy about male midlife crisis in its most extreme form. As Jonas observes to his best friend — who’s eager to get his paws on Mette, if Jonas doesn’t want her — his own behavior makes him sick. Which doesn’t mean he can stop.

Mexican director Carlos Reygadas — a one-time attorney who reinvented himself as an art-cinema auteur — also has a flair for opening shots. His last film, “Battle in Heaven,” began by bringing us up close and personal with a punk-hippie chick administering an enthusiastic blow job to a remarkably ugly man. In “Silent Light” he goes in a somewhat different direction; the film opens with a six-minute shot of the night sky gradually giving way to dawn, accompanied by a chorus of birds and insects (and ends with a similar shot in reverse, as evening moves into night). It’s amazingly beautiful and it tests your patience; both things are par for the course with Reygadas, After that, you’ve either surrendered to his idiosyncratic sense of rhythm, or you’re out of there.

Unlike Bornedal, Reygadas has no interest in mimicking or tweaking conventional film genres. Despite the in-your-face sexuality of his earlier films, they’re ambiguous and nearly plotless dramas featuring nonprofessional actors and long, contemplative takes, whose roots lie in the cinema of Andrei Tarkovsky or Abbas Kiarostami. “Silent Light” both departs and does not depart from Reygadas’ pattern. There’s no explicit sex at all, but the setting and subject are certainly peculiar. This is presumably the first Mexican film ever made that isn’t in Spanish, as well as the first film from any nation made in Plautdietsch, a Germanic language or dialect spoken (at least in recent centuries) only by isolated communities of Mennonites.

I don’t know how in the world Reygadas recruited Mennonites from the Mexican state of Chihuahua — where about 50,000 Plautdietsch-speakers still hang on — to act in his film. I don’t even know how many of them have ever seen a film. (Unlike their Amish brethren in the United States, the Mexican Mennonites do not universally reject modern technology, but I doubt that movies play a large role in their lives.) Regardless, the results are astonishing. “Silent Light” brings us intimately into the private world of this esoteric society without ever feeling like ethnography or gawkery; at the risk of cliché, this prodigiously atmospheric fable of love and faith feels both timeless and modern. Reygadas deliberately evokes biblical parable and Bergman’s “The Virgin Spring,” but also features a wonderful scene where two men work on an old Chevy pickup and sing along to a norteno hit on the radio.

Like “Battle in Heaven,” “Silent Light” is at least nominally about an individual’s internal moral struggle. Johan (Cornelio Wall), the taciturn father and husband in a Mennonite farm family, has conceived a powerful romantic passion for Marianne (Maria Pankratz), who runs a coffee shop in the nearest town. Johan is too upstanding not to tell his wife, Esther (Miriam Toews), everything, including the fact that he has physically transgressed their marriage vows. For her part, Esther seems determined to bear it all in silence. Advised by a friend that his love for Marianne may be sacred in nature, and by his father (played by Wall’s actual father) that it’s “the work of the Enemy,” Johan is trapped by indecision, which leads first to tragedy and then to miraculous sacrifice and transfiguration.

But as usual with Reygadas, the story accounts for maybe one-quarter of the film’s impact and meaning. His spectacular, ultra-long takes focused on the rituals and details of rural life each become their own little movie, animated by the interaction between the dramatic Chihuahua landscape and the faces and figures of these handsome, stoical people. Are Wall and Pankratz and Toews “acting,” in the normal sense? It’s tough to say. There’s a scene when Johan and his children go for a swim, clad in Mennonite long underwear, in their homemade outdoor pool that’s among the most gorgeous things I’ve ever seen in a motion picture. It isn’t fiction but also isn’t exactly documentary, and it has a passion and mystery and immanent vitality that, for my money, outstrips the film’s somewhat forced conclusion.

This entry was posted in RagBlog and tagged Arts, Criticism, Film, Independent Film. Bookmark the permalink.