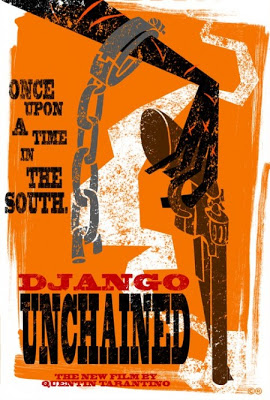 At times, the movie seems like an advertisement for integration on the bounty hunting circuit, and for friendship between a black and a white man who both kill without compunction.

The director, Quentin Tarantino, appears on screen near the end of his new movie, Django Unchained, that has been nominated for several Oscars including best picture, best original screenplay, and best cinematography. In Django Unchained, Tarantino plays the kind of low-life character that he also plays in his classic, Pulp Fiction, which starred Samuel Jackson and John Travolta as a couple of hipster hit men.

Jackson appears in Django Unchained as an old, white-haired servant (yes, an African-American) on a sinister plantation in Mississippi before the American Civil War. He’s as sinister as the white master himself and he dies an agonizing death, as do almost all of the other characters in this retro shoot-‘em-up.

Alas, John Travolta doesn’t make an appearance in this new film, though the two main characters in Django Unchained are hit men as they are in Pulp Fiction. One of them — Dr. King Schultz — is German-born; the other — Django himself — is a black slave, or rather an ex-slave. Schultz liberates him. He’s the Great Liberator.

For a time, the two men team up to kill outlaws who have prices on their heads and then collect the hefty financial rewards. It’s a good living, though they don’t ever spend it or have the opportunity to enjoy it. At times, the movie seems like an advertisement for integration on the bounty hunting circuit, and for friendship between a black and a white man who kill without compunction.

The bounty hunting life wears thin after a season and the two vicious, albeit virtuous, hit men travel into the belly of the beast of slavery to liberate Django’s slave wife who has a beautiful face, and, on her black back, another kind of beauty, if you can call the scars of a brutal beating beautiful.

Quentin Tarantino’s latest movie is his first set in the American South and it’s the first to have a large cast of African-American actors playing the roles of mostly subservient African-American slaves. Still, in many ways Django Unchained is like many of his previous movies, including Pulp Fiction. Django Unchained offers more pulp fiction — this time with an historical setting and historical costumes. The dresses are very lovely.

From nearly the first scene to nearly the last, there’s violence on the screen and almost uninterrupted violence all the way through. In that sense, Django Unchained duplicates Pulp Fiction. There are no chase scenes, but there’s a barrage of bullets, buckets of blood, and plenty of unpatriotic gore.

At the end, there’s a big explosion. Django blows up the plantation mansion with its stately white columns and rides off into the night — not the sunset — with his wife, whom he has liberated and who speaks German as well as English, but doesn’t seem to have any kind of street smarts.

All on their own, the two carpetbagger gunslingers bring a civil war of their own making to what would soon become the Confederate States of America.

Django’s pal, Dr. Schultz, dies fighting the good fight against the nasty slave owners and for the downtrodden slaves, who don’t lift a black finger to free themselves in this comic melodrama. No, sir, there is no black slave revolt in this picture. The back masses don’t seem to know what freedom is or where to find it. Dr. Schultz has to tell them to follow the North Star to freedom after he gives a group of black men the opportunity to escape bondage.

Here, as in the Westerns of old, it’s the lone gunman who makes a difference, and, though Django’s skin is black, he’s not much different, if at all, from lone white gunmen. He wears a cowboy hat and a holster, rides a horse, carries a gun, and, as one of the characters says of him, he’s “the fastest gun in the South.”

Jamie Foxx plays Django as Samuel Jackson might have played him if he were still a young man. Christoph Waltz plays a wry Dr. Schultz and Leonardo DiCaprio inhabits the role of the white plantation owner, Calvin Candie, a sadistic, sexually perverted Southern Calvinist.

Kerry Washington doesn’t speak much. But she does an admirable job as Broomhilda, Django’s long-suffering wife. Beaten, bound, gagged, and sold down the river, she’s freed by her husband who slays the dragon of slavery — on one plantation — and rescues her. She’s the archetypal black maiden; he’s the knight without shining armor but with the virtues of a Christian warrior.

Tarantino offers something for film students, something for lovers of Westerns, and something for his own cult followers. I suppose students and scholars of American history will find scenes to analyze and interpret. The best parts of the movie are pure comedy, as in the very last scene in which one of the characters looks at Django as he rides off, and asks, “Who is that black man?” Those who watched the Lone Ranger on TV will get the reference. Those who love old Westerns will also notice allusions to High Noon.

I found the whole film largely predictable. I knew that Django would rescue his wife and that they would live happily ever after. Surprisingly, I found the torture scenes more graphic and more realistic than the torture scene in Zero Ground Thirty which tracks 10 years or so in the life of the war on terrorism.

Tarantino always was effective depicting both psychological and physical torture. In Django Unchained he shows that he hasn’t lost his touch. Once again, he’s a master, and for all his gestures toward freedom and tolerance, his latest picture feels like yet another exercise in black-faced comedy.

There are no white characters who darken their faces to play black men. But the whole film feels like master Tarantino in blackface, making fun of Hollywood Westerns, Southern crackers, and the kind of Uncle Toms who first appeared in Harriet Beecher Stowe’s Uncle Tom’s Cabin. How many clichés did I count in Django? There were so many I lost count.

[Jonah Raskin is a professor emeritus at Sonoma State University, a frequent contributor to The Rag Blog, and the author of For the Hell of It: The Life and Times of Abbie Hoffman, and the editor of The Radical Jack London: Writings on War and Revolution. Read more articles by Jonah Raskin on The Rag Blog.]