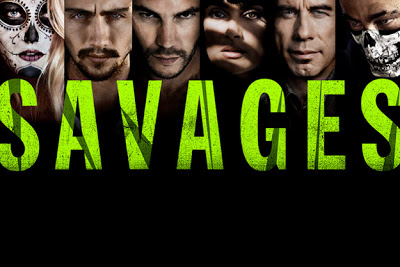 Good and bad run along parallel tracks in Savages, which might well be described as Butch Cassidy and the Sundance Kid meets The Last of the Mohicans.

“In a bad, bad world, drugs are good,” the narrator of Savages, Oliver Stone’s new, explosive pot picture, says near the start of the non-stop action.

The world in Savages, which is mostly Southern California and Northern Mexico, is a very bad place, indeed. The DEA agent, played by John Travolta, is very bad. The gangsters, thugs, and killers in the Mexican cartels are bad, too, though, of course, not everyone in Savages is equally bad. The narrator, Ophelia, better known as “O,” is good, though she does bad things, and her two boy friends and lovers, Ben and Chon, are also good, though they also do bad things.

It’s a long, long way from the Cheech & Chong comedies, such as Up in Smoke, and, though Stone himself smokes dope and apparently enjoys smoking it, in Savages he doesn’t indulge in the playful, the innocent, and the goofy. He’s hard-edged, hardboiled, and just plain hard.

The ugly Mexican drug dealers are the bad savages. The beautiful Californian weed growers and distributors are the good savages. Stone makes it very simple, though in the spirit of duality, he provides two endings to the picture, one happy and the other unhappy.

The Mexicans are dark and the Californians are blond. The head of one of the Mexican cartels is a dark-skinned, dark-haired, darkly sinister beauty named Elena, played by sexy Salma Hayek.

Ben is a latter-day, idealistic hippie, though in a bloodbath, he learns that to survive he has to kill. His buddy and pal, Chon, is a veteran of the war in Iraq and an expert in sabotage, explosive devices, and hand-to-hand combat. His skills comes in handy when he, Ben, and their gang take on the Mexicans.

The New York Times film critic, A. O. Scott, calls the picture a “mess,” but it’s a very tidy mess, with parallel construction, and nice neat dualities, including two kidnappings and a final meeting in the desert in which Elena’s dark-skinned daughter, Madga, is exchanged for the fair-haired blonde, Ophelia.

The movie feels like a replay of the kidnapping, and the subsequent freeing, of the hostages held by the savages that takes place in James Fenimore Cooper’s 1826 novel, The Last of the Mohicans, and in hundreds of similar cinematic scenes in which hostages are freed.

There are no pot doctors in Savages, no medical marijuana patients, and no activists eager to make weed legal. Needless to say, Stone hasn’t made a documentary that accurately reflects the world of weed today, but a moralist tale that seems to say that if you want to survive in the bad, bad world you have to do bad things, and you have to execute them better than the worst of the bad guys. Hey, blowing stuff up can be a fun adventure!

The ending isn’t ever really in doubt. Stone loves his beautiful savages, Olivia, Ben, and Chon, too much to let them perish, though he puts them through the wringer. Ben grows and sells drugs to help poor people in Africa and Asia; Chon sells and deals because he’s a veteran of combat and needs to decompress from the war zone in Iraq. Weed, sex, and hi-jinks are his therapy. Olivia smokes weeds because she’s a spoiled rich girl who never has had any parenting, not until she meets Elena.

The ugly savages, including the sadistic Lado, played beautifully by Benicio del Toro, are too ugly and too evil to get away with their despicable deeds. Stone won’t let them. You can’t accuse him of being soft on crime, or letting the real criminals get away with illegal activity.

The characters smoke dope and try to act as though they’re stoned, though they’re unconvincing. There are also marijuana plants on screen. They’re clearly not real plants, but rather the artificial variety probably made with silk and bamboo.

Ophelia provides the audience with background information about weed in her voiceovers, but much of it is woefully out-of-date. In California, top-drawer weed does not sell anywhere near $6,000 a pound, as she suggests, but more like $1,500. That’s because there’s a glut on the market in California, with more people growing more marijuana than ever before, and supply out-distancing demand by the ton, despite the recent (2012) wave of raids by the Feds on marijuana dispensaries and marijuana plantations.

In Savages, all of the criminals and all of the dealers have computers and cell phones, but nearly everyone does these days whether they’re in remote Mexican villages or in big cities on both sides of the border. Still, it’s fun to watch the druggies use the latest technology.

Dennis, the double-dealing, triply-corrupt DEA agent, tells Ben and Chon, “It’s only a matter of time before they legalize it.” Savages doesn’t suggest how that might happen, and how much time it might take.

What’s more, the Obama White House, the DEA, and all the drug warriors, show no signs whatsoever of planning to end the war on marijuana or any other drug. It’s a savage war that has taken the lives of tens of thousands of people, both Mexicans and Americans, and, in an election year in which every vote counts, Obama seems to be betting than the war on marijuana will win him more votes than it will lose him. He’s probably right.

Don’t expect the civilized savagery on both sides of the border to let up anytime soon. In the meantime, Oliver Stone’s dualistic drama offers viewers two distracting, suspenseful hours that will probably keep them on the proverbial edge of the seat, wondering who might be wacked next and who might survive the bad, bad world.