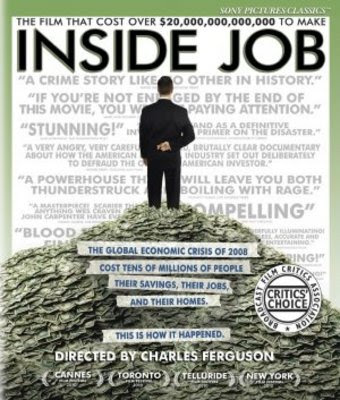 A fair summary of the award-winning documentary Inside Job is this: The economic crisis that culminated in bailouts in 2008 was caused by 30 years of deregulation of the financial services industry.

I have no way of knowing how many of the Occupy Wall Street participants have seen this film, released in 2010, but after seeing it, my first reaction is that occupying Wall Street and every other financial center from Chicago to your local guilty national bank is an appropriate response to what 99% of the American people have been going through.

It deserves such awards for its clarity, reasoned argument, and presentation of damning evidence that Wall Street, several Congresses, and every president from Reagan through George W. Bush share responsibility for the wreck of the economy through actions of the financial sector and inactions of the government brought about by deregulation.

Had Barack Obama been president before the bailouts began, he would be implicated as a guilty party as well. What Obama has done since taking office in 2009 is appoint many of the major players who caused the debacle to positions of power and influence over the institutions that created the devastating failure that gave us soaring unemployment, massive home foreclosures, the failure or near-failure of most of the major financial institutions in the U.S., and a stock market that for the second time in a decade robbed the savings, investments, and pension plans of America’s middle class.

Film critic Roger Ebert described Inside Job as “an angry, well-argued documentary about how the American financial industry set out deliberately to defraud the ordinary American investor.” While some might take a less harsh view of the financial sector, the evidence supports Ebert’s statement.

We have known since the savings and loan debacle, junk-bond scandals, and accounting firms’ deceit in the 1980s, created largely by Reagan’s deregulation of S&L’s, that without significant regulation, the greed inherent in the financial sector will disrupt, if not destroy, the economy. That debacle was followed in 1998 by the collapse of the speculative hedge fund Long-Term Capital Management.

Then came the dot-com bubble in the late 1990s, which culminated in the stock market crash of 2001, caused by the failure of Internet stocks that were falsely rated as sound investments by investment banks. In 2001, we experienced the bankruptcy of the energy and commodities company Enron. In 2006, the housing bubble peaked, and prices began dropping nationwide. Here Inside Job picks up the deregulation story.

In 2005, the chief economist of the International Monetary Fund, Raghuram Rajan, at a meeting to honor retiring chairman of the Federal Reserve, Alan Greenspan, warned of a “catastrophic meltdown” of the economy. He argued that financial sector managers were encouraged by great financial rewards to take extraordinary risks with other people’s money that could “generate severe adverse consequences,” with no penalties for the financial sector managers.

Rajan presciently described what happened during the 2007-2008 economic collapse: the failure of the massively-issued subprime mortgages, the complicated investments known as derivatives and credit derivative obligations, the leveraging of the assets of investment banks by a factor of 33 to 1, the insuring against failures of these complicated investments (which led directly to the bankruptcy of AIG), the mismanagement of the public-private housing guarantors Freddie Mac and Fannie Mae, and the catastrophic stock market decline.

Rajan was ridiculed immediately for his views by Lawrence Summers, who called Rajan a “Luddite.” Summers, an economist, had worked in the Reagan administration on the staff of the Council of Economic Advisers, as Chief Economist for the World Bank in the early 1990s, had been Secretary of the Treasury under President Clinton, and was President of Harvard from 2001 to 2006.

During this time, Summers had promoted the deregulation of the financial sector, along with other notables, including Ben Bernanke, Robert Rubin, Hank Paulson, and Timothy Geithner, all of whom have also worked in some economic capacity for the Obama administration. Yet none of these men were willing to be interviewed for Inside Job about what caused the Great Recession in which we are still mired.

Many journalists and economists have written books and articles dissecting what went wrong with the economy three years ago, but none of them have made the subject as accessible to the average non-economist as Charles Ferguson does in this documentary.

Ferguson describes the inbreeding between the financial sector and government, with major players moving from government regulatory and policy positions into the financial companies and banks and back again, often being paid huge sums for speeches ($135,000 to Lawrence Summers for a speech to Goldman Sachs, for example) and economic opinions that bolster these private investment banks as well as whole countries, such as Iceland.

None of these speeches and reports were critical of the financial practices of the companies or of the countries involved. Ferguson also criticizes the lack of accountability of academic economists to their institutions or to the public for their uncritical income-producing extra-curricular work.

And some of the mortgage derivatives sold by Goldman Sachs included mortgages written, on average, at 99.3% of the value of the homes that were mortgaged. This means that there was no room for any adverse circumstance. If a family doesn’t have income for even half a month, it is unlikely that they will be able to pay the mortgage. If a house is foreclosed on, the bank can’t possibly get back anything close to the amount of money it has loaned on the house because the loan approached 100% of its value.

Inside Job makes clear that if the American public is to be the rescuer of the financial sector, spending trillions of dollars to bail out the irresponsible gambling industry we call investment banking, then it needs to be re-regulated to put back in place the rational rules and practices that prevented disasters such as the ones we experienced in 2001 and 2008.

From the time of the Great Depression until the early 1980s, we averted such massive failures in the financial sector by appropriate regulation. A prudent country would protect itself against a recurrence of such financial debauchery and irresponsible behavior as was exhibited for the last 30 years by the financial sector of our economy.

Inside Job can be rented through Netflix and other sources, as well as viewed free on-line. It is worth seeing, if for no other reason than it makes understandable what Occupy Wall Street is all about.

Woody Guthrie wrote a song many years ago about an outlaw and bank robber that included this verse:

Yes, as through this world I’ve wandered
I’ve seen lots of funny men;
Some will rob you with a six-gun,
And some with a fountain pen.

Those with fountain pens have the upper hand now, and they are not being held accountable. We the people need to change that.