FILM : Michael Reynolds: "We Shoot from the Hip" 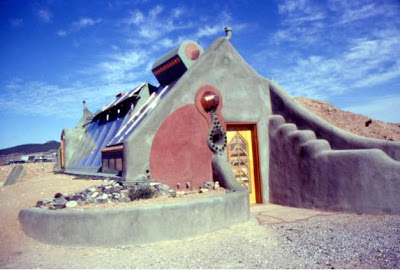 Refuse-nik: Michael Reynolds’ home in Taos, New Mexico, where he built a community of ‘earthships’ out of waste materials
Earthship Enterprise: The Ultimate Eco-House
by Rob Sharp

They are eco-friendly, bizarre-looking bolt holes, and have earned the name “earth ships” for the simple reason that they appear to have landed from the future. But these homes are more than just wacky props. They are a blueprint for our future living habits.

The ziggurats – constructed from refuse such as beer cans – are the brainchild of Michael Reynolds, an eco-architect who has spent most of his professional life perfecting the concept, which derives its name from the earth-filled tyres that make up the walls. He built the first example in Taos, New Mexico, in 1988 and, 20 years later, still lives there.

Due to his hard work, there are more than 1,000 “earth ships” across New Mexico, and the word has spread; hundreds more are springing up in the US, in Scotland, Normandy, Spain and even Siberia, and in April 2007, permission was granted to build 16 in Brighton. Now, Reynolds’ life and work are celebrated in Garbage Warrior, a documentary screening in cinemas around the UK.

“Imagine a home that heats itself, that provides its own water, and grows its own food,” says Reynolds. “Imagine that it needs no expensive technology, it recycles its own waste, and it has its own power source. And now imagine that it can be built anywhere, by anyone, out of the things that society throws away.”

The documentary was the idea of Oliver Hodge, a Brighton-based director who met Reynolds in May 2003. The architect and his “crew” had come on a two-week visit to build a prototype earth ship in Brighton. “When I met Mike I was so inspired and I could see that he would be able to create a strong story. I realised that he had won and lost all these battles: that he is a frontline activist for social change.”

In November that year, the filmmaker took a team to Reynolds’ US base. Soon, he realised he had arrived “in the middle of something massive”, so spent the next three years jetting between the UK and New Mexico, following his man around. Reynolds was a perfect subject, says Hodge: “He would do anything for me. Sometimes I even got him up at five o’clock in the morning.”

The film is the latest chapter in Reynolds’ colourful life. He graduated from architecture school in 1968, and soon produced a house made from beer containers, which upset the national bricklayers’ union so much, he had to can it.

Inspired by the nascent green movement, Reynolds came up with a building that promoted several tenets: it should be “off-the-electricity-grid” (which could be achieved by solar power); it should be made from used car-tyres (common landfill material) and incorporate rainwater-recycling facilities, too.

To achieve this vision, he moved in the early Seventies to the desert near Taos, where tolerant planning laws and sympathetic local government enabled him to experiment: some houses looked like castles, others like pyramids. Over the next 25 years, he created an energy-independent community, but his flouting of regulations landed him in hot water: and, in 1997, his communities were shut down.

The documentary joins the architect soon after, and charts his long battle with planners. “In my opinion, the planet situation is so critical we need to be doing anything we can,” he explains. “My rationale is that any little roof leak or system glitch in one of my single family homes, compared to the alternatives, is nothing. To me it’s important to go for it and make a few mistakes.”

Frustrated by his lack of progress, in early 2005 Reynolds heads to the Nicobar Islands in the Indian Ocean, which had been devastated by the Asian tsunami. His hope? That the lack of infrastructure would render the “bureaucratic niceties” irrelevant. “We shoot from the hip,” Reynolds says of the excursion. “We are always out of our depth whenever we go abroad, which happens three or four times a year. It may not be to local codes or ready to sell to a millionaire, but it will be shelter which will keep people comfortable. We have a method.”

Now, back in Taos, the architect is focusing on his latest project, “the Phoenix”. He says it will house a family of four, will keep them alive in “every way”, with its sewage treatment facilities as well as sustainable water, electricity, and food supplies. “There’s no question that after you’ve gone down a trail you might find a better way of going down it,” he concludes. “I would make alterations in my path, but it wouldn’t be that much different. I don’t think it’s possible to do anything without getting into a little trouble.”

This entry was posted in RagBlog and tagged Economy, Sustainability. Bookmark the permalink.