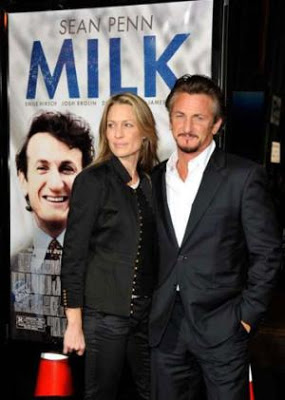 Sean Penn stars as Harvey Milk in the Hollywood biopic. Photo from Getty Images.
The release of a Hollywood biopic about Harvey Milk, America’s first openly gay elected politician, could not be more timely.
By Guy Adams / October 30, 2008

Video: See trailer from ‘Milk,’ Below.

The streetcars are being renamed and the red carpets rolled out in the Castro district of San Francisco for the world premiere of Milk, the latest film to break Hollywood’s long-running taboo over homosexuality.

A roar of approval greeted Sean Penn and Josh Brolin as they swept past several hundred people who had gathered on Tuesday to applaud the biopic of Harvey Milk, America’s first openly gay elected politician who was assassinated in a corridor of the nearby City Hall 30 years ago.

Many in the crowd also used the occasion to protest, waving signs urging “Vote No on Proposition Eight”. The measure would eliminate same-sex marriage in California if it were to be passed next week, and the battle serves as a topical reminder of how much still stands in the way of the movement that has elevated Milk to iconic status.

The colourful event brought considerable star power to Castro Street, the main street through the most famous gay and lesbian district in San Francisco, where Milk’s reign as city supervisor was cut short after he was shot and killed along with the Mayor, George Moscone, having served only 11 months in office.

The actors Emile Hirsch, Diego Luna, and the director Gus Van Sant – the man behind the 1997 film Good Will Hunting – were joined by local politicians, together with Milk’s old friends and contacts, many dressed as Seventies drag queens.

Yet it also highlighted a serious and pressing case of history repeating itself. Three decades ago, Harvey Milk was responsible for leading the campaign against a ballot measure that seems eerily reminiscent of Proposition Eight.

Proposition Six would have banned gays from teaching in California on the grounds that homosexuals were, at the time, considered more likely to be motivated by paedophilia. Milk’s against-the-odds success in defeating the ballot measure is still seen as one of the most inspiring victories in the gay rights movement.

“Harvey Milk was prophetic, a pioneer of gay rights at a time when people needed it most,” said Peter Novak, a researcher on Milk’s career at the University of San Francisco, who also had a role as an extra in the film. “He was articulate and founded a defence for the movement that continues to this day. His death was also a significant moment in recognising what was at stake in the struggle for equality. He used to say: ‘if a bullet should enter my brain, let it destroy every closet door,’ and he knew his death would propel the gay rights movement forward.”

Milk, who is played by Penn in the film, was assassinated by a right-wing former city supervisor called Dan White (Brolin), who was upset by the premature demise of his own political career.

Having been brought up in New York, Milk served in the US Navy, and became politically active after moving to San Francisco in the early Seventies. A gift for speechmaking that has seen him widely compared to Barack Obama, helped him to forge links with the local electorate, trade unions, and the city’s Asian community. He was elected to office at the third time of asking in 1977.

The new film, which charts Milk’s life, comes almost a quarter of a century after Rob Epstein’s The Times of Harvey Milk won an Academy Award for best documentary.

The new film features a scene in which Penn enjoys a long French kiss with his co-star, James Franco. In a recent interview, Franco revealed that shortly after the scene was shot, Penn text-messaged his former wife Madonna saying: “I just popped my cherry kissing a guy. I thought of you, I don’t know why.” The singer texted back: “Congratulations!”

Although Milk’s career as an elected official lasted only 11 months, he pioneered several major pieces of equal rights legislation. His anti-Proposition Six campaign culminated in an Obama-like appeal for gay people and civil rights advocates to contribute “just one dollar” to fight the measure. Yet it came to an end on 27 November, 1978, in a wood-panelled corridor of San Francisco’s City Hall. Appropriately enough, this is where thousands of local gay couples have been married in the months since California’s Supreme Court voted to make same-sex weddings legal.

Dan White had resigned after a political dispute with Milk and other supervisors, claiming that his salary was not enough to carry out the job. A few days later, he changed his mind and asked Moscone to rescind the resignation. When that request was refused, he blamed the Mayor and Milk in equal measure.

Though he hadn’t previously shown signs of violence, the refusal affected White badly. A few days later, he broke through a downstairs window of City Hall to avoid metal detectors and killed Milk and Moscone with hollow-pointed bullets from a revolver.

At the trial, White was sentenced to seven years for involuntary manslaughter, having convinced the jury he had carried out the killing on a whim as he hadn’t slept for days and had been bingeing on junk food. It is now seen as one of the worst miscarriages of American justice.

His successful use of the so-called “Twinkie defence,” named after the snack that White blamed for his state of mind, meant that the plea of “diminished capacity” was later expunged from Californian law. The sentence caused small-scale riots, and inspired the gay rights movement to secure Milk’s legacy.

Today, the tale will again be thrust to the centre of the public’s consciousness. “Harvey Milk is a true American hero,” Van Sant told reporters on the red carpet on Tuesday. “He’s a great example of a man representing his community and city.”

Gavin Newsom, San Francisco’s Mayor, who pioneered same-sex marriage in California, and helped to install a bust of Milk at City Hall, announced that a streetcar used in the filming would be renamed in Milk’s honour, saying: “This story couldn’t have happened anywhere else.”

In Hollywood, the film’s nationwide release later this month is sparking widespread debate over how its production company, Focus Features, will try to sell to middle America a title which contains several explicitly homosexual scenes.

Only a small number of advertisements have been bought, and the film’s trailer has received limited showings. Producers have kept it away from film festivals and are restricting media screenings, in a strategy aimed to make it become a “word of mouth” success like the 2005 film Brokeback Mountain starring Heath Ledger and Jake Gyllenhaal.

They may still face an uphill struggle. “At a recent Vegas test-screening for a middle-class, straight audience, several senior citizens tried to leave after a gay love scene in the early moments, but couldn’t because they were trapped in the middle of a row,” according to the Hollywood Reporter this week. “The seniors eventually said they were happy that they stayed but, like independent voters in an election contest, these are the very viewers that Focus must woo.”

A week before one of the most crucial ballots in the history of gay rights in the USA, the marketing conundrum inspired by Milk’s biopic provides the movement he prematurely left behind with a graphic reminder of the troubles it still faces.

“You know, the fact that we are still at a stage where you cannot market this as a mainstream film shows how far we still have left to come,” said Mr Novak.

* Born in 1930, Milk was popular at school and studied at New York State Teachers College.

* He served in the navy during the Korean War and then worked as a banker.

* He became the first openly gay city official in California in 1977.

* He was shot dead later that year.

1 Response to FILM / ‘Milk’ : The Man Who Set America Straight About Gay Rights