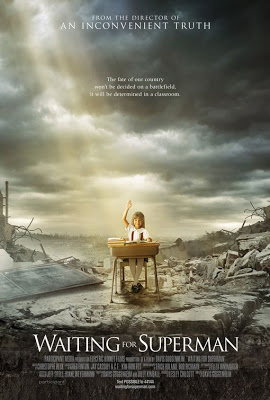 Davis Guggenheim’s 2010 film Waiting for Superman is a slick marketing piece full of half-truths and distortions. The film suggests the problems in education are the fault of teachers and teacher unions alone, and it asserts that the solution to those problems is a greater focus on top-down instruction driven by test scores.

It rejects the inconvenient truth that our schools are being starved of funds and other necessary resources, and instead opts for an era of privatization and market-driven school change.

Its focus effectively suppresses a more complex and nuanced discussion of what it might actually take to leave no child behind, such as a living wage, a full-employment economy, the demilitarization of our schools, and an education based on the democratic ideal that the fullest development of each is the condition for the full development of all. The film is positioned to become a leading voice in framing the debate on school reform, much like Guggenheim’s An Inconvenient Truth did for the discussion of global warming, and that’s heartbreaking.

I’m not categorically opposed to charter schools; they can and often do allow a group of creative and innovative teachers, parents, and communities to build schools that work for their kids and are free of the deadening bureaucracy of most districts. These schools can be catalysts for even larger changes.

But there are really two main opposing positions in the “charter movement” (it’s not really a movement, by the way, but rather a diverse range of different projects). On one side are those who hope to use the charter option to operate effective small schools that are autonomous from districts. On the other side are the corporate powerhouses and the ideological opponents of all things public who see this as a chance to break the teacher’s unions and to privatize education.

Superman is a shill for the latter. Caring, thoughtful teachers are working hard in both types of schools. But their efforts are being framed and defined, even undermined, by powerful forces who have seized the mantle of “reform.”

The film dismisses with a side comment the inconvenient truth that our schools are criminally underfunded. Money’s not the answer, it glibly declares. Nor does it suggest that students would have better outcomes if their communities had jobs, health care, decent housing, and a living wage.

Particularly dishonest is the fact that Guggenheim never mentions the tens of millions of dollars of private money that has poured into the Harlem Children’s Zone, the model and the superman we are relentlessly instructed to aspire to. Those funds create full family services and a state of the art school.

In a sleight of hand, the film magically shifts focus, turning to “bad teaching” as the problem in the poor schools while ignoring these millions of dollars that make people clamor to get into the Promise Academy. As a friend of mine said, “Well, at least now we know what it costs.”

It is so sad to see hundreds of families lined up at these essentially private schools with a public charter cover, praying to get in. Who wouldn’t want to get in? Families are paraded in front of the cameras as they wait for an admission lottery in an auditorium where the winners’ names are pulled from a hat and read aloud, while the losing families trudge out in tears with cameras looming in their faces. Guggenheim gleefully films it all, indulging in what amounts to family and child abuse.

After dismissing funding as a factor, Superman rolls out the drumbeat of attacks on teachers as the first and really the only problem. Except for a few patronizing pats on the head for educators, the film describes school failure as boiling down to bad teachers.

Relying on old clichés that single out the handful of loser teachers anyone could dig up, Waiting for Superman asserts that the unions are the boogeyman. In his perfect world, there would be no unions — we could drive teacher wages even lower, run schools like little corporations, and race to the bottom just as we have in the manufacturing sector.

Imagining that the profit motive works best, the privatizers propose merit pay for teachers whose students test well. Such a scheme would only lead to adult cheating (which has already started), to well-connected teachers packing their classes with privileged kids, and to an undermining of the very essence of effective schools — collaboration between teachers, generous community building with students.

It is interesting to note that Arne Duncan’s kids, as well as the Obama kids, attended the University of Chicago Lab Schools — where teachers had small classes, good pay, and, yes, a union. Students did not concentrate on rote learning and mindless drill and skill or test prep. They were offered in part an exploratory, questioning curriculum. The school for the Obama kids in D.C., Sidwell Friends, also has a unionized faculty. But apparently the masses need to have sweatshop schools.

Waiting for Superman sets up AFT president Randi Weingarten as its Darth Vader — accompanying her appearance on the screen with dire background music. They tell us that the teachers unions have put $50 million into election campaigns over the last 10 years, essentially buying politicians. Actually, this number is a pittance compared to what corporations and the rich throw in. It is less than Meg Whitman spent of her own money in one run for governor of California.

But the film carefully avoids interviewing Diane Ravitch, the lead organizer of the Education Trust and No Child Left Behind efforts who has been lately writing and speaking about her realization that these reforms have had a disastrous effect on schools and teaching and learning.

When African American and Chicano Latino families in the 1960’s were demanding quality education and access to the resources of the best schools, they were also rejecting the myths about blackness meaning culturally deprived. Today that social revolution has been effectively set back. Schools are more segregated today than before Brown v. Board of Education in 1954; nothing is said about that. Black and Brown students are being suspended and expelled, searched and criminalized; not a word.

In place of a movement for transforming power relationships in our society, privatizers and corporate managers step up to define the problem — proposing a revolution that is anything but revolutionary.

A strong project of education transformation would recognize the funds of knowledge urban students come to school with; it would honor the literacy and language practices of the community. It would support a curriculum of questioning, as students examine their world and imagine ways to make it better.

It would put front and center the need to build learning communities, to motivate students to want to learn and believe there is something worth learning. It would create an engaged learning experience for all students, not just the handful who learn to endure boredom and insult in hopes of high income later.

In the hands of these so-called reformers, though, the only goal is to train urban students to be obedient followers; they never propose a project that transforms and empowers communities, only holding out the promise for a few exceptional students to escape the ghetto. Y

ou can see white middle class audience members sighing, comforted to know that everyone really wants to be like us; that everyone who is not like us is tragic. The film bubbles over with terms like escape and rescue, promoting a liberal charity mentality that is never in solidarity with the local community, only regards it as something dysfunctional that needs to be controlled.

In addition, Waiting for Superman promotes the idea that we are in a dire war for U.S. dominance in the world. The poster advertising the film shows a nightmarish battlefield in stark grey, then a little white girl sitting at a desk is dropped in the midst of it. The text: “The fate of our country won’t be decided on a battlefield. It will be determined in a classroom.”

This is a common theme of the so-called reformers: we are at war with India and China and we have to out-math them and crush them so that we can remain rich and they can stay in the sweatshops. But really, who declared this war? When did I as a teacher sign up as an officer in this war? And when did that fourth grade girl become a soldier in it?

I have nothing against the Chinese, the Indians, or anyone else in the world — I wish them well. Instead of this Global Social Darwinist fantasy, perhaps we should be helping kids imagine a world of global cooperation, sustainable economies, and equity

Waiting for Superman accepts a theory of learning that is embarrassing in its stupidity. In one of its many little cartoon segments, it purports to show how kids learn. The top of a child’s head is cut open and a jumble of factoids is poured in. Ouch! Oh, and then the evil teacher union and regulations stop this productive pouring project.

The filmmakers betray no understanding of how people actually learn, the active and agentive participation of students in the learning process. They ignore the social construction of knowledge, the difference between deep learning and rote memorization. The film unquestioningly bows down to standardized tests as the measure of student knowledge, school success. Such a testing regime bullies aside deeper learning, authentic assessment, portfolio and project based learning.

Yes, deeper learning like this is difficult to measure with simple numbers — but we can’t let the desire for simple numbers simplify the educational project. Extensive research has demonstrated definitively that standardized testing reproduces inequities, marginalizes English Language Learners and those who do not grow up speaking a middle class vernacular, dumbs down the curriculum, and misinforms policy. It is the wisdom of the misinformed, accepted against educational evidence and research. Never mind, they declare: we will define the future of education anyway.

Sadly, the narrow and blinkered reasoning in Waiting for Superman is behind the No Child Left Behind disaster rebranded as Race to the Top. Don’t believe the hype. We can and we must do education, and educational change, much differently. We could develop an economy that supported communities which are well-resourced and democratic. We can right now create pathways in which all kids have a reasonable prospect of an honorable, interesting job in their future. And if democracy and the future society concern us at all, we can and we must create schools which unleash students’ creativity, imagination, and initiative.

[Rick Ayers is a former high school teacher, founder of Communication Arts and Sciences small school at Berkeley High School, and currently Adjunct Professor in Teacher Education at the University of San Francisco. He is author, with his brother William Ayers, of the soon-to-be-released Teaching the Taboo from Teachers College Press. He can be reached at rayers@berkeley.edu .]