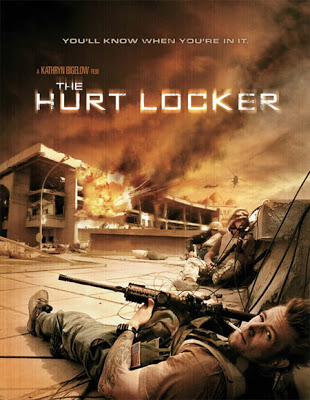 The Hurt Locker will deepen your understanding of what our soldiers have been enduring in Iraq for twelve to fifteen months at a stretch.

See ‘The Hurt Locker, Ticking Time Bomb of a Movie,’ by Scott Foundas, and Movie Trailer, Below.

Yesterday, I saw a powerful new Iraq War film, The Hurt Locker, directed by Kathryn Bigelow. While it’s a theatrical film, shot mostly in Jordan, it packs all the wallop of a down and dirty documentary. It focuses on the war experiences of three soldiers who are assigned to a IED detection and detonation unit… I found some of the scenes to be so intense that they were almost unwatchable. (Warning: some Iraq and Afghan combat vets may find this film emotionally overwhelming.)

I strongly urge everyone to make a special effort to see The Hurt Locker First, because . Second, because we need to talk up and support this kind of film so that it won’t just vanish from theatres in the next few days.

At present, I believe that it’s only playing in a few large cities. (It’s currently in six NYC theatres.) As often happens, it probably won’t be available in many communities (e.g., the Salmon Mall adjacent to Fort Drum in New York) that would most benefit from seeing it. I just fantasized that somehow we could make it available to every potential recruit before he or she signed their enlistment contract!

[Tod Ensign is a veteran’s rights lawyer and director of Citizen Soldier, a non-profit GI and veteran rights advocacy group.]

The Hurt Locker, Ticking Time Bomb of a Movie

Kathryn Bigelow’s Iraq War drama The Hurt Locker is a full-throttle body shock of a movie. It gets inside you like a virus, puts your nerves in a blender, and twists your guts into a Gordian knot.

Set during the last month in the year-long rotation of a three-man U.S. Army bomb squad stationed in Baghdad, it may be the only film made about Iraq — documentary or fiction — that gives us a true sense of what it feels like to be on the front lines of a war fought not in jungles but in cities, where bombs rise up from the ground instead of raining down from the sky, every narrow alley portends an ambush, and every onlooker is a potential insurgent.

It’s an experiential war movie — one that calls to mind the title of the 1950s docudrama series You Are There -— but also a psychologically astute one, matching its intricate sensory architecture with an equally detailed map of the modern soldier’s psyche, a diagram of what motivates the volunteers in a volunteer army.

The movie begins with a typically bracing set piece in which the soldiers of Bravo Company’s Explosive Ordnance Disposal team come upon an IED planted in the center of a busy Baghdad marketplace. When their remote-controlled bomb-detonating robot hits a snag, the team’s affable leader (Guy Pearce) dons a thick Kevlar suit and attempts to set the charge manually. He does not return. His replacement, Staff Sergeant William James (Jeremy Renner), is a career soldier of an entirely different breed, one who prefers to handle bombs up close and personally instead of by remote control, and whose Kevlar suit is part of his daily wardrobe—not just for special occasions.

At first glance, Sgt. James seems like the closest thing to a stock character — the gonzo alpha male living out his childhood cowboy fantasies — in a picture markedly devoid of small-town rubes, poetry-quoting intellectuals, or any other easily reducible war-movie “types.” But like most things in The Hurt Locker, there is considerably more to him than meets the eye. Beneath his blustery macho surface, he may be the movie’s most intricately wired explosive device.

Written by former Village Voice columnist Mark Boal, The Hurt Locker belongs to that subset of Bigelow’s work — including her biker-gang debut The Loveless and the bank-robbing-surfers caper Point Break — devoted to the ethos of hyper-masculine communities, the men who choose to live in them, and those who emerge as their leaders.

Sgt. James is one such character, and Bigelow, Boal, and especially Renner excel at showing us how his reckless displays of bravado are both a coping mechanism and an addiction, a battlefield genius and a form of madness. A secular god with sports hero stats (873 disarmed bombs and counting!), he inspires envy in some, contempt in others, and both in the men under his command—two comparatively by-the-book sergeants (very well played by Anthony Mackie and Brian Geraghty) who also want to prove their mettle as men of war, as long as they go home in one piece.

But for James, who has an ex-wife and child waiting for him somewhere, the adrenaline-rush alterna-reality of Iraq is vastly preferable to the home front, with its prison of domestic responsibility. Like the jacked-in wire trippers of Bigelow’s futuristic Strange Days, he yearns for something more visceral, more cinematic than everyday life.

With her strength of revealing character through action, Bigelow comes closer to the tradition of Anthony Mann, Sam Fuller, and other bygone practitioners of the classic Hollywood war movie than to today’s dominant breed of studio A-listers, who create (mostly incoherent) action at the expense of character. Not that The Hurt Locker, which I take to be the best American film since Paul Thomas Anderson’s There Will Be Blood, much resembles any war movie we’ve ever seen before. Here, combat is more often a solitary rather than a group endeavor — a lone man tracing a rat’s nest of wires back to its source, or exchanging long-distance fire with a single sniper across a vast desert expanse.

There is little, if any, talk about patriotism or homeland security, and there are fewer American flags on display than in any American war movie in memory. When The Hurt Locker premiered last fall at the Venice and Toronto film festivals, this prompted some observers to tag it as an “apolitical” war picture, which is really a way of saying that Bigelow’s film is mercifully free of ham-fisted polemics. Instead of setting out to prove a point, it seeks to immerse us in an environment — something Bigelow does with a conceptual rigor usually associated with those directors whose work is confined to film societies and art houses.

Time is Bigelow’s organizing principle here — the time left in Iraq for the men of Bravo company (displayed on the screen as chapter headings throughout), the time that ticks away between the discovery of a bomb and its eventual disarming or detonation, and the time that, in those unbearably tense moments, seems to stretch out indefinitely toward the horizon. War may be hell, but in The Hurt Locker, it’s also an incredibly pellucid waking dream.

This entry was posted in Rag Bloggers and tagged Criticism, Film, Iraq War. Bookmark the permalink.