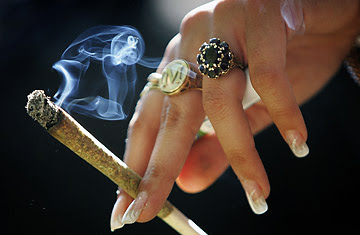 Why is this reasonably safe compound currently forbidden when its use, as well as that of many toxic hallucinogens, goes as far back as biblical times and may indeed have been instrumental in producing, in part, the Old Testament?

I have been following the health care debate in a series of articles for The Rag Blog, and anticipate doing so until the situation in the Congress is resolved. Today and in several future submissions I will digress, in part, to discuss an idea for partially financing a decent health care system in the United States akin to those in France, the Netherlands, Germany, and other industrialized nations.

I do this with a certain degree of apprehension as the mindset in this country results in an almost reflex reaction suggesting that an investigator into this subject matter is trying to attain some kind of personal gratification. Note: I have in 87 years NEVER used pot! To proceed….

Some months ago, online, I encountered a gentleman, a retired PhD in molecular biology, who was suffering from terminal lung cancer. He was mentally alert, and desired to remain so, without dulling his sensorium with opiates and sedatives. This I could well understand as he continuously produced a series of articles on the internet on science, theology, history and liberal political thinking. He introduced me to the new edition of the Jefferson Bible, a book any thinking person should find worthy of purchasing. He was surviving on marijuana which was supplied to him by a son who resided in a state where it is available for medical use.

The gentleman found that, smoking a cigarette several times a day, his discomfort was assuaged, that he could function intellectually, and that on X-ray several of the metastatic lesions were actually reduced in size. Unhappily, I have not heard from this outstanding human being in the past several weeks, thus am quite apprehensive, but the prior communication got me to thinking.

Why is this medication forbidden to other terminally ill patients to relieve the distress of their final days? Why, indeed, the prejudice against cannabis in the United States when it is available in many of the enlightened countries of the Western World? Why this peculiar mind-set when we see opium derivatives and various mind altering prescription drugs prescribed, and advertised on television, with impunity? Why is this reasonably safe compound currently forbidden when its use, as well as that of many toxic hallucinogens, goes as far back as biblical times and may indeed have been instrumental in producing, in part, the Old Testament?

Thus, I began to consider the financial and medical advantages to legalizing the substance and taxing it we do alcohol and tobacco. Concurrently, I encountered an excellent article by Clive Crook, entitled “A Criminally Stupid War on Drugs.” The author points out that legalization/taxation could net the U.S. treasury $100 billion a year. This would surely be a fine down payment on single payer/universal health care. Further, it would reduce the cost of imprisoning an estimated 500,000 people, the vast majority merely for possession, which is more folks than are imprisoned in Britain, France, Germany, Italy and Spain combined.

We will subsequently address the prejudice against this specific therapeutic agent, as opposed to many others on the market, with and without prescription, later in our discussions. It most assuredly needs further scientific and clinical investigation by the FDA and the NIH; however, there is evidence available that cannabis alkaloids may well be helpful in the treatment of Alzheimer’s Disease, various types of arthritis, asthma, brain cancer, breast cancer, glaucoma, head injuries, hypertension, and lung cancer and as a non-opiate, non-addictive pain killer. Many years ago I knew an oncologist who told his patients with severe nausea from chemotherapy where on the street their families could obtain cannabis. A regrettable way to care for the sick. Only in the USA!

An interesting but non-medical observation was called to my attention by an artist friend, that hashish was used toward the end of the 19th century in France where artists developed that strange but beautiful movement called Art Nouveau. Some art historians believe that the movement was directly related to hashish induced visions. Thus, surely if one is suffering through a terminal illness, and is in hospice care, the ability to retreat to a world of beautiful visions is surely preferable to living in a world of constant pain and suffering.

To understand this specific, near universal prejudice, one must understand the mindset in the United States. It’s all about profit, financial profit, though on the surface this might not always be apparent. We hear of concerns of a physical or moral nature; however, when the truth is out, it is about money and only about money. One must understand the pharmaceutical industry, as well as the health insurance industry, to fully appreciate how Washington is influenced. A good beginning is to read Dr. Marcia Angell’s The Truth About the Drug Companies. How They Deceive Us and What to do About it. In addition I would suggest reading “Marijuana Timeline In The United States.” We will pursue this further at a later time.

Meanwhile the fight regarding health care continues in Washington. This past Sunday Rick Scott subsidized libelous TV programming designed to untrack the debate regarding decent health care for the American people. Read “Rick Scott: Putting Profits Before People” from Think Progress. In addition, to understand the machinations behind the debate you should read “The Machinery Behind Health-Care Reform,” by Robert O’Harrow Jr. in the Washington Post.

The debate appears to center on the development of a “public health care option,” which surely would be more expensive, less efficient, and less inclusive than a single payer plan, which is desired by 65% of the public and physicians polled. However, our brave elected representatives feel a need, largely financial, to accommodate the health insurance industry, and this “compromise.” One shudders at a recent suggestion by Sen. Kennedy of Medicaid for all with an income of something like $100,000. Frightening that Sen. Kennedy has not a glimmering of an idea as to the lack of medical care this would produce. These unfortunate folks would not be able to find a physician, as the Medicaid program pays approximately 50% of a physician’s normal fee, and an influx of patients with this type of “insurance” would destroy an honest physician’s ability to meet his overhead. Even the suggested “Medicare For All” has its drawbacks as well elucidated by Joe Paduda in Campaign For America’s Future;

As I watch our elected representatives and the insurance and pharmaceutical cartels struggling with the health care issue, I am carried back to a paragraph by Walt Whitman — quoted by Peter Quinn in a recent issue of Commonweal — as he summed up the meta-partisan ethic of the kleptocracy:

“The depravity of the business classes of our country is not less than has been supposed but infinitely greater. The official services of America, national, state, and municipal, in all their branches and departments…are saturated in corruption, bribery, falsehood, and mal-administration.”