Firefighters: Mostly Paramedics in Some Places 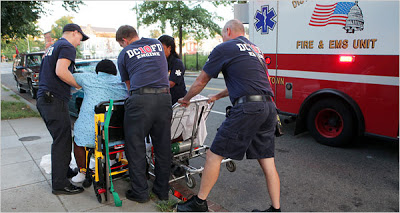 WASHINGTON — Peeling off his latex gloves after treating a 4-year-old boy having a severe asthma attack, J. R. Muyleart sighed with a touch of frustration. It was 3 a.m. and in the past 24-hour shift, Mr. Muyleart, a firefighter, had responded to at least one emergency call per hour.

But only two of those calls were for fires; most of the others involved heart attacks, diabetic sores, epileptic seizures and people complaining of shortness of breath.

“I joined the force to battle blazes, not to be an emergency room doctor,” Mr. Muyleart, 35, said as he and the rest of Engine Company 10 drove back to their firehouse, which for most of the last 15 years has been the busiest in the country, according to industry surveys.

Among the hidden costs of the health care crisis is the burden that fire departments across the country are facing as firefighters, much like emergency room doctors, are increasingly serving as primary care providers.

About 80 percent of the calls handled by Engine Company 10 are medical emergencies because the firehouse serves one of the city’s poorest areas, where few residents have health insurance, doctors’ checkups are rare, and medical problems are left to fester until someone dials 911.

In many big cities, the problem is compounded by budget shortfalls that have led to the elimination or proposed elimination of 6,000 firefighter jobs in the past year, or about 2 percent of all firefighters, according to the International Association of Fire Fighters. At the same time, emergency calls have increased by 1.2 million, or 3.5 percent, compared with the year before.

Washington’s fire department, which has not faced major layoffs, is dispatched along with Emergency Medical Services to almost all emergency calls in the belief that it can provide the quickest response. It gets more such calls per capita than just about any other fire department in the nation, and a disproportionate number come from poorer neighborhoods like Trinidad, where Engine 10 is based, in the Northeast section of the city.

Last year, Engine Company 10 handled more than 6,500 calls, about three times the national average, according to Firehouse Magazine. The relentless pace is one reason firefighters across the country compete for a chance to work at the firehouse, which is nicknamed the House of Pain.

“We get our share of fires here,” said Leo Ruiz, 35, as he finished his breakfast after returning from a call involving a woman with abdominal pains. “But what makes this place different is that in the down time you have to be running 24 hours straight to keep up with all the other calls.”

Suddenly, another firefighter yelled “Box!” Within 10 seconds, the fire engine was rolling, four firefighters on board, heading to the day’s first “box alarm,” or building fire.

“This is what we live for,” Mr. Ruiz said as he put on his oxygen tank.

At the scene, flames spilled out of a window. In 10 minutes the blaze was under control.

Shortly after returning to the firehouse, Engine Company 10 was dispatched again. “Man down, possible seizure,” the dispatcher said, to groans from several firefighters.

In the next 24 hours, the company took three calls involving asthma attacks, five for chest pains or shortness of breath, two for assaults and six for unconscious people on the sidewalk. The only other fire was a small one in a trash hauling bin.

“Guys complain about all the medical calls, but to me it’s work,” said Lawrence Jones, 24, a firefighter who grew up in the neighborhood and has been on the force two years.

Indeed, the shift in firefighters’ duties, which has been occurring for decades, is not without its up side for fire departments.

Advances in consumer protection rules and fireproofing technology have led to a drop in the frequency of fires, so medical emergencies have helped keep firefighters employed.

Fire departments nationwide responded to almost 1.5 million fire calls in 2008, compared with 3 million in 1980, according to the National Fire Protection Association. Fire departments went on about 15.8 million medical calls in 2008, up from about 5 million in 1980, a 213 percent increase. The shift has occurred as cities realized that firefighters could respond more quickly than ambulances, and more cities trained firefighters as emergency medical technicians.

For Engine Company 10, drug addiction and violent crime are added reasons there are so many medical emergencies. Last year, the neighborhood had so many drug-related shootings that the police set up checkpoints to inspect cars that entered or left the area.

Around 3 p.m., a call took Engine 10 back to 14th and H Streets, northeast. The corner is known by the firefighters as the “vortex of sickness” because the dispatcher sends them there five or six times per shift.

The four firefighters from the House of Pain arrived first to find a glassy-eyed man lying drunk on the sidewalk. Soon the police and an ambulance arrived, but the firefighters were already checking the man’s vital signs and trying to persuade him to stand up and move along or go to the hospital. Eventually he stood and stumbled away.

“Look around,” Mr. Muyleart said. “We have an ambulance and two cop cars here. Do we really need a fire engine and four firefighters as well?”

Some cities have questioned the cost of dispatching fire engines to medical emergencies, but most have determined that it is too risky not to always send the closest emergency personnel.

In St. Louis, Emergency Medical Services and the Fire Department merged in 1997 to save money. But the city fire chief, Dennis M. Jenkerson, still sends fire trucks on most medical calls.

“People call and say, ‘I’m having trouble breathing,’ ” Chief Jenkerson said. “Can they afford to wait five and a half, six minutes, for an ambulance? No. Seconds count with most medical emergencies.”

Most other departments also dispatch fire trucks to medical calls because firefighters are trained emergency medical technicians, cities have more fire trucks than ambulances, and fire stations are located throughout the city, said Lori Moore-Merrell of the International Association of Fire Fighters.

“If it’s a serious medical call, a fire, we sprint, regardless,” Mr. Muyleart said as he hustled to the truck after a caller reported chest pains. “It just seems like so many people use us as their primary care providers.”

4 Responses to Firefighters: Mostly Paramedics in Some Places