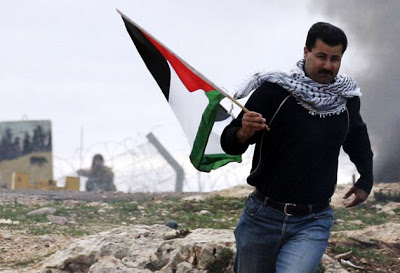 A Palestinian demonstrator holding a Palestinian flag flees as an Israeli soldier holds a position behind him. Photo: GETTY.
How can anyone believe there is ‘progress’ in the Middle East?
By Robert Fisk / December 27, 2008

If reporting is, as I suspect, a record of mankind’s folly, then the end of 2008 is proving my point.

Let’s kick off with the man who is not going to change the Middle East, Barack Obama, who last week, with infinite predictability, became Time‘s “person of the year”. But buried in a long and immensely tedious interview inside the magazine, Obama devotes just one sentence to the Arab-Israeli conflict: “And seeing if we can build on some of the progress, at least in conversation, that’s been made around the Israeli-Palestinian conflict will be a priority.”

What is this man talking about? “Building on progress?” What progress? On the verge of another civil war between Hamas and the Palestinian Authority, with Benjamin Netanyahu a contender for Israeli prime minister, with Israel’s monstrous wall and its Jewish colonies still taking more Arab land, and Palestinians still firing rockets at Sderot, and Obama thinks there’s “progress” to build on?

I suspect this nonsensical language comes from the mental mists of his future Secretary of State. “At least in conversation” is pure Hillary Clinton – its meaning totally eludes me – and the giveaway phrase about progress being made “around” the Israeli-Palestinian conflict is even weirder. Of course if Obama had talked about an end to Jewish settlement building on Arab land – the only actual “building” that is going on in the conflict – relations with Hamas as well as the Palestinian Authority, justice for both sides in the conflict, along with security for Palestinians as well as Israelis, then he might actually effect a little change.

An interesting test of Obama’s gumption is going to come scarcely three months after his inauguration when he will have a little promise to honour. Yup, it’s that dratted 24 April commemoration of the Armenian genocide when Armenians remember the 1.5 million of their countrymen – citizens of the Ottoman empire slaughtered by the Turks – on the anniversary of the day in 1915 when the first Armenian professors, artists and others were taken off to execution by the Ottoman authorities.

Bill Clinton promised Armenians he’d call it a “genocide” if they helped to elect him to office. George Bush did the same. So did Obama. The first two broke their word and resorted to “tragedy” rather than “genocide” once they’d got the votes, because they were frightened of all those bellowing Turkish generals, not to mention – in Bush’s case – the US military supply routes through Turkey, the “roads and so on” as Robert Gates called them in one of history’s more gripping ironies, these being the same “roads and so on” upon which the Armenians were sent on their death marches in 1915. And Mr Gates will be there to remind Obama of this. So I bet you – I absolutely bet on the family cat – that Obama is going to find that “genocide” is “tragedy” by 24 April.

By chance, I browsed through Turkish Airlines’ in-flight magazine while cruising into Istanbul earlier this month and found an article on the historical Turkish region of Harput. “Asia’s natural garden”, “a popular holiday resort”, the article calls Harput, “where churches dedicated to the Virgin Mary rise next to tombs of the ancestors of Mehmet the Conqueror”.

Odd, all those churches, isn’t it? And you have to shake your head to remember that Harput was the centre of the Christian Armenian genocide, the city from which Leslie Davis, the brave American consul in Harput, sent back his devastating eyewitness dispatches of the thousands of butchered Armenian men and women whose corpses he saw with his own eyes. But I guess that all would spoil the “natural garden” effect. It’s a bit like inviting tourists to the Polish town of Oswiecim – without mentioning that its German name is Auschwitz.

But these days, we can all rewrite history. Take Nicolas Sarkozy, France’s cuddliest ever president, who not only toadies up to Bashar al-Assad of Syria but is now buttering up the sick and awful Algerian head of state Abdelaziz Bouteflika who’s just been “modifying” the Algerian constitution to give himself a third term in office.

There was no parliamentary debate, just a show of hands – 500 out of 529 – and what was Sarko’s response? “Better Bouteflika than the Taliban!” I always thought the Taliban operated a bit more to the east – in Afghanistan, where Sarko’s lads are busy fighting them – but you never can tell. Not least when exiled former Algerian army officers revealed that undercover soldiers as well as the Algerian Islamists (Sarko’s “Taliban”) were involved in the brutal village massacres of the 1990s.

Talking of “undercover”, I was amazed to learn of the training system adopted by the Met lads who put Jean Charles de Menezes to death on the Tube. According to former police commander Brian Paddick, the Met’s secret rules for “dealing” with suicide bombers were drawn up “with the help of Israeli experts”. What? Who were these so-called “experts” advising British policemen how to shoot civilians on the streets of London? The same men who assassinate wanted Palestinians in the West Bank and Gaza and brazenly kill Palestinian civilians at the same time? The same people who outrageously talk about “targeted killings” when they murder their opponents? Were these the thugs who were advising Lady Cressida Dick and her boys?

Not that our brave peace envoy, Lord Blair, would have much to say about it. He’s the man, remember, whose only proposed trip to Gaza was called off when yet more “Israeli experts” advised him that his life might be in danger. Anyway, he’d still rather be president of Europe, something Sarko wants to award him. That, I suppose, is why Blair wrote such a fawning article in the same issue of Time which made Obama “person” of the year. “There are times when Nicolas Sarkozy resembles a force of nature,” Blair grovels. It’s all first names, of course. “Nicolas has the hallmark of any true leader”; “Nicolas has adopted…”; “Nicolas recognises”; “Nicolas reaching out…”. In all, 15 “Nicolases”. Is that the price of the Euro presidency? Or will Blair now tell us he’s going to be involved in those “conversations” with Obama to “build on some of the progress” in the Middle East?

2 Responses to Fisk: Obama Needs More Than Empty Rhetoric for Lasting Progress in the Middle East