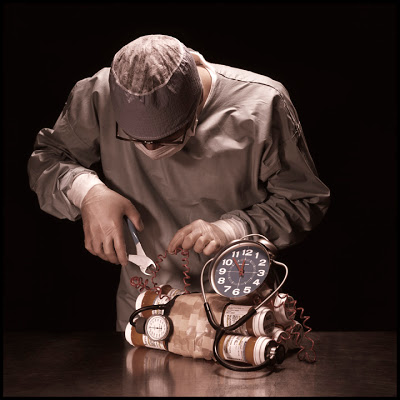 Our health care system is a ticking time bomb and the right wing opposes every effort to fix it. Photo/illustration by Mark Hooper / Stanford Medicine Magazine

The science is already published, especially by Scripps Institute, Harvard, Johns Hopkins, and many more, to reduce our bloated health care costs, and, praise President Obama, the new stimulus bill includes getting this information to doctors.

We spend way more than other countries, buying the most expensive — but not the best — treatments, but the right wants to keep it that way.

The Far Right’s All Out Offensive Against Medical Research

Mr. Limbaugh and his cohorts would have you believe that this research will be used to deny needed care to your great Aunt May and be run by the politburo.

Opponents of fixing our broken health care system are at it again, attempting to use their same old scare tactics and falsehoods to kill a common-sense health care provision in the economic recovery package. Fortunately Congressional leaders have recognized these tactics for what they are and have wisely kept this provision in the legislation.

Under attack is a provision that is in the package that will help your doctor be better informed and more effective at the job they signed up to do in the first place – taking care of you and your family.

At issue is something called “Comparative Effectiveness Research” which basically means giving your doctor access to the latest research on what treatments and therapies work and which don’t. This also helps doctors know which treatments are more expensive than others, and helps both patients and doctors decide if there is a cheaper treatment that is just as effective. As a doctor and the husband of a doctor, I know how important it is to have solid scientific research to make critical decisions for my patients.

This research will help doctors choose the best treatment for their patients’ situation and help them make more informed choices rather than risk prescribing less effective or even potentially harmful treatments.

Essentially, in order to control costs and provide patients with better care as we reform health care, the Federal Government will fund and disseminate research that evaluates the effectiveness of different treatments and medicines. This research will give doctors and patients better choices, and most importantly better health care for their money.

This is a common sense idea that should have been put in place a long ago.

When I was practicing medicine, having greater access to scientific evidenced-based research would have been truly helpful in guiding me to make the best medical decisions for my patients.

If an inexpensive pill that has been around a long time works substantially better than a brand new, highly-advertised and thus far more expensive pill – doctors should have that information at hand when we prescribe medications to our patients. When I do something for a patient, I want the scientific research that tells me its the best course for my patient. But the far right, led by people like Rush Limabaugh, hopes to somehow convince Americans that more and better research is a bad thing.

Medicine is and should always be science based – not driven by ideology.

Mr. Limbaugh and his cohorts would have you believe that this research will be used to deny needed care to your great Aunt May and be run by the politburo. But the Bill passed by Congress states right up front that the Government can not make coverage decisions based on this research.

I was surprised to see Senator Coburn (R-Ok) who is also a doctor make a statement against medical research which in part stated “this bill lays the groundwork for a Soviet-style Federal Health Board that will put bureaucrats and politicians in charge of our nation’s health care system.” Sadly, it seems that Senator Coburn has his political hat on and not his white coat when he relies on Rush Limbaugh to “help” his patients.

This claptrap is really about the far right laying the ground work for a far greater and more sustained attack on the Democrats’ attempt to fix our health care system. As we move forward with the American people to finally fulfill the promise of Harry Truman, who over sixty years ago suggested that every American ought to have a reasonable health care plan, we will rely on the voters to remind the right wing that change is what we promised, and change is what we will deliver.

In these rough economic times, we have got to do better than the same old scare tactics and games for political gains. It’s time to fix our health care system and it’s time for common sense and honesty.

[Howard Dean, a physician, is the former Governor of Vermont and former chairman of the Democratic National Committee.]