Fleeting Glimpses by A. Traveler 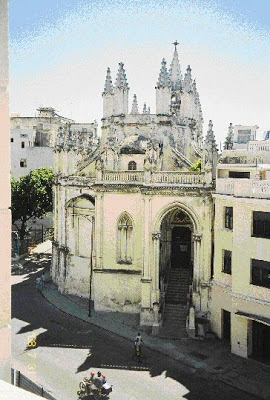 Catedral, Calle de la Reina.
Before the Golden Arches Invade the Pearl of the Caribbean…
by A. Traveler / The Rag Blog / August 21, 2008

Six days in one city isn’t enough to form opinions of a country that has fired one’s imagination for over 50 years; there are only fleeting impressions.

Almost everything in Ciudad Habana, from the light fixtures at the hotels, to the ceilings in the restaurants, to the intricate plaster moldings on practically every house and public building, would attract wild bidding in the Antique listings on eBay. Beautiful things abound, made by craftsmen long retired or deceased, carefully maintained and cared-for, yet used as casually as paper plates at a picnic. History is present on every corner, and the central city is a living museum. 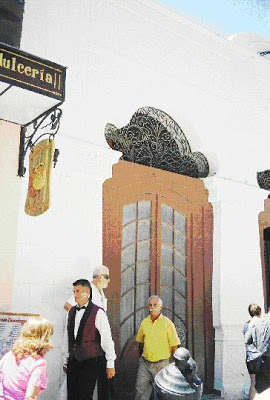 Ornate ironwork atop doorway, Obispo Street.
But not everything is old, and the new things are brilliant, Euro-inspired, yet harmonious additions to a bustling, active city. Everybody knows about the classic old cars – and they are sweet! – but the majority of vehicles on the roads are sleekly modern imports, including plenty of hybrids. Friendly neighbor Venezuela is providing the petrofuel. 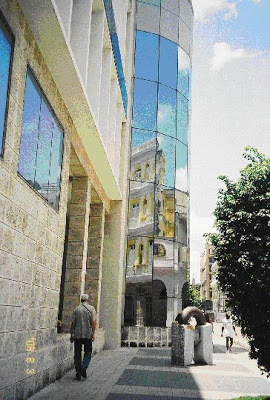 Glass wall of Museum of Cuban Art reflects renovated Victorian across the street, in baby pink and lemon yellow. 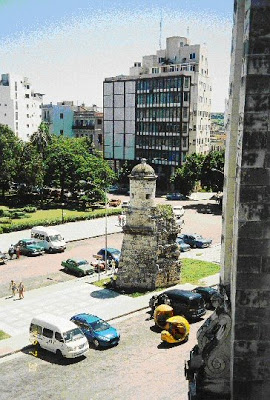 View from Museum of the Revolution shows disparate eras of transportation and construction. The small tower is part of a Spanish-era fortification.
While hero worship is alive and well in Cuba, there is much less seen of Fidel’s image and much more of Che, and of Camilo Cienfuegas, than one might expect. Little is seen anywhere of Raul Castro, who, unlike Venezuela’s Hugo Chavez, seems disinclined to re-enact Fidel’s marathon speeches. Anti-Bush propaganda around town focuses as much on Papa Bush as on Junior, but never becomes anti-American – unless you consider the fact that the US dollar trades as just over 80% of the Cuban peso as anti-American… People are friendly, outgoing, glad to see US visitors, and willing to go the extra mile to help you without expecting a gratuity – except for the ever-present mariachi and would-be mariachi, who surely deserve to be paid if they must play Guantanamera yet again!

As in so many “foreign countries”, the farther the well-behaved visitor strays from tourist areas, the less likely one is to be noticed at all. While the island’s Spanish is softer, and even faster, than the more familiar Mexican variety, it is still Spanish after all, and the good old reliable polite phrases will see you through most interactions. (Of course, many Cubans speak excellent English, should it inconvenience you too greatly to make an effort to flatter your hosts.)

All of today’s Cubans are, so they say, of Spanish and/or African descent, since indigenous peoples present when Signor Columbus arrived were “rapidly exterminated”. That this should have happened so rapidly as to preempt any later aspirations to native blood, such as many in the US claim from the Cherokee princess great-grandmother we all think we had, boggles the mind of descendants of later genocidal invaders of the hemisphere. 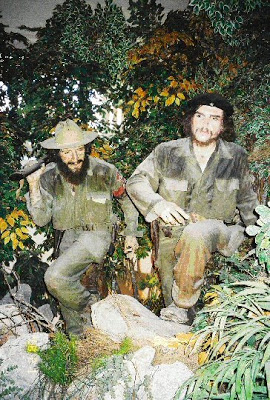 Camilo and Che in “natural history” Sierra setting at Museum of the Revolution. Cienfuegos was the only one of Fidel’s companions ever photographed dancing. 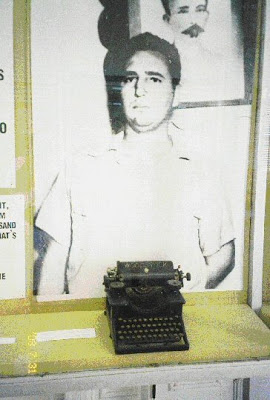 Fidel’s typewriter, also at the Museum of the Revolution: it’s a Woodstock! 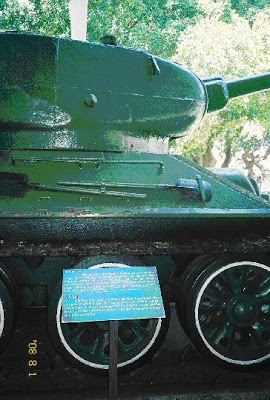 Outside the Granma boathouse. Fidel’s tank from the Bay of Pigs (above), and engine from a US spy plane which the US denied existed (below). 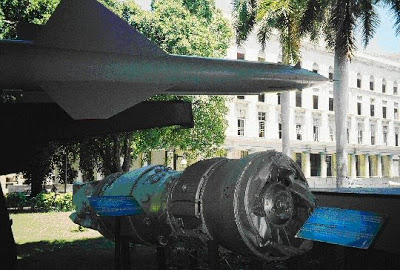 Everyone in Havana can get you Cohiba cigars “at a wonderful price”. (“Don’t be a sucker!”) The best rum, Canay, isn’t available in duty-free shops. One concludes rapidly that, no matter where he did it, Hemingway surely did drink! Even in sizzling August, the city hums with tourists from all over the world. Restaurant cuisine is bland and unimaginative – there’s not yet a Cordon Bleu school! – but not entirely pork, rice, and beans. Sometimes there is no chicken, but there are vegetables and fruits a’plenty, and good fish if you look for it. There aren’t many fat Cubans, but they generally look healthy, and there are lots of plump, well-outfitted babies. The shops have good-looking clothes and people are in there buying stuff. In six days, I saw only four outright beggars, three of them clearly professionals. 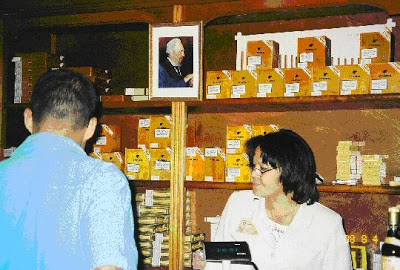 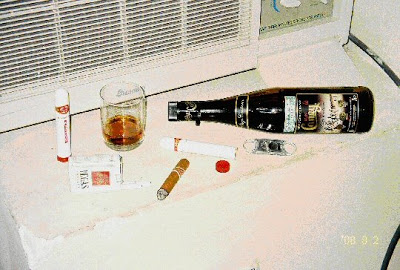 It was just a glimpse, but I’m glad to have seen this much of revolutionary Cuba before the remnants of the ineffectual US “blockade” fall and “progress” brings la isla its greatest challenges yet.

This entry was posted in Rag Bloggers and tagged Latin America, Travel. Bookmark the permalink.