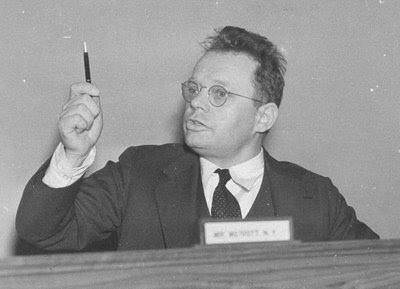 I just got a call from my brother, Maury Maverick, who said that if he hears that John McCain is a Maverick ONE MORE TIME, he is going to shoot the TV. Well, my brother doesn’t even own a gun, but I know exactly how he feels. Every time we hear that use of our name, it is like fingernails on a blackboard times ten.

We kicked around the idea of doing a web page but good old Monkey Cage has beat us to the punch:

John McCain is running this new ad (see video below) touting himself as the “original maverick.”

This led Jason Zengerle and Christopher Orr over at TNR’s The Plank to debate whether Tom Cruise or James Garner is the real original maverick.

In fact, the original maverick was Maury Maverick, the grandson of Samuel Maverick, from whom the name maverick first entered the American lexicon. Maury was a radical politician from San Antonio who served two terms in Congress (1935-1939). There, he led a bloc of progressive Democrats who sought to push Roosevelt and the New Deal to the left. The press quickly labeled this group “The Mavericks.” While hugely popular with the the many poor Hispanics in his district, Maverick was far too liberal for the conservative Texas Democratic establishment. In 1938 he lost the Democratic party primary after being slandered as a communist. Maverick then went on to serve as mayor of San Antonio before once again losing in the primary after being red-baited.

During World War II, he served in various defense agencies. It was at this time that he coined the term “gobbledygook,” saying that incomprehensible government bureaucratese sounded like turkey noise.

1944, Amer.Eng., first used by U.S. Rep. Maury Maverick, D.-Texas, (1895-1954), a grandson of the original maverick (q.v.) and chairman of U.S. Smaller War Plants Corporation during World War II. First used in a memo dated March 30, 1944, banning “gobbledygook language” and mock-threateaning, “anyone using the words activation or implementation will be shot.” Maverick said he made up the word in imitation of turkey noise.

This site has a nice description of Maverick’s congressional career along with links to the online version of his 1937 autobiography, A Maverick American.

4 Responses to Fontaine Maverick : John McCain is no Maverick!