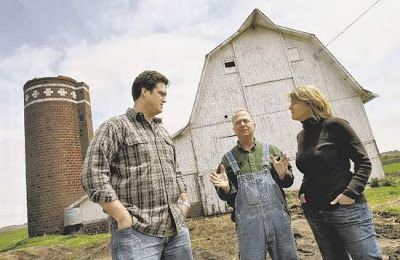 Iowan Dave Murphy quickly has become a national voice for the sustainable food movement since he petitioned the Obama transition team on appointments to the USDA.

Not a so-called “foodie,” the 40-year-old is a history buff with a master’s in creative writing from Columbia University in New York City. He was paying off student loans working as a consultant for the U.S. Department of Labor in 2006 when he returned home to Iowa to help his sister successfully fend off a Minnesota company’s attempt to build a hog confinement next to the family farm. He thought he would stay a few months.

Today, advocating for food democracy is the full-time job for the Clear Lake man, with the bulk of his time split between his nonprofit start-up, Food Democracy Now, and consulting businesses on sustainable practices.

His rapid ascent into food politics in the last three years is a product of being in the right place at the right time – a politically connected state as the food movement grows and a receptive ear lands in the White House – and having the savvy to make something of it.

“This was the perfect opportunity,” Murphy said.

Author and journalist Michael Pollan, whose book “The Omnivore’s Dilemma” is a favorite read among advocates of sustainable farming, said Murphy is emerging as a leader.

Pollan credited the petition by Murphy and allies with having an impact on USDA staffing choices.

“The fact that the petition originated in Iowa, and not New York City or Berkeley, Calif., made it all the more powerful,” Pollan said.

Shortly after Obama’s election, Murphy and other sustainable food advocates started Food Democracy Now, a nonprofit that pushes for farming practices that are socially, environmentally and economically responsible.

They launched an online petition in December and within months gathered nearly 100,000 signatures in support of 12 candidates for undersecretary appointments in the U.S. Department of Agriculture.

By February, they presented the first 10,000 signatures in person to newly appointed Agriculture Secretary and former Iowa Gov. Tom Vilsack.

The next day one of the group’s suggestions – Kathleen Merrigan – was appointed to a deputy secretary job. A second suggested name, Iowa native Doug O’Brien, was named Merrigan’s chief of staff.

He said the difference has been the Internet’s power to organize people and the growing number of mainstream Americans who are “eating on a continuum.”

People increasingly want food they can’t grow in their backyards or find in the grocery store, he said, so they shop farmers markets and buy directly from local farmers via “CSAs,” or community-supported agriculture.

While these farmers have a market for their food, Russell said, they have yet to find a voice in Washington, D.C., to match the political machine of industrial agriculture.

This is the role Murphy is trying to fill, and he comes armed with facts. For example, he pointed to a survey from the Organic Trade Association that showed that the U.S. sales of organic food grew nearly 16 percent between 2007 and 2008 to reach $22.9 billion. Organic foods now account for about 3.5 percent of all U.S. food sales.

For Murphy, sustainable farming is about more than the food.

He sees it as returning to a model of production that is better for the environment and one in which farmers can start without taking on deep debt to finance heavy equipment.

He said the agricultural policies today are stacked against farmers of small- to mid-sized farms in favor of larger operations.

Help all sizes of farms

Murphy stressed that he isn’t against large farm operations. He said sustainable practices can help farms of all sizes.

But Murphy does believe that the playing field ought to be leveled, for the benefit not just for smaller farms but for rural areas in general.

Author Pollan said the food movement and its leaders today are where the environmental movement was on the first Earth Day in 1970: still being introduced to the country.

“It hasn’t coalesced yet, and it isn’t clear which national group will take the lead, if any,” Pollan said. “It could be Dave’s.”