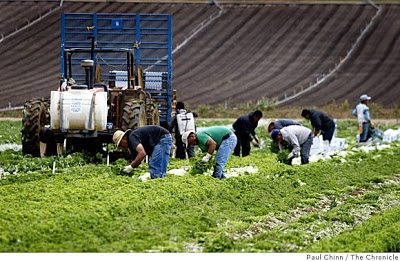 Washington — Dick Peixoto planted hedges of fennel and flowering cilantro around his organic vegetable fields in the Pajaro Valley near Watsonville to harbor beneficial insects, an alternative to pesticides.

He has since ripped out such plants in the name of food safety, because his big customers demand sterile buffers around his crops. No vegetation. No water. No wildlife of any kind.

In the verdant farmland surrounding Monterey Bay, a national marine sanctuary and one of the world’s biological jewels, scorched-earth strategies are being imposed on hundreds of thousands of acres in the quest for an antiseptic field of greens. And the scheme is about to go national.

Invisible to a public that sees only the headlines of the latest food-safety scare – spinach, peppers and now cookie dough – ponds are being poisoned and bulldozed. Vegetation harboring pollinators and filtering storm runoff is being cleared. Fences and poison baits line wildlife corridors. Birds, frogs, mice and deer – and anything that shelters them – are caught in a raging battle in the Salinas Valley against E. coli O157:H7, a lethal, food-borne bacteria.

In pending legislation and in proposed federal regulations, the push for food safety butts up against the movement toward biologically diverse farming methods, while evidence suggests that industrial agriculture may be the bigger culprit.

“Sanitizing American agriculture, aside from being impossible, is foolhardy,” said UC Berkeley food guru Michael Pollan, who most recently made his case for smaller-scale farming in the documentary film “Food, Inc.” “You have to think about what’s the logical end point of looking at food this way. It’s food grown indoors hydroponically.”

Scientists do not know how the killer E. coli pathogen, which dwells mainly in the guts of cattle, made its way to a spinach field near San Juan Bautista (San Benito County) in 2006, leaving four people dead, 35 with acute kidney failure and 103 hospitalized.

The deadly bug first appeared in hamburger meat in the early 1980s and migrated to certain kinds of produce, mainly lettuce and other leafy greens that are cut, mixed and bagged for the convenience of supermarket shoppers. Hundreds of thousands of the bug can fit on the head of a pin; as few as 10 can lodge in a salad and end in lifelong disability, including organ failure.

For many giant food retailers, the choice between a dead pond and a dead child is no choice at all. Industry has paid more than $100 million in court settlements and verdicts in spinach and lettuce lawsuits, a fraction of the lost sales involved.

A food safety bill sponsored by Rep. Henry Waxman, D-Los Angeles, passed this month in the House Energy and Commerce Committee. It would give new powers to the Food and Drug Administration to regulate all farms and produce in an attempt to fix the problem. The bill would require consideration of farm diversity and environmental rules, but would leave much to the FDA.

An Amish farmer in Ohio who uses horses to plow his fields could find himself caught in a net aimed 2,000 miles away at a feral pig in San Benito County. While he may pick, pack and sell his greens in one day because he does not refrigerate, the bagged lettuce trucked from Salinas with a 17-day shelf life may be considered safer.

The leafy-green agreement is based on available science, but it is just a jumping-off point.

Large produce buyers have compiled secret “super metrics” that go much further. Farmers must follow them if they expect to sell their crops. These can include vast bare-dirt buffers, elimination of wildlife, and strict rules on water sources. To enforce these rules, retail buyers have sent forth armies of food-safety auditors, many of them trained in indoor processing plants, to inspect fields.

“They’re used to working inside the factory walls,” said Ken Kimes, owner of New Natives farms in Aptos (Santa Cruz County) and a board member of the Community Alliance With Family Farmers, a California group. “If they’re not prepared for the farm landscape, it can come as quite a shock to them. Some of this stuff that they want, you just can’t actually do.”

Auditors have told Kimes that no children younger than 5 can be allowed on his farm for fear of diapers. He has been asked to issue identification badges to all visitors.

Not only do the rules conflict with organic and environmental standards; many are simply unscientific. Surprisingly little is known about how E. coli is transmitted from cow to table.

Scientists have created a vaccine to reduce E. coli in livestock, and a White House working group announced plans Tuesday to boost safety standards for eggs and meat. This month, the group is expected to issue draft guidelines for reducing E. coli contamination in leafy greens, tomatoes and melons.

Some science suggests that removing vegetation near field crops could make food less safe. Vegetation and wetlands are a landscape’s lungs and kidneys, filtering out not just fertilizers, sediments and pesticides, but also pathogens. UC Davis scientists found that vegetation buffers can remove as much as 98 percent of E. coli from surface water. UC Davis advisers warn that some rodents prefer cleared areas.

Produce buyers compete to demand the most draconian standards, said Jo Ann Baumgartner, head of the Wild Farm Alliance in Watsonville, so that they can sell their products as the “safest.”

State agencies responsible for California’s water, air and wildlife have been unable to find out from buyers what they are demanding.

They do know that trees have been bulldozed along the riparian corridors of the Salinas Valley, while poison-filled tubes targeting rodents dot lettuce fields. Dying rodents have led to deaths of owls and hawks that naturally control rodents.

“It’s all based on panic and fear, and the science is not there,” said Dr. Andy Gordus, an environmental scientist with the California Department of Fish and Game.

Preliminary results released in April from a two-year study by the state wildlife agency, UC Davis and the U.S. Department of Agriculture found that less than one-half of 1 percent of 866 wild animals tested positive for E. coli O157:H7 in Central California.

Frogs are unrelated to E. coli, but their remains in bags of mechanically harvested greens are unsightly, Gordus said, so “the industry has been using food safety as a premise to eliminate frogs.”

Farmers are told that ponds used to recycle irrigation water are unsafe. So they bulldoze the ponds and pump more groundwater, opening more of the aquifer to saltwater intrusion, said Jill Wilson, an environmental scientist at the Central Coast Regional Water Quality Control Board in San Luis Obispo.

“It’s been a problem for us trying to balance the organic growing methods with the food safety requirements,” Peixoto said. “At some point, we can’t really meet their criteria. We just tell them that’s all we can do, and we have to turn down that customer.”

Large retailers did not respond to requests for comment. Food trade groups in Washington suggested calling other trade groups, which didn’t comment.

Chiquita/Fresh Express, a large Salinas produce handler, told the advocacy group Food and Water Watch that the company has “developed extensive additional guidelines for the procurement of leafy greens and other produce, but we consider such guidelines to be our confidential and proprietary information.”

Seattle trial lawyer Bill Marler, who represented many of the plaintiffs in the 2006 E. coli outbreak in spinach, said, “If we want to have bagged spinach and lettuce available 24/7, 12 months of the year, it comes with costs.”

Still, he said, the industry rules won’t stop lawsuits or eliminate the risk of processed greens cut in fields, mingled in large baths, put in bags that must be chilled from packing plant to kitchen, and shipped thousands of miles away.

“In 16 years of handling nearly every major food-borne illness outbreak in America, I can tell you I’ve never had a case where it’s been linked to a farmers’ market,” Marler said.

“Could it happen? Absolutely. But the big problem has been the mass-produced product. What you’re seeing is this rub between trying to make it as clean as possible so they don’t poison anybody, but still not wanting to come to the reality that it may be the industrialized process that’s making it all so risky.”

June 2009: E. coli O157:H7 found in Nestle Toll House refrigerated cookie dough manufactured in Danville, Va., resulted in the recall of 3.6 million packages. Seventy-two people in 30 states were sickened. No traces found on equipment or workers; investigators are looking at flour and other ingredients.

October 2008: Salmonella found in peanut butter from a Peanut Corp. of America plant in Georgia. Nine people died, and an estimated 22,500 were sickened. Criminal negligence was alleged after the product tested positive and was shipped.

June 2008: Salmonella Saintpaul traced to serrano peppers grown in Mexico. More than 1,000 people were sickened in 41 states, with 203 reported hospitalizations and at least one death. Tomatoes were suspected, devastating growers.

This entry was posted in RagBlog and tagged Agriculture, Food Contamination, Organic Food. Bookmark the permalink.