Frank Bardacke : John Ross Had All the Right Enemies 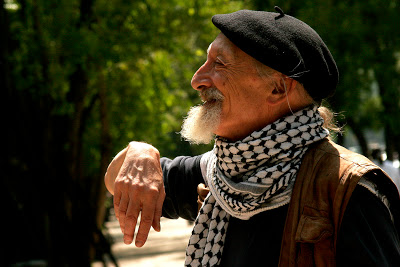 John’s gone. John Ross. I doubt that we will ever see anyone remotely like him again.

The bare bones, as he would say, are remarkable enough. Born to show business Communists in New York City in 1938, he had minded Billie Holliday’s dog, sold dope to Dizzy Gillespie, and vigiled at the hour of the Rosenberg execution, all before he was 16 years old. An aspiring beat poet, driven by D.H. Lawrence’s images of Mexico, he arrived at the Tarascan highlands of Michoacan at the age of 20, returning to the U.S. six years later in 1964, there to be thrown in the Federal Penitentiary at San Pedro, for refusing induction into the army.

Back on the streets of San Francisco 18 months later, he joined the Progressive Labor Movement, then a combination of old ex-CPers fleeing the debased party and young poets and artists looking for revolutionary action. For a few years he called the hip, crazy, Latino 24th and Mission his “bio-region,” as he ran from the San Francisco police and threw dead rats at slumlords during street rallies of the once powerful Mission Coalition.

When the not so ex-Stalinists drove him and others out of PL (“break the poets’ pencils” was the slogan of the purge) he moved up north to Arcata where he became an early defender of the forest and the self-described town clown and poet in residence. From there it was Tangier and the Maghreb, the Basque country, anti-nuke rallies in Ireland, and then back to San Francisco, where he finally found his calling as a journalist.

“Investigative poet” was the title he preferred, and in 1984, he was dispatched by Pacific News Service to Latin America, where he walked with the Sendero Luminoso, broke bread with the Tupac Amaru, and hung out with cadres of the M-19.

In 1985, after the earthquake, he moved into the Hotel Isabel in the Centro Historico of Mexico City, where for the next 25 years he wrote the very best accounts in English (no one is even a close second) of the tumultuous adventures of Mexican politics.

During the Mexican years, he managed to write nine books in English, a couple more in Spanish, and a batch of poetry chapbooks, all the while he was often on the road, taking a bus to the scene of a peasant rebellion or visiting San Francisco or becoming a human shield in Baghdad, or protecting a Palestinian olive harvest from marauding Israeli settlers.

He died Monday morning, January 17, a victim of liver cancer, at the age of 73, just where he wanted to, in the village of Tepizo, Michoacan, in the care of his dear friends, Kevin and Arminda.

That’s the outline of the story. Then there was John. Even in his seventies, a tall imposing figure with a narrow face, a scruffy goatee and mustache, a Che T-shirt covered by a Mexican vest, a Palestinian battle scarf thrown around his neck, bags of misery and compassion under his eyes, offset by his wonderful toothless smile and the cackling laugh that punctuated his comical riffs on the miserable state of the universe.

He was among the last of the beats, master of the poetic rant, committed to the exemplary public act, always on the side of the poor and defeated. His tormentors defined him. A sadistic prison dentist pulled six of his teeth. The San Francisco Tac Squad twice bludgeoned his head, ruining one eye and damaging the other. The guards of Mexico’s vain, poet-potentate Octavio Paz beat him to the ground in a Mexico City airport, and continued to kick him while he was down. Israeli settlers pummeled him with clubs until he bled, and wrecked his back forever. 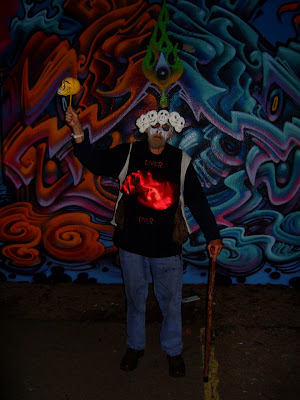 John Ross at Day of the Dead celebration. Photo from CounterPunch.
He had his prickly side. He hated pretense, pomposity, and unchecked power wherever he found it. Losing was important to him. Whatever is the dictionary opposite of an opportunist — that’s what John was. He never got along with an editor, and made it a matter of principle to bite the hand that fed him.

It got so bad, he left so few bridges unburnt, that in order to read his wonderful weekly dispatches in the pre-internet years, I had to subscribe to an obscure newsletter, a compilation of Latin American news, and then send more money to get the editors to send along John’s column.

He had his sweet side, too. He was intensely loyal to his friends, generous with all he had, proud of his children, grateful for Elizabeth’s support and collaboration, and wonderful, warm company at an evening meal. When my son, Ted, arrived in Mexico in 1990, John helped him get a job, find a place to live, introduced him around, and became his Sunday companion and confidant, as they huddled in front of John’s 11-inch TV watching the weekly broadcasts of NBA games.

He was a great, true sports fan, especially of basketball. One of the last times I saw him was at a friend’s house in San Francisco, in between radiation treatments, watching a Warriors game on a big screen TV, smoking what he still called the “killer weed.” Joe and I listened to him recount New York Knicks history, the origin of the jump shot, and Kareem’s last game, which somehow led to a long complaint about kidneys for sale in Mexico that had been harvested in China out of the still warm body of some poor, rural immigrant who had been legally executed for jaywalking in Beijing.

The very last time I had the pleasure of his company was at breakfast in Los Angeles when Ted and I saw him off on his last book tour, promoting El Monstruo, his loving history of Mexico City. He was in great form. His cancer was in remission — a “cancer resister,” he called himself — and he entertained us with a preview of his trip: long, tiresome Greyhound rides, uncomfortable couches, talks to tiny groups of the marginalized, the last defenders of lost causes without the money to buy his books. It would be a losing proposition, like so many of his others, all of which secure his place among the angels.

[Frank Bardacke taught at Watsonville Adult School, California’s Central Coast, for 25 years. His history of the United Farm Workers and Cesar Chavez, Trampled in the Vintage, is forthcoming from Verso. He can be reached at bardacke@sbcglobal.com. This article was written for and distributed by CounterPunch.]

1 Response to Frank Bardacke : John Ross Had All the Right Enemies