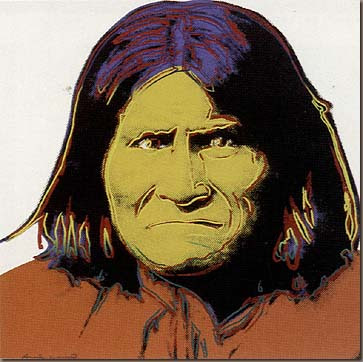 How would you feel if you knew that the skull of your great grandfather, stolen from his tomb, was being used in the secret ceremonies of a spoilt elite brat pack whose members have included some of the most powerful men in the world? A bit pissed off, right?

And if you also learned that the American President, George W Bush, his father George and his brother Jonathan, have taken part in these ceremonies, and, what’s more, in fact, that the President’s great grandfather, Prescott Bush, was one of those who had stolen the skull from its grave in the first place, it wouldn’t be surprising if you felt a little outraged.

Sounds unlikely? But this is precisely the situation which faces Harlyn Geronimo, great grandson of the iconic Native American Apache rebel leader, whose name he has inherited.

After the massacre of his wife and three children by Spanish troops in 1858, the original Geronimo, (real name Goyathlay, “One who Yawns”), took up arms against the Mexicans and Americans as they broadened their horizons on the continent, forcing the original inhabitants to be confined to arid, government-sanctioned ‘reservations’ where they could be taught to obey the rules of their new dollar bosses.

Geronimo was one of the last tribal leaders of Native Americans to remain defiant, rebellious and free until the colonization of the country by the whites was complete. After being captured by the American army with his 35 braves at Skeleton Canyon, Arizona in 1886, Geronimo was held as a prisoner of war at Fort Sill, Oklahoma, until his death in 1909, apart from the occasional outing to be exhibited at shows and pageants as a national attraction. He even rode in President Roosvelt’s 1905 inaugural parade. They paid him in dollars, of course.

Throughout his imprisonment , Geronimo never stopped asking to be allowed to return to his homeland in the Southwest, but his request was never granted. When he died, his body was buried in the Apache cemetery of Fort Sills.

There it lay until 9 years later when the grave was disturbed by members of a secret student society (including Prescott Bush) who were stationed at the fort on military duty at the time. The skull and thigh bones of Geronimo’s corpse were stolen and taken to a sombre stone windowless edifice in New Haven, Connecticut known as ‘the Tomb’, where Yale university’s elite student’s ‘order’ ‘Skull and Bones’, holds its secret meetings every week. On arched walls inside are carved slogans in German: “Wer war der Thor, wer Weiser, Bettler oder Kaiser? Ob Arm, ob Reich, im Tode gleich,” or, “Who was the fool, who the wise man, beggar or king? Whether poor or rich, all’s the same in death.” Nearly a hundred years after the robbery of his grave, the skull and bones of Geronimo remain captive in the Tomb of his enemies.

It wasn’t until Ned Anderson, former Chairman of the San Carlos Apaches of Arizona, started agitating in the eighties to have Geronimo’s remains returned to his native Arizona that he learned the true state of affairs. An anonymous letter from a Bones member sent him a photo of the skull and bones on show in a glass case inside the Tomb building at Yale, and the copy of an old Bones log book which recorded the robbery of the grave. Outraged, and describing the news as “a sacrilege and national disgrace”, Anderson asked the FBI to investigate. They said they would, if he turned over all his evidence to them, which he refused to do. In an attempt to retrieve the documentary evidence from Anderson, Bones member Jonathan Bush, brother of George W, met and offered him a skull which he claimed to be Geronimo’s as a swap. On examination the skull was identified as that of a ten year old child. Anderson, naturally, again refused to hand over the evidence. He asked senator John McCain to arrange a meeting with George Bush senior, but the request was refused.

In 1990 the Native American Graves Protection and Repatriation Act was signed into law. In accordance with this bill Yale’s Peabody Museum was forced to return certain artifacts it had held. Unfortunately the Act only applies to organizations that receive federal funding, and Yale’s secret societies are not directly affiliated to the University, exempting them from jurisdiction.

Still, members of Skull and Bones have violated laws preventing the desecration of graves and should be held responsible. If they continue to hold these remains they are participating in a continuing conspiracy to be in possession of stolen property.

In 2006 Harlyn Geronimo wrote to President Geoge W Bush to ask for his help in recovering the bones of his great grandfather so that they may be buried near his birthplace in the Gila Wilderness.

“Geronimo died as a prisoner of war, and he is still a prisoner of war because his remains were not returned to his homeland,” said Harlyn. “According to our traditions the remains, especially in this state when the grave was desecrated, need to be reburied with the proper rituals. With the higher learning of these individuals, I don’t know why they could resort to desecrating something that’s very sacred to Native American people.”

Two years later, the President has not responded.

Sign this Petition to Congress and demand the skull from the Bones!

[Michael Dickinson, whose artwork graces the covers of Dime’s Worth of Difference, Serpents in the Garden and Grand Theft Pentagon, lives in Istanbul. He can be contacted via his website, or at: michaelyabanji@gmail.com.

This entry was posted in RagBlog and tagged Bush, Native Americans, Spirituality. Bookmark the permalink.