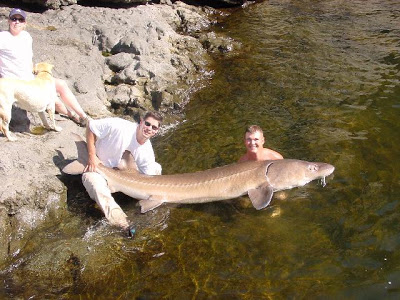 This is Mike’s sturgeon
Huge “sturgeon ball” in Columbia a mystery
By Michael Milstein / May 18, 2008

PORTLAND — When sonar surveys spotted a vast pile of rubble in the Columbia River below Bonneville Dam a few months ago, officials suddenly worried that part of the dam structure was eroding into the river.

“Everybody said, ‘Oh my gosh, we need to get divers out there right away,’ ” recalled Dennis Schwartz, a fisheries biologist with the Army Corps of Engineers, which oversees the dam.

What they found below the spillways in February was not a giant pile of rock at all, but a humongous pile of thousands upon thousands of sturgeon — some of them 14 feet long or longer — lounging together in frigid water at the bottom of the river.

“We call it the big sturgeon ball,” Schwartz said.

The mountain of white sturgeon contained around 60,000 fish, according to a rough estimate by Michael Parsley, a research fisheries biologist with the U.S. Geological Survey’s Columbia River Research Laboratory in Cook, Skamania County. He described that estimate as “probably conservative.”

It was an aquatic phenomenon nobody had ever seen at such a monstrous scale, offering a startling glimpse into the life of the Columbia’s largest and most ancient fish.

This entry was posted in RagBlog and tagged Ecology, Nature. Bookmark the permalink.