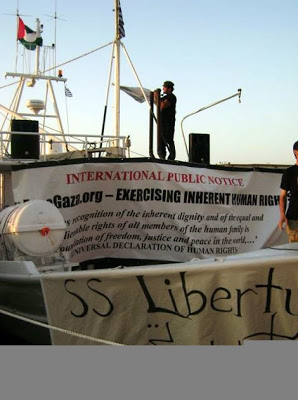 Gaza activists to return to Cyprus with Palestinian students
By Stefanos Evripidou / August 28, 2008

THE TWO ‘Free Gaza’ boats will set sail from Gaza today for Cyprus after successfully breaking the Israeli sea blockade of the Strip last Saturday.

Most of the 44 peace activists will return with the boats, while a number of international human rights workers will remain in Gaza to conduct human rights monitoring.

One Israeli activist, Jeff Halper, was detained by Israeli authorities after trying to return home to Jerusalem via the Erez land crossing between Israel and Gaza. Halper underwent questioning at the Sderot police station for entering the Gaza Strip in defiance of a military degree banning Israeli citizens from doing so.

The Israeli authorities decided to let the boats to enter the coastal enclave, the first to do so in years, because they wanted to avoid a public confrontation that could attract worldwide attention.

Israeli foreign ministry officials have claimed the boats were allowed to pass unhindered by the Israeli navy since they did not present a security threat.

The Free Gaza Movement which arranged the symbolic voyage to “end the siege of Gaza” argue that Israel has effectively lifted the blockade, imposed since 2007 when Hamas seized control of government from Palestinian President Mahmoud Abbas.

The activists maintain that if boats are inspected first by Cypriot authorities and given the all-clear, then there should be no reason why goods and people cannot move freely between Gaza and the rest of the world.

In an effort to cement this freedom, activists accompanied Gazan fishermen eight to nine miles out from the coast. The fishermen were previously prevented from fishing beyond four to six miles by the Israeli navy, according to activists in Gaza.

Today, in a further challenge to Israel’s tight grip over the Strip, the SS Liberty and SS Free Gaza will be carrying on board 12-14 Palestinians who were previously denied exit visas by Israel.

“Some of those leaving are students, with valid visas or dual citizenship, who have been accepted to universities abroad. Additionally, one Palestinian professor will finally be able to go back to teaching in Europe, and one young, Palestinian woman will finally be reunited with her husband,” said one of the organisers yesterday.

The organisers will have the boats inspected by the Gaza Port Authority and Cypriot authorities on arrival to ensure no interference on the part of the Israeli authorities when they leave Gaza.

“By Israel’s own admission, it has no authority to inspect the boats or the passengers when they leave Gaza,” said the organiser.

Dr. Vangelis Pissias, a Greek member of the Movement, said: “We do not accept that Israel can stop these boats. Palestinians have the same rights as all other peoples. Why is it that the only people in the Mediterranean without access to their own waters are the Palestinians?”

According to the Israeli newspaper, Haaretz, the Israeli authorities did not intend on stopping the boats leaving Gaza, but highlighted that this was not a blanket approval for all boats wanting to enter or leave Gaza.

This entry was posted in RagBlog and tagged Palestine, Palestinian Blockade, Peace Movement. Bookmark the permalink.