Free Gaza: Making a World We Want to Live In 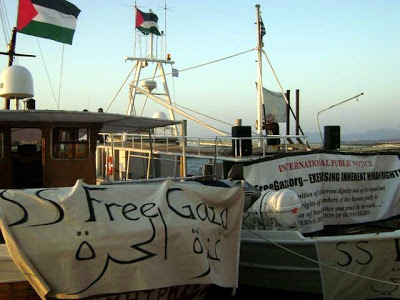 THE TWO boats set to challenge Israel’s tight control over the Gaza Strip are finally due to leave Cyprus this morning.

After days of waiting, the 40-plus international peace activists gathered their things and loaded the 21-metre SS Free Gaza and 18-metre SS Liberty docked at Larnaca port in preparation for today’s voyage.

Their hope is to reach Gaza’s shore uninterrupted by tomorrow and open a channel of communication for the 1.4 million Palestinians living there. Movement of goods and people has been strictly restricted by the Israeli authorities since Hamas took over government last year.

Human rights organisations say the situation is close to a “humanitarian catastrophe” with access to medical supplies limited, while day to day trade and aid remains bottlenecked at Gaza borders. The all-round restrictions leave even Fulbright scholars stranded in Gaza, unable to get back to their studies in the US.

Members of the Free Gaza Movement, including Palestinians and Israelis, are well aware that the chances of reaching Gaza are slim. Israel has insisted on its right to control everything that comes in and out of Gaza, including two boats carrying hearing aids for children affected by the sonic boom of Israeli planes and 5,000 balloons.

According to a Greek member of the group, Israel is claiming control over 36 nautical miles of water from Gaza’s shore, as opposed to the international standards of six or 12, because of military manoeuvres underway.

“Greek boats have been sailing these Mediterranean waters for three to four thousand years. How is it possible for Israel to act like the police and say who can enter the sea and who can’t… and then say it wants peaceful co-existence with the Mediterranean people,” said Vangelis Pisias.

Another Greek national, Petros Yiotis, said the mission was to reach Gaza and tell the world that “the Palestinians who are imprisoned in this huge open prison have the same human rights as people the world over. They have the right to use their sea freely, like the rest of the Mediterranean people”.

One of the main organisers, Paul Larudee, said the trip was not about humanitarian aid, but “about the right of Palestinians to live freely, as freely as Israelis, Cypriots, Greeks and Americans”.

“We can all use a little freedom but no one more than the Palestinians,” he added.

The mission’s medical officer, Dr Bill Dienst, said he was preparing for the worst and hoping for the best.

“I’m an emergency room physician from a small town, so I’m pretty good at what you call ‘wilderness medicine’,” said Dienst.

The doctor first went to Gaza in 1983. “There were no walls back then, it was easy to go back and forth. Palestinians were used as cheap labour back then. There was oppression but it wasn’t a lockdown like today.”

He last went two years ago. “Every time I go back I say, ‘this is horrible, things couldn’t get worse than this’ but they do.”

The captain of the SS Free Gaza, John Klusmire from California, only arrived on the island five days ago, just weeks after having surgery on a broken foot. Limping with his foot in a cast, the captain said there were many important reasons for getting to Gaza, even though he didn’t originally intend on going himself.

“They needed a captain, so I came. I only checked out the boat today, she’s a beauty,” he said.

THOMAS Nelson, a 64-year-old attorney from Oregon, says there are international and US lawyers ready to respond if the Israelis take the boats while in Gazan waters and arrest those on board.

“If they pull us in, there’s an argument for kidnapping. We’ve got both US and international lawyers, academics, theoreticians ready to get involved.

“When you are not violating international law and someone drags you against your will somewhere else, that’s kidnapping,” he said.

Nelson said there were two routes to take: one, against Israel itself in the International Court of Justice, or two, by looking at the personal liability of the Israeli navy commanders through a growing area of law called “universal jurisdiction”.

“The Israelis claim they have rights over Gazan territorial waters from the Oslo Accords, but they don’t. They only have the right to patrol the waters for security reasons, and it’s already been acknowledged we are not a security threat. That’s very clear,” said Nelson, one of the many retired or ready for retirement members of the group.

The Israeli Foreign Ministry has written to the organisers saying that if they insist on sailing to Gaza they will be seen as supporting a terrorist organisation.

“We have nothing to do with Hamas. We are going to a population that’s imprisoned. This is what states do, they try to scare people by telling them they’re helping terrorism. Like in the 1950s when everyone was seen as a communist threat,” said Nelson.

FOR HUWAIDA Arraf, a Palestinian with Israeli citizenship, the reasons for making the symbolic voyage to Gaza are much closer to home.

“As an Israeli citizen, I can’t go to Gaza to see friends, and they can’t come to see us,” she said.

“As a Palestinian, for too long Israel has tried to make us feel powerless. I’m part of a new generation of Palestinians who refuses to accept our predicament. We are trying to organise ourselves, to connect with each other despite the difficulties of being scattered all over the world with various travel restrictions.

“And as a human being, I’m appalled by what’s happening and horrified that governments, world leaders and institutions established to uphold people’s dignity and human rights are not doing anything about what Israel is doing to Palestine.”

Arraf said when governments and institutions fail to act, it’s up to the people to do so.

“We Palestinians have the power to mobilise, to make change. We deserve the freedom to live with dignity, and won’t rest until that happens.

“People of the world are not powerless to make a world they want to live in. Not one where people are punished, starved and humiliated because they are of a certain race, religion or ethnicity,” said Arraf.