Freedom of Choice : No Nanny State 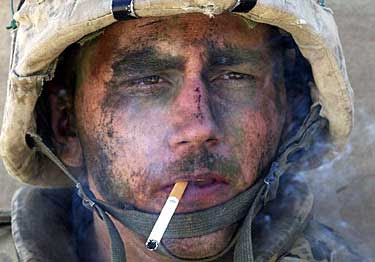 The Marlboro Man: The picture of Lance Cpl. James Blake Miller, now an Iraq War vet, raised a stink among anti-smoking activists when it appeared in scores of newspapers in 2004. Photo by Luis Sinco.

Anyone who has read very many of my posts knows that I hate conservatives who want to force everyone into accepting their own particular religious and political beliefs. But some may be surprised to learn that I hate the “nanny state” liberals equally as much.

To me, freedom means having the ability to make my own choices, and allowing everyone else to do the same. As long as my choices don’t hurt someone else, then no one should be able to force me to do something different. It does not matter whether those choices are “good” for me or not.

There are liberals who want to tell us what we can’t eat such as a ban on certain cooking oils or fatty foods. They want to tell me what I can’t drink such as carbonated soft drinks. And of course, they want to keep me from using tobacco products. These people don’t care that I’m an adult, perfectly capable of making my own choices. They have already decided what is best for me and will happily codify it with a law.

This is not freedom. It does not matter whether it’s the right trying to force religion on me or the left trying to force “healthiness” on me — it is tyranny either way, and I categorically reject it. Whatever happened to letting each citizen make his or her own choices?

In a free country, you have the right to try and convince me of anything you want — until I ask you to stop. Write articles, send mail, buy advertisements and try any other non-invasive measures to change my mind if you want. But you have stepped over the line when you try to force my compliance with a law or a ban, because then you are taking my freedom of choice away. And I will not willingly give up ANY freedom!

The latest freedom-grabbing measure is aimed at the very soldiers who are fighting for our country in a war zone. A “study” commissioned by the Pentagon and the Department of Veterans Affairs has decided that their own views of tobacco use should be forced on our military troops — the same troops who are supposedly fighting for our “freedom”.

They want to ban tobacco use on all military bases, and ban the sale of all tobacco products on military bases. They even want to extend this ban to military troops stationed in a war zone. Fortunately Secretary Gates has refused to do this. He cites as his excuse the high stress levels in a war zone. He should just say that soldiers who fight for freedom should have the freedom to make their own choices.

Frankly, this is a stupid thing for a country to do — especially when that country is having trouble filling its military enlistment quotas. They are telling all tobacco users that they don’t respect their freedom to choose, and really don’t want them to join the military.

How about you? Do you want the freedom to make your own choices, or are you happy to left those in power make your choices for you?

This entry was posted in Rag Bloggers and tagged Freedom of Choice, Liberalism. Bookmark the permalink.

6 Responses to Freedom of Choice : No Nanny State