Friendly Skies Dept : Want Some Torture With Your Peanuts? 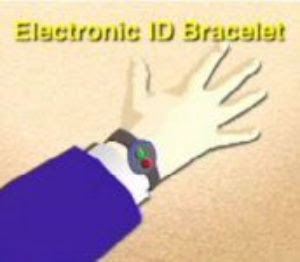 Just when you thought you’ve heard it all…

A senior government official with the U.S. Department of Homeland Security (DHS) has expressed great interest in a so-called safety bracelet that would serve as a stun device, similar to that of a police Taser®. According to the promotional video (view video below) found at the Lamperd Less Lethal, Inc. website, the bracelet would be worn by all airline passengers.

• Take the place of an airline boarding pass

• Contain personal information about the traveler

The Electronic ID Bracelet, as it’s referred to, would be worn by every traveler “until they disembark the flight at their destination.” Yes, you read that correctly. Every airline passenger would be tracked by a government-funded GPS, containing personal, private and confidential information, and would shock the customer worse than an electronic dog collar if the passenger got out of line.

Clearly the Electronic ID Bracelet is a euphemism for the EMD Safety Bracelet, or at least it has a nefarious hidden ability (thus the term ID Bracelet is ambiguous at best). EMD stands for Electro-Musclar Disruption. Again, according to the promotional video, the bracelet can completely immobilize the wearer for several minutes.

So is the government really that interested in this bracelet?

According to this letter from DHS official, Paul S. Ruwaldt of the Science and Technology Directorate, office of Research and Development, which was written to the inventor whom he had previously met with, Ruwaldt wrote, “To make it clear, we [the federal government] are interested in . . . the immobilizing security bracelet, and look forward to receiving a written proposal.”

The letterhead, in case you were wondering, is from a U.S. Department of Homeland Security office at the William J. Hughes Technical Center at the Atlantic City International Airport, or the Federal Aviation Administration headquarters.

In another part of the letter, Mr. Ruwaldt confirmed, “It is conceivable to envision a use to improve air security, on passenger planes.”

Would every paying airline passenger flying on a commercial airplane be mandated to wear one of these devices? I cringe at the thought. Not only could it be used as a physical restraining device, but also as a method of interrogation, according to the same aforementioned letter from Mr. Ruwaldt.

Would you let them put one of those on your wrist? Would you allow the airline employees, which would be mandated by the government, to place such a bracelet on any member of your family?

Why are tax dollars being spent on something like this?

Is this a police state or is this America?

This entry was posted in RagBlog and tagged Homeland Security, Security, Torture. Bookmark the permalink.