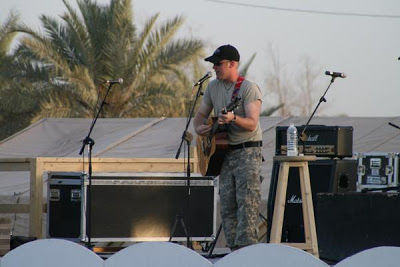 If I had deployed to Afghanistan, I don’t think I would have been able to look into another mirror again.

[Ft. Hood soldier and musician Sgt. Travis Bishop has refused deployment to Afghanistan. This is his story in his words.]

Why am I doing what I’m doing? Why am I resisting? Refusing? It wasn’t so long ago that I deployed to Iraq in support of the war on terror. I didn’t refuse then. Like a good Soldier, I did what I was told, and I spent 14 months stationed in Baghdad. It was a quiet enough deployment, I suppose. Mortars and rockets flew over the walls with unnerving frequency, but otherwise, it felt more like a move to a different duty station than a deployment to a warzone.

I didn’t see real combat. I didn’t come back with Post-Traumatic Stress Disorder. I didn’t lose friends. Mine was, in my opinion, an average deployment. Go overseas, play X-Box and read for a year, come back with money that’s gone before you remember how you spent it. We talked and laughed about it once we came back, and talked about what we would do with the money we made from our next deployment, whenever that may be.

Back home, I received a hero’s welcome. That was the first time I felt unsettled over what I had done overseas. My hand was shook, my back was patted, and every night my belly was burning, full of free alcohol. I was a veteran of a foreign war, hailed as a hero, and yet I felt…unnerved; anxious. I felt as if I had a big secret inside me that threatened to burst out of me at any moment, exposing what I really was to the rest of the world…but I couldn’t figure out what the secret was. Not for a long, long time.

I was never plagued with nightmares from the war. I was plagued with guilt. I literally felt guilty for receiving the accolades that come from redeploying as a “hero,” knowing that I had not paid the price for the Army’s true definition of a hero. Here it goes:

Army Hero; noun. Soldier who has deployed overseas to a combat zone. Has participated in active combat. Has redeployed with PTSD, a bullet in their leg, and a time bomb in their head. Unable to rejoin the civilian world in a normal psychological state.

In my heart of hearts, I know I don’t fit this definition, or anything resembling it.

For a long time, my unit was set to redeploy to Iraq in August 2009. However, in February 2009, we were told there was a change of plans. Instead of Iraq, it would be Afghanistan. Instead of August, it would be the end of March, less than sixty days away. Rumor had it that, although we were told the rush was because of a Brigade Commander’s wishes, it was our Battalion Commander who requested our unit be put on the Afghanistan Troop Surge.

Once again, in good Soldier mode, I prepared to deploy. This time I was a Sergeant, and I had Soldiers to take care of, one of which my best friend. These things drove me to be well prepared. We had things to do, and not much time to do them in. I rarely gave myself time to think about what it was we were actually deploying for. When I did, I started to question everything.

Why are we going? What purpose does it serve? Nothing sat right. I began to read the Bible again. More and more I saw things like “turn the other cheek” and “love thy enemy.” These were things that went directly against the war we were in, and they were spoken by Jesus himself. Could I really deploy again, and compromise my beliefs, just because I was told to? Would I be able to live with that? What if I had to take a life, and knew that if I hadn’t deployed, I would never have been put in that situation?

I became afraid to voice my opinion, knowing that if I spoke to the wrong person, I would face persecution and ridicule. I told my best friend, who voiced the same opinions to me, but it seemed he was content to deploy, do his time, make some money, and then get out of the Army upon his return. I respected his opinion, didn’t try to talk him out of it, and let it be.

The rest of the pre-deployment phase went uneventfully. We loaded our gear, got our trucks ready, and inspected our equipment. We went to the field several times, and although my team and other teams never fully accomplished the missions we were given, Command congratulated us on a successful field mission, and said we were more than ready to deploy. I started to worry again after that.

I worried when they said I was leaving early with the cargo. I worried again when our cargo flights were suddenly “cancelled,” and the main body of our unit deployed to Afghanistan before us, the “advanced” party. Once again, I got the feeling that we were rushing into something before we were even close to being ready. Weeks went by, and groups of us went out on separate days, sometimes only two Soldiers at a time.

A few days before I was set to deploy, I was approached by members of an organization who told me that I had a choice. They told me that they were here to support me, and that if I really was against the war our country was currently in, I could choose not to go. All those old feelings and worries came back with a vengeance, and I began to question the war again. After a full day of thinking, the only reason I had come up with for me to go was the fact that my best friend was going too. And, in the end, I decided that, although he might hate me for it, he was better off with me not going in the long run. I had to put my needs before his, though it killed me inside, because a three year friendship is hard to come by in the Army. I hope that he can forgive me one day.

So the afternoon I was set to deploy, while everyone else was loading their gear in the van headed toward the airfield, I loaded my gear in my car, and left. It was the hardest decision I have ever made.

I plan on coming back; soon. I am not a deserter, and I wouldn’t go AWOL for months and risk ruining my chances at getting a good job later in life. I am a Patriot. I love my country, but I believe that this particular war is unjust, unconstitutional and a total abuse of our nation’s power and influence. And so, in the next few days, I will be speaking with my lawyer, and taking actions that will more than likely result in my discharge from the military, and possible jail time… and I am prepared to live with that.

My father said, “Do only what you can live with, because every morning you have to look at your face in the mirror when you shave. Ten years from now, you’ll still be shaving the same face.”

If I had deployed to Afghanistan, I don’t think I would have been able to look into another mirror again.

[This story has also been posted to Ft. Hood Soldier Voices and to Facebook.]