Furor in Colombia : The Yanks are Still Coming 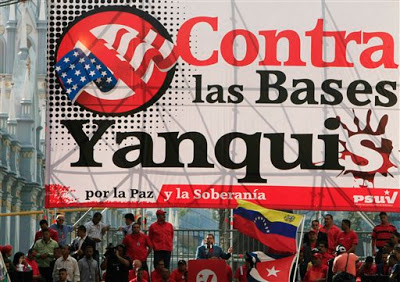 The U.S. Invasion of Colombia:
Touching all the bases

CARTEGENA DES INDIES, Colombia — The furor over a newly-signed agreement between the U.S. and Colombian governments continues, with denunciation of what was signed on Oct. 30 from all sides.

I must say “what was signed” because as of now it is being called many different things. There is a category four bullshit storm blowing across most of South America. “What it is” seems as much in doubt as “what is in it.” At various times it is described as a U.S. pact, an agreement, the pact, security pact, or as an addendum to an existing agreement; each description is then negated by a critic or a supporter and a substitute term inserted.

Last August, U.S. Secretary of State Hilary Clinton said, “The United States does not have and does not seek bases inside Colombia.” Maintaining that line this week, State Department spokesman Ian Kelly told reporters the agreement “doesn’t provide us with any kind of bases in Colombia. It provides us with an opportunity to cooperate with Colombia in some issues related to counternarcotics and interoperability in that regard.”

However, that doesn’t quite jibe with a U.S. Defense Department document that stated the U.S. military will not only have access to Colombian military bases, but also be able to use major international civilian airports. While we will attach to existing bases, we will build our own sections. This is already started with a $46 million dollar expansion of a runway at Palanquero Air Base in Puerto Salgar, Cundinamarca. June 15th the U.S. State Department authorized a contract worth almost a half million dollars to expand warehouses at Tolemaida.

According to reported provisions, U.S. military personnel and defense contractors will also enjoy diplomatic immunity in Colombia. But President Alvaro Uribe’s conservative government says there will be “no impunity” for any crimes committed by the U.S. military, insisting the agreement commits Washington to investigate and punish such cases. “The agreement includes such important things [as]… no U.S. jurisdiction or courts martial in Colombia, or that Colombia may participate in investigations conducted against American officials,” added Colombian Foreign Minister Jaime Bermudez.

U.S. Ambassador to Colombia William Brownfield, one of the signatories, said the pact “updates” and “modernizes” agreements already in place between the two countries, signed in 1952, 1962, and 1974. The new 10-year deal allows the U.S. military to use seven bases in strategically located Colombia, which shares borders with Venezuela, Ecuador, Brazil, Peru, and Panama, and boasts both Pacific and Caribbean-Atlantic ports.

The agreement caused early concern not only among neighboring countries, but among inhabitants of Colombia, because its details were not known, nor was the Colombian Congress consulted. An August meeting of concerned South American countries called the previous U.S.-Colombia agreement “extra-regional interference” and an act of imperialism. The Colombian government refused to give details of the agreement because it was not signed yet and because it was “a reserved matter according its sovereignty.”

After the signing, Bermudez said the exact text of the agreement would be announced in one week, in a letter to foreign ministers of the nations concerned. Well, that was last week’s news; it didn’t happen. Now Bermudez promises to release it to the countries “involved,” this week.

As of November 9, 2009, four Colombian bases had been confirmed as part of the new deal. They are:

Three bases yet to be confirmed but strongly suspected by this writer to be included are:

The U.S. and Uribe both say the agreement will help Colombia deal more effectively with drug gangs and left wing rebel groups. One problem with that is that Hugo Chavez’ neighboring Venezuela and the Revolutionary Armed Forces of Colombia (FARC) are characterized (FARC by the U.S. government; the Venezuelan government in Congress; and both, routinely, by Uribe’s government) as both terrorists and drug dealers.

The FARC has responded to the newly-inked agreement. In a communiqué to Colombian military of honor and the people in general, FARC urges them to defend Colombia’s sovereignty and Latin American dignity, both “deeply tarnished with disgrace, blood, corruption and servility by President Alvaro Uribe.”

The group says that, without even blushing, since he lacks any dignity, Uribe accepted the installation by the Empire of seven military bases in Colombia in an act of high treason, “a poisoned dagger plunged into the body of the Latin American Homeland, with its tip hurting the very heart of [the continent].”

The guerrillas add that the only objective of the agreement is to thwart the democratic, pro-integration process of the peoples who, led by the Bolivarian Alliance of the Peoples of Our Americas (ALBA), have continued the unfinished liberation project started by Simon Bolivar, South America’s Liberator.

1 Response to Furor in Colombia : The Yanks are Still Coming