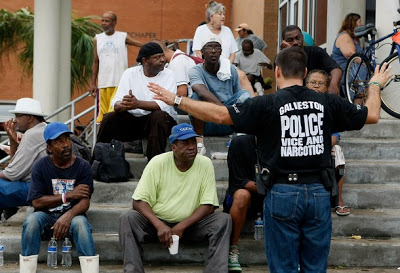 A Galveston vice officer talks to Hurricane Ike evacuees in September 2008. It would appear that they’re not always so helpful.
‘As Dymond headed toward the breaker, a blue van drove up and three men jumped out rushing toward her. One of them grabbed her saying, “You’re a prostitute. You’re coming with me.”‘
By Chris Vogel / December 18, 2008

It was a little before eight at night when the breaker went out at Emily Milburn’s home in Galveston. She was busy preparing her children for school the next day, so she asked her 12-year-old daughter, Dymond, to pop outside and turn the switch back on.

As Dymond headed toward the breaker, a blue van drove up and three men jumped out rushing toward her. One of them grabbed her saying, “You’re a prostitute. You’re coming with me.”

Dymond grabbed onto a tree and started screaming, “Daddy, Daddy, Daddy.” One of the men covered her mouth. Two of the men beat her about the face and throat.

As it turned out, the three men were plain-clothed Galveston police officers who had been called to the area regarding three white prostitutes soliciting a white man and a black drug dealer.

All this is according to a lawsuit filed in Galveston federal court by Milburn against the officers. The lawsuit alleges that the officers thought Dymond, an African-American, was a hooker due to the “tight shorts” she was wearing, despite not fitting the racial description of any of the female suspects. The police went to the wrong house, two blocks away from the area of the reported illegal activity, Milburn’s attorney, Anthony Griffin, tells the Houston Press’ Hair Balls.

After the incident, Dymond was hospitalized and suffered black eyes as well as throat and ear drum injuries.

Three weeks later, according to the lawsuit, police went to Dymond’s school, where she was an honor student, and arrested her for assaulting a public servant. Griffin says the allegations stem from when Dymond fought back against the three men who were trying to take her from her home. The case went to trial, but the judge declared it a mistrial on the first day, says Griffin. The new trial is set for February.

“I think we’ll be okay,” says Griffin. “I don’t think a jury will find a 12-year-old girl guilty who’s just sitting outside her house. Any 12-year-old attacked by three men and told that she’s a prostitute is going to scream and yell for Daddy and hit back and do whatever she can. She’s scared to death.”

Since the incident more than two years ago, Dymond regularly suffers nightmares in which police officers are raping and beating her and cutting off her fingers, according to the lawsuit.

Griffin says he expects to enter mediation with the officers in early 2009 to resolve the lawsuit.

The following comes from William Helfand, lawyer for the officers:

Both the daughter and the father were arrested for assaulting a peace officer. “The father basically attacked police officers as they were trying to take the daughter into custody after she ran off.”

Also, “The city has investigated the matter and found that the conduct of the police officers was appropriate under the circumstances,” Helfand says. “It’s unfortunate that sometimes police officers have to use force against people who are using force against them. And the evidence will show that both these folks violated the law and forcefully resisted arrest.”