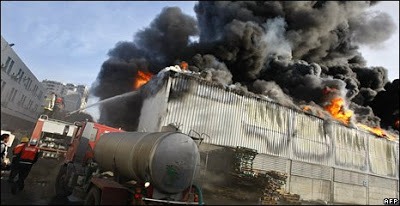 John Ging, head of the UN aid agency in Gaza, said that “three rounds that emitted phosphorus” hit a corner of the UN’s Gaza City facility on, above, on Jan. 15, 2009.

White phosphorus sticks to human skin and will burn right through to the bone, causing death or leaving survivors with painful wounds which are slow to heal. — BBC News.

See ‘US Sold Phosphorus Shells to Israel,’ by Jason Ditz, Below.

GAZA – Palestinian doctors at a number of hospitals in the Gaza Strip informed foreign medical experts allowed into the area over the past two weeks that they were witnessing an unexpected deterioration in the condition of their burn victims.

They described the same phenomenon: Two weeks after being injured, the burn victims seemed to be getting worse, requiring skin grafts abroad.

In other instances, internal tissue was also destroyed. Some of the wounded died a week to 10 days after being injured, even though they had not appeared to suffer extensive injuries. The doctors only later discovered that their liver and kidneys had been affected. But at this point, it was already too late to save many of the wounded.

The precise number of those who suffered burn wounds and then died is still uncertain.

Doctors take care to note that until the necessary laboratory work is done, they will be unable to determine with certainty if the burns were caused by the white phosphorus bombs the IDF dropped during its ground offensive in the Gaza Strip.

They are also unable to state with certainty whether the patients’ deterioration and the spread of infection stemmed directly from being hit with the phosphorus mortars.

However researchers from Amnesty International and Human Rights Watch, who have spent the past three weeks in the Gaza Strip, have concluded with certainty that the white phosphorus bombs struck residential neighborhoods.

The initial treatment of the burns, before the doctors in the Gaza Strip had realized that they were caused by white phosphorus, was deemed useless.

“We had never seen phosphorus burns before,” a veteran foreign surgeon told Haaretz. “In the [medical] literature, what is known about these burns is what was done as experiments, in lab conditions, or in military bases, perhaps as the result of accidents.”

However, three Israeli documents Haaretz received, which were written during Operation Lead Cast, describe the sort of burns caused by white phosphorus and match the descriptions of the medical personnel in the Gaza Strip. The documents were prepared by the office of the IDF chief medical officer, the Medical Field Operations HQ and Magen David Adom.

Another document, this one signed by Dr. Gil Hirschorn, who is also a colonel in the army and head of trauma in the office of the IDF’s chief medical officer, states: “During Operation Cast Lead, intelligence was received that Hamas was making use of an ordinance that contains phosphorus. Phosphorus is a poisonous substance, white-yellowish, similar to wax, that is used in mortar shells and hand grenades.

“When the phosphorus comes in contact with living tissue it causes its damage by ‘eating’ away at it. Characteristics of a phosphorus wound are: chemical burns accompanied by extreme pain, damage to tissue … the phosphorus may seep into the body and damage internal organs. In the long run, kidney failure and the spread of infection are characteristic … In conclusion: a wound by an ordinance containing explosive phosphorus is inherently dangerous and has the potential to cause serious damage to tissue.”

A document entitled “Exposure to White Phosphorus,” prepared by Medical Field Operations HQ and sent from the Health Ministry notes that “most of the data on phosphorus wounds stems from animal testing and accidents. Exposure to white phosphorus is highly poisonous, according to many lab experiments. Burns covering a small area of the body, 12-15 percent in lab animals and less than 10 percent in humans, may be lethal as a result of its effects, mostly on the liver, heart and kidneys.”

Haaretz visited a number of homes in the Gaza Strip that show clear signs of being hit by phosphorus shells. At least one of the children hurt in such an attack will require a skin graft abroad. In another instance, four children and the father died as a result of a white phosphorus bombing.

US Sold Phosphorus Shells to Israel
By Jason Ditz / February 5, 2009

The Pine Bluff Arsenal, a United States Army installation in Arkansas, specializes in chemical and biological weapons. The military touts them as the only facility in the Northern Hemisphere which fills white phosphorus munitions. That’s the important point here, as it once again ties the US military directly into the Israeli war in the Gaza Strip, and one of its most unseemly practices.

The use of white phosphorus is not in and of itself a war crime, and is generally considered acceptable as a means of obscuring troop movements or illuminating areas. Its use in civilian areas however, even if not directed at the civilian population, is banned under the Geneva Convention on Certain Conventional Weapons. Preliminary investigations show indisputable evidence that Israel used white phosphorus in some of the most densely populated portions of Gaza, and still burning fragments were found after the war ended wedged into civilian buildings.

The Israeli military officially denied using such munitions during the war, though they eventually conceded to it. Their official story now is that the use was not illegal and that Hamas was the one committing war crimes by provoking such attacks. The treaty prohibits the use of such weapons against military targets in civilian regions however, and makes no exception allowing the nation violating it to transfer blame to others in case they really wanted to hit those targets.