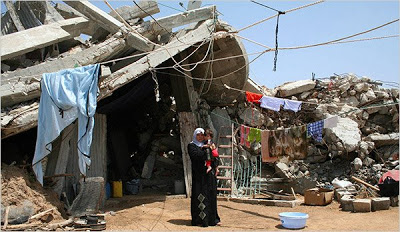 Four months after Israel’s war against Hamas in Gaza, Suad Khadir and her family are still living in a tent. To escape the heat, they often seek refuge under the rubble. Photo: Ashraf Amra/New York Times.
Misery Hangs Over Gaza Despite Pledges of Help
By Ethan Bronner / May 28, 2009

GAZA — Dozens of families still live in tents amid collapsed buildings and rusting pipes. With construction materials barred, a few are building mud-brick homes. Everything but food and medicine has to be smuggled through desert tunnels from Egypt. Among the items that people seek is an addictive pain reliever used to fight depression.

Four months after Israel waged a war here to stop Hamas rocket fire and two years after Hamas took full control of this coastal strip, Gaza is like an island adrift. Squeezed from without by an Israeli and Egyptian boycott and from within by their Islamist rulers, the 1.5 million people here are cut off from any productivity or hope.

“Right after the war, everybody came — journalists, foreign governments and charities promising to help,” said Hashem Dardona, 47, who is unemployed. “Now, nobody comes.”

But with the Obama administration pressing Israel to allow in reconstruction materials, and with attention increasingly focused on internal Palestinian divisions, Gaza will soon be back at the center of Middle East peace negotiations. The Palestinian president, Mahmoud Abbas, met with President Obama on Thursday in Washington.

For many Israelis, Gaza is a symbol of all that is wrong with Palestinian sovereignty, which they view increasingly as an opportunity for anti-Israeli forces, notably Iran, to get within rocket range. 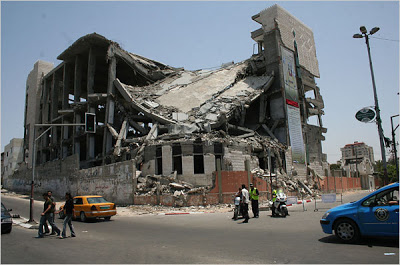 The ruins of the parliament building in Gaza City, which was destroyed by Israel during the war four months ago. Photo: Ashraf Amra/New York Times.

That leaves Gaza suspended in a state of misery that defies easy categorization. It is, of course, crowded and poor, but it is better off than nearly all of Africa as well as parts of Asia. There is no acute malnutrition, and infant mortality rates compare with those in Egypt and Jordan, according to Mahmoud Daher of the World Health Organization here.

This is because although Israel and Egypt have shut the borders for the past three years in an effort to squeeze Hamas, Israel rations aid daily, allowing in about 100 trucks of food and medicine. Military officers in Tel Aviv count the calories to avoid a disaster. And the United Nations agency for Palestinian refugees runs schools and medical clinics that are clean and efficient.

But there are many levels of deprivation short of catastrophe, and Gaza inhabits most of them. It has almost nothing of a functioning economy apart from basic commerce and farming. Education has declined terribly; medical care is declining.

There are tens of thousands of educated and ambitious people here, teachers, engineers, translators, business managers, who have nothing to do but grow frustrated. They cannot practice their professions and they cannot leave. They collect welfare and smoke in cafes. A United Nations survey shows a spike in domestic violence.

Some people say they have started to take a small capsule known as Tramal, the commercial name for an opiate-like painkiller that increases sexual desire and a sense of control. Hamas has recently warned of imprisonment for those who traffic in and take the drug.

Yet the pills arrive, along with clothing, furniture and cigarettes, through the hundreds of tunnels punched into the desert at the southern border town of Rafah by rough-edged entrepreneurs who pay the Hamas authorities a tax on the goods. 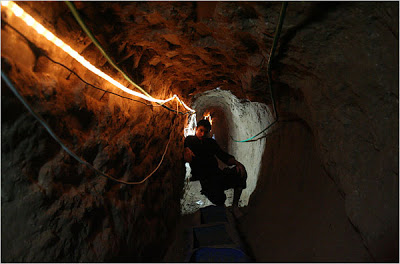 A smuggler digging a tunnel at the border of Egypt and the Gaza Strip. Everything but food and medicine has to be smuggled in. Photo: Ashraf Amra for The New York Times.

Similar tunnels also serve as conduits for arms. Israel periodically bombs those in hopes of weakening Hamas, which says it will never recognize Israel and will reserve the right to use violence against it until it leaves all the land it won in the 1967 war. After that, there would be a 10-year truce while the next steps were contemplated, although the Hamas charter calls for the destruction of Israel in any borders.

Israel began the siege after Hamas won Palestinian legislative elections in 2006. It was tightened after Hamas pushed the Palestinian Authority out of Gaza in June 2007. Iranian backing for Hamas has added to Israel’s conviction that the siege is the right path.

The aim is to keep Gaza at subsistence and offer a contrast with the West Bank, which in theory benefits from foreign aid and economic and political development. Hamas supporters will then realize their mistake. The plan has not gone well, however, partly because the West Bank under Israeli occupation remains no one’s idea of paradise and partly because Hamas seems more in control here every year, with cleaner streets and lower crime, although its popularity is hard to gauge.

“Hamas is learning from its mistakes and getting stronger and stronger,” said Sharhabeel al-Zaeem, a prominent lawyer here. He and others have been urging international officials to get construction materials and other goods into Gaza through the closed crossings.

They argue that the current system serves only Hamas, since it taxes the illicit tunnel goods and limited currency exchanges and is not blamed by the people for the outside siege. If glass and cement were allowed in through the crossings with Israel, they say, Hamas would not get the credit and the Palestinian Authority could collect the taxes.

“The people of Gaza are depressed, and depressed people turn to myth and fantasy, meaning religion and drugs,” said Jawdat Khoudary, a building contractor. “This kind of a prison feeds extremism. Let people see out to see a different version of reality.”

Israeli officials remain skeptical of opening the borders. Many believe that their war served as deterrence and note the drastic reduction in rocket fire as evidence. They fear that steel or cement will be siphoned off by Hamas for arms. But they are feeling pressure from the Americans and United Nations, and they are discussing a pilot project.

Meanwhile, Gaza feels more and more like a Hamas state and less linked to the West Bank. Men are increasingly bearded, women are more covered. Hamas is the main employer. Schools and courts, once run by the Fatah-dominated Palestinian Authority, are all Hamas. The government is collecting information on companies and nonprofit groups and seeking control over them.

Many here are especially worried about the young. At a program aimed at helping those traumatized by the January war, teenagers are offered colored markers to draw anything they like, says Farah Abu Qasem, 20, a student of English translation who volunteers at the program.

“They seem only to choose black and to draw things like tanks,” she said. “And when we ask them to draw something that represents the future, they leave the paper blank.”