George McGovern : Get Out of Iraq. Now. 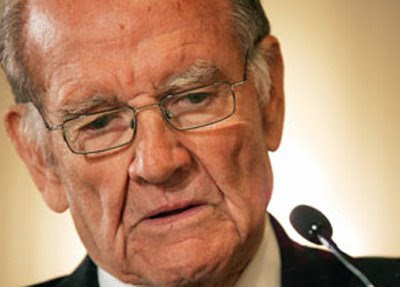 Are we now going to ignore for another three years the public mandate of 2006 against this costly, preemptive war based on deceit? And how can we justify putting thousands more U.S. troops into Afghanistan?

President Obama holds my admiration with high hopes for his message of change in Washington. It is puzzling, however, that he has adopted most of the previous administration’s formula for dragging out the withdrawal of our troops from the mistaken war in Iraq for nearly three more years. Very little “change” here.

Three years ago, public opinion polls indicated that a majority of Americans believed our policymakers were wrong in ordering troops into Iraq. It is widely accepted that this sentiment more than any other factor in the 2006 congressional elections resulted in Democratic majorities in both the House and Senate.

Are we now going to ignore for another three years the public mandate of 2006 against this costly, preemptive war based on deceit? And how can we justify putting thousands more U.S. troops into Afghanistan? We have already exhausted our treasury. We are also close to exhausting our soldiers.

Can there be any doubt that the enormous war cost has contributed to the financial crisis here at home? The expense of waging two Middle East wars, plus the loss of revenue caused by the previous administration’s tax cuts, have skyrocketed the national debt to a record high. Do we ever consider what the interest alone is on our $10-trillion national debt — much of it paid to China?

Frankly, we cannot afford a two-war commitment year after year if we want to balance the federal budget and restore our economy. The huge bonuses that directors of failing corporations have awarded themselves and their chief executives have rightfully angered people, but those figures are peanuts compared with the $12 billion a month we have poured into Iraq and Afghanistan over the last six years.

Has either the great God above or his creatures here below designated us to run the Middle East? What do we say to the Iraqi people who have indicated overwhelmingly in several polls that they want U.S. troops out of their country now? Why would we not understand this sentiment considering that our military equipment has smashed Iraqi homes, public buildings and infrastructure, including electricity and running water?

Of course, the most painful cost of these wars is the deaths of more than 4,200 brave American troops and tens of thousands of Iraqi civilians. This is to say nothing of the decline of our political judgment and moral standing in the world.

The Obama administration recommends we leave 50,000 troops in Iraq to “police” that troubled country through 2011. There may well be flare-ups that will keep them there indefinitely, struggling to police the war-induced chaos.

In June 1950, President Truman ordered our troops into Korea, stating it would only be a brief police action that did not require a declaration of war. Three years later and after 38,000 American soldiers had been killed, the new American president, Dwight D. Eisenhower, the commander of Allied forces in World War II, promptly ended our involvement in the Korean War, to the relief of our combat soldiers and the American public.

Unfortunately, Washington left 40,000 American soldiers behind to police the 38th Parallel — for a brief time. Yet, more than 50 years later, nearly 30,000 American troops are still in South Korea. So much for brief police actions.

Our policymakers in Washington contend that we must maintain U.S. troops in the Middle East to curb terrorism. I strongly believe that it is our military presence in Iraq, Afghanistan and elsewhere in the Middle East that is driving terrorism against the United States. No country that longs for national sovereignty wants a foreign army in its midst. We taught that lesson to the British Empire in 1776 when George Washington and his ragtag guerrilla army drove the British military from our shores.

My generation has lived through half a dozen wars, beginning with World War II and then Korea, Vietnam, Iraq and several smaller conflicts. The only one of those wars I really believed in and still do was the U.S. participation in World War II, in which I served as a combat bomber pilot against Hitler’s Nazi Germany.

I believe we aging veterans have an obligation to share what we have learned with the American people and with our young president, who seems open to well-meant suggestions.

In that spirit, I urge President Obama to bring our troops home from the Middle East this year. A good target date for completing an orderly withdrawal from two ill-conceived and costly wars in Iraq and Afghanistan would be Thanksgiving 2009.

For our sake and God’s sake, let’s get out of there and begin healing our own bankrupted land.

[George S. McGovern, a former U.S. senator from South Dakota, was the Democratic nominee for president in 1972.]