Gilding the Lilly : The Lies of Cindy McCain 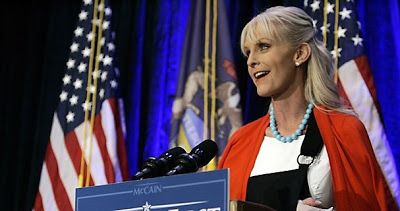 On the stump: Cindy McCain speaks to reporters in Birmingham, Mich. Her arm was sprained when an enthusiastic supporter vigorously shook her hand. Photo by Mary Altaffer / AP.
Mother Teresa told me to do it…
By Alexandra Marks / August 20, 2008

Gilding the lily is nothing new to politics. From the 1840s when William Henry Harrison claimed to have been born in a log cabin (it was actually a Virginia plantation) to Ronald Reagan’s reminiscing about flying over Germany in World War II (he did, but only in a movie), politicians have taken perfectly good stories and embellished them.

This campaign is no exception. During the primaries, Hillary Rodham Clinton had to back away from claims she “ducked sniper fire” in Bosnia in 1996. Mitt Romney found himself having to explain how he “saw my father march with Martin Luther King,” when it turned out his father never marched with the Rev. Mr. King.

The latest embellishments come from the McCain camp. Cindy McCain has repeatedly referred to herself as an “only child.” This week came news that she actually has two half sisters, although apparently she had very little contact with them.

The McCain campaign had also put out the story that Mother Teresa “convinced” Cindy to bring home two orphans from Bangladesh in 1991.

Mrs. McCain, it turns out, never met Mother Teresa on that trip. (Once contacted by the Monitor, the campaign revised the story on its website.)

Such exaggerations may simply be the product of a faulty memory or a desire to be “better” than one is in a political culture that requires larger-than-life idols. But with the advent of the fact-checking obsessed blogosphere – and a media racing to keep up – such self-aggrandizement doesn’t last as long as it once did.

“It’s all about myth-making,” says Darrell West, the director of governance studies at the Brookings Institution in Washington. “Politicians love to turn their stories into great epics, and sometimes they have to embellish to smooth out the story line.”

“But now there are too many professional and amateur fact-checkers,” he says. “And there are hundreds if not thousands of bloggers who have detailed knowledge on specialized information, so you really can’t get away with stretching the truth anymore.”

The story about Mother Teresa “convincing” Mrs. McCain to bring home two children from an orphanage in Bangladesh has been retold many times. Initially, the “About Cindy McCain” page on the McCain campaign website read: “Mother Teresa convinced Cindy to take two babies in need of medical attention to the United States. One of those babies is now their adopted daughter, 16-year-old Bridget McCain.”

The media picked up the theme. A story earlier this year on ABC’s “Good Morning America” stated, “With Mother Teresa’s encouragement she brought her fourth child, Bridget, home.” An April 2008 Wall Street Journal profile states that Mother Teresa “implored” Cindy to bring the girls to the United States. Other articles say Cindy did it “at the behest” of Mother Teresa.

But a source who was with McCain on that 1991 trip, and who asked that his name not be used because of prior legal dealings with the McCain family, says that Mother Teresa was not at the orphanage when Cindy decided to bring the two girls home.

A 1991 article in the Arizona Star at the time of the adoption only mentions that the children were from an orphanage that was started by Mother Teresa. It does not mention a meeting with Mother Teresa or her asking McCain to bring the girls to the US.

According to biographies of Mother Teresa, in 1991 she was in Mexico where she developed medical problems. From there, she went to a hospital in La Jolla, Calif.

A McCain source acknowledged that Cindy McCain did not meet Mother Teresa during the 1991 trip to Bangladesh but said McCain did meet her later on, although the source could not say when or where. The campaign has since reworded the reference to the adoption on its website.

In another instance, McCain told the Chicago Tribune earlier this year that on one of her medical missions to Vietnam she was in “the very hospital – and in the very room – where her husband was brought after being shot down and then beaten by a mob during the war.”

A 1992 Washington Times story recounts a different version: “Mrs. McCain asked to see the operating room and her husband’s cell, but was turned down. She took the rejection philosophically. ‘It’s 27 years later. Let’s go on,’ Mrs. McCain said.”

The McCain campaign again declined to comment on the discrepancy.

On background, a source close to Mrs. McCain confirmed that she was denied entry. But, the source added: “At some point thereafter, she toured the hospital and did coincidentally end up in the senator’s room.”

“Everybody tells white lies, but in the political world it’s a little different because it raises the question that if people lie about little things, are they also going to lie about big stuff that really matters?” says Mr. West.

Misremembering and stretching the truth is without doubt a bipartisan phenomenon. Twenty years ago, Sen. Joe Biden (D) of Delaware’s presidential campaign faltered when it was learned that he had lifted passages from a speech by then-British Labor Party leader Neil Kinnock and that he’d also said he’d done better in law school than he actually had.

Earlier this year, Barack Obama’s campaign admitted that he overstated his father’s connection to the Kennedy family.

In speeches, Obama had said the Kennedy family provided funding for the 1959 airlift that brought his father from Kenya to the United States for an education. But according to research done by The Washington Post, the Kennedy clan didn’t contribute to the airlift efforts until 1960, a year after his father was already studying in Hawaii. When The Washington Post brought the discrepancy to the attention of the Obama campaign it readily acknowledged there was a mistake.

“You always have to look for a pattern,” says political analyst Larry Sabato, at the University of Virginia. “If it happens once, you can say it’s a memory problem, but if there’s a pattern there, there’s a problem.”

And that’s not all: The ‘only child’ myth

When Cindy McCain talks about growing up, she usually refers to herself as an “only child” — a phrase that ignores the existence of her half sisters.

“It’s terribly painful,” Kathleen Hensley Portalski said yesterday. “It is as if she is the ‘real’ daughter. I am also a real daughter.”