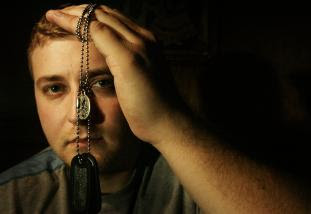 After serving in Iraq, Army veteran Chris Hauff tries to put his war experiences behind him and keep a tight focus on his job, his wife and his daughter. Photo by Eric Kayne, Houston Chronicle.
Haunted by their wartime experiences, some Iraq veterans are protesting.
By Claudia Feldman / April 19, 2008

Watch testimonials from the Winter Soldier: Iraq and Afghanistan conference at www.ivaw.org and YouTube. Hart Viges walks the streets of Austin in a tunic and carries a sign that reads, “Jesus Against War.” It’s one of many ways, he says, that he must atone for his actions as an American soldier in Iraq.

Army Sgt. Ronn Cantu says lingering memories of killing a civilian in Iraq led him to start a chapter of Iraq Veterans Against the War at his home — Fort Hood.

And in Houston, Chris Hauff, an Iraq War vet who returned from combat two years ago, wrestles with the feeling that his best friend died in a misguided war.

“The idea that American soldiers are there to spread democracy and liberate the people is all smoke and mirrors,” Hauff says.

After five years and more than 4,000 American deaths, hundreds of anti-war Iraq veterans and even some active-duty soldiers are speaking out in protest. Though they make up a relatively small percentage of all the soldiers who have served, certainly they speak from experience. They’ve had their boots on the ground.

Nationally, more than 1,000 have joined Iraq Veterans Against the War, which is calling for an immediate troop pullout. At a recent IVAW conference in suburban Washington, D.C., 60 vets addressed about 400 peers. Collectively, they described American soldiers unraveling under pressure — devolving from fighting for freedom and defending innocents to saving their own lives, protecting their friends and getting revenge.

Viges, tall and reed-slim, spoke as if his entry to heaven were on the line.

“I joined the Army right after September 11th,” he began. He ended with, “I don’t know how many innocents I’ve helped kill. …

“I have blood on my hands.”

His story, common among the speakers, began with good intentions and patriotic zeal. Then he realized he couldn’t tell friend from enemy, and as he dodged mortar fire and roadside bombs, he feared each new day was going to be his last.

In that atmosphere, Viges and other soldiers assigned to the 82nd Airborne Division aimed countless mortar rounds at the town of As Samawah, southeast of Baghdad. They were trying to root out insurgents, but to this day, Viges doesn’t know whom or what they hit.

The panelists’ speeches were vetted ahead of time by two groups of veterans who scoured news accounts, researched documents, videos and photographs where available, and interviewed others who were present at the time.

The testimonials were sobering. They included heart-stopping details. But the vets kept talking. Clearly, it was information they felt compelled to share.

Jason Washburn’s testimony is preserved on the Internet. A Marine veteran from Philadelphia, he explained how the rules of engagement kept changing until it seemed there were no rules at all.

“If the town or the city that we were approaching was a known threat, if the unit that went through the area before we did took a high number of casualties, we were allowed to shoot whatever we wanted.

“I remember one woman was walking by, and she was carrying a huge bag, and she looked like she was heading toward us. So we lit her up with the Mark 19, which is an automatic grenade launcher. And when the dust settled, we realized that the bag was only full of groceries. And, I mean, she had been trying to bring us food, and we blew her to pieces for it.”

Jon Michael Turner, a Marine veteran from Vermont, described 3 a.m. house raids in which “problem” Iraqi men were subjected to his “choking hand.”

It was tattooed in Arabic with an all-too-American epithet.

Turner recalled the first time he shot an Iraqi civilian. He offered no context or explanation except, “We were all congratulated after we had our first kills.”

Turner also recalled the blind rage that led him and fellow Marines to start fights, spray bullets indiscriminately and fire on mosques. Eighteen men in his unit were killed by the enemy, he said. After that much bloodshed, the surviving soldiers were damaged mentally, if not physically.

“I just want to say that I’m sorry for the hate and destruction that I’ve inflicted on innocent people,” said Turner, who began his speech by ripping off his service medals. “Until people hear about what is happening in this war, it will continue.”

Lt. Col. Mark Ballesteros, a spokesman for the Department of Defense, read from a one-paragraph response to the conference:

“(We) always regret the loss of any innocent life in Iraq or anywhere else. The U.S. military takes enormous precautions to prevent civilian deaths and injuries. By contrast the enemy in Iraq takes no such precautions and deliberately targets innocent civilians. When isolated allegations of misconduct have been reported, commanders have conducted comprehensive investigations to determine the facts and held individuals accountable when appropriate.”

The veterans who came to Maryland last month called their conference Winter Soldier: Iraq and Afghanistan. It was a sequel to a tense 1971 gathering in a Howard Johnson motel in Detroit, where more than 100 Vietnam vets braved frigid winter conditions to speak out against their war.

(Organizers of the original chose the title Winter Soldier Investigation to evoke Thomas Paine, who wrote in 1776, “These are the times that try men’s souls. The summer soldier and the sunshine patriot will, in this crisis, shrink from the service of their country; but he that stands it now, deserves the love and thanks of man and woman.”)

Proud American soldiers were reduced to acts of senseless destruction, Kerry told the senators, “not isolated incidents but crimes … .”

Many Americans — still recovering from the news of the My Lai massacre — believed Kerry. But lingering resentment from his testimony may have cost him the 2004 presidential election.

During his campaign against President Bush, Vietnam vets still furious with Kerry for somehow staining their service records and their honor struck back. They claimed he wasn’t a war hero, that he hadn’t earned his multiple medals, that in fact, he’d awarded his medals to himself.

The topic is still red-hot, even today. Pennsylvania veteran Bill Perry, who campaigned for Kerry and attended both Winter Soldier meetings, offered his perspective: “Kerry came from a well-educated, wealthy family, and he could have ducked the whole thing. I respect the person who served.”

The comment was aimed at President Bush, who did not fight in Vietnam or any war.

The latest Winter Soldier event coincided with national polls showing two-thirds of Americans disagree with the handling of the war but consider the economy and their own financial logjams more pressing than combat halfway around the world.

Viges, the veteran of the 82nd Airborne, struggled to understand that disconnect.

One of his jobs in Iraq was to stand guard with a .50-caliber machine gun while his buddies searched houses supposedly inhabited by insurgents and enemy combatants. At the conference, searches of that kind were described vividly. Sometimes soldiers kicked in the front doors. Sometimes they upended refrigerators and ripped stoves out of walls. Sometimes they turned drawers upside down and broke furniture.

One day Viges was instructed to search a suspicious house, a hut, really, but he couldn’t find pictures of Saddam Hussein, piles of money, AK-47s or roadside bombs.

“The only thing I found was a little .22 pistol,” Viges said, ” … but we ended up taking the two young men, regardless.”

An older woman, probably the mother of the young men, watched and wailed nearby.

“She was crying in my face, trying to kiss my feet,” Viges said. “And, you know, I can’t speak Arabic, but I can speak human. She was saying, ‘Please, why are you taking my sons? They have done nothing wrong.’ “

The testimonials went on for 3 1/2 days. They were interrupted once, when a middle-age man leaped from his seat and ran toward the stage.

Others among the counter-protesters tried for a more even tone.

Chris Eaton, a former Houstonian now living in Dallas, spoke for them when he described himself as an average guy doing his best to support American troops.

Read all of it here.
Copyright 2008 Houston Chronicle

Thanks to Alyssa Burgin / The Rag Blog

This entry was posted in RagBlog and tagged Dissent, Iraq. Bookmark the permalink.