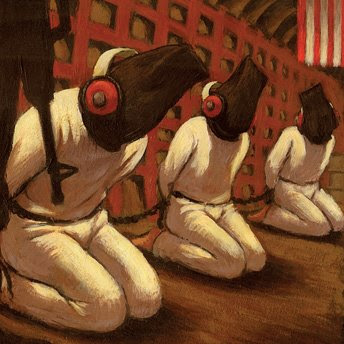 WASHINGTON — The military trainers who came to Guantánamo Bay in December 2002 based an entire interrogation class on a chart showing the effects of “coercive management techniques” for possible use on prisoners, including “sleep deprivation,” “prolonged constraint,” and “exposure.”

What the trainers did not say, and may not have known, was that their chart had been copied verbatim from a 1957 Air Force study of Chinese Communist techniques used during the Korean War to obtain confessions, many of them false, from American prisoners.

The recycled chart is the latest and most vivid evidence of the way Communist interrogation methods that the United States long described as torture became the basis for interrogations both by the military at the base at Guantánamo Bay, Cuba, and by the Central Intelligence Agency.

Some methods were used against a small number of prisoners at Guantánamo before 2005, when Congress banned the use of coercion by the military. The C.I.A. is still authorized by President Bush to use a number of secret “alternative” interrogation methods.

Several Guantánamo documents, including the chart outlining coercive methods, were made public at a Senate Armed Services Committee hearing June 17 that examined how such tactics came to be employed.

But committee investigators were not aware of the chart’s source in the half-century-old journal article, a connection pointed out to The New York Times by an independent expert on interrogation who spoke on condition of anonymity.

The 1957 article from which the chart was copied was entitled “Communist Attempts to Elicit False Confessions From Air Force Prisoners of War” and written by Alfred D. Biderman, a sociologist then working for the Air Force, who died in 2003. Mr. Biderman had interviewed American prisoners returning from North Korea, some of whom had been filmed by their Chinese interrogators confessing to germ warfare and other atrocities.

Those orchestrated confessions led to allegations that the American prisoners had been “brainwashed,” and provoked the military to revamp its training to give some military personnel a taste of the enemies’ harsh methods to inoculate them against quick capitulation if captured.

In 2002, the training program, known as SERE, for Survival, Evasion, Resistance, Escape, became a source of interrogation methods both for the C.I.A. and the military. In what critics describe as a remarkable case of historical amnesia, officials who drew on the SERE program appear to have been unaware that it had been created as a result of concern about false confessions by American prisoners.

Senator Carl Levin, Democrat of Michigan and chairman of the Senate Armed Services Committee, said after reviewing the 1957 article that “every American would be shocked” by the origin of the training document.

“What makes this document doubly stunning is that these were techniques to get false confessions,” Mr. Levin said. “People say we need intelligence, and we do. But we don’t need false intelligence.”

A Defense Department spokesman, Lt. Col Patrick Ryder, said he could not comment on the Guantánamo training chart. “I can’t speculate on previous decisions that may have been made prior to current D.O.D. policy on interrogations,” Colonel Ryder said. “I can tell you that current D.O.D. policy is clear — we treat all detainees humanely.”

Mr. Biderman’s 1957 article described “one form of torture” used by the Chinese as forcing American prisoners to stand “for exceedingly long periods,” sometimes in conditions of “extreme cold.” Such passive methods, he wrote, were more common than outright physical violence. Prolonged standing and exposure to cold have both been used by American military and C.I.A. interrogators against terrorist suspects.

The chart also listed other techniques used by the Chinese, including “Semi-Starvation,” “Exploitation of Wounds,” and “Filthy, Infested Surroundings,” and with their effects: “Makes Victim Dependent on Interrogator,” “Weakens Mental and Physical Ability to Resist,” and “Reduces Prisoner to ‘Animal Level’ Concerns.”

The only change made in the chart presented at Guantánamo was to drop its original title: “Communist Coercive Methods for Eliciting Individual Compliance.”

The documents released last month include an e-mail message from two SERE trainers reporting on a trip to Guantánamo from Dec. 29, 2002, to Jan. 4, 2003. Their purpose, the message said, was to present to interrogators “the theory and application of the physical pressures utilized during our training.”

The sessions included “an in-depth class on Biderman’s Principles,” the message said, referring to the chart from Mr. Biderman’s 1957 article. Versions of the same chart, often identified as “Biderman’s Chart of Coercion,” have circulated on anti-cult sites on the Web, where the methods are used to describe how cults control their members.

Dr. Robert Jay Lifton, a psychiatrist who also studied the returning prisoners of war and wrote an accompanying article in the same 1957 issue of The Bulletin of the New York Academy of Medicine, said in an interview that he was disturbed to learn that the Chinese methods had been recycled and taught at Guantánamo.

“It saddens me,” said Dr. Lifton, who wrote a 1961 book on what the Chinese called “thought reform” and became known in popular American parlance as brainwashing. He called the use of the Chinese techniques by American interrogators at Guantánamo a “180-degree turn.”

The harshest known interrogation at Guantánamo was that of Mohammed al-Qahtani, a member of Al Qaeda suspected of being the intended 20th hijacker in the Sept. 11 attacks. Mr. Qahtani’s interrogation involved sleep deprivation, stress positions, exposure to cold and other methods also used by the Chinese.

Terror charges against Mr. Qahtani were dropped unexpectedly in May. Officials said the charges could be reinstated later and declined to say whether the decision was influenced by concern about Mr. Qahtani’s treatment.

Mr. Bush has defended the use the interrogation methods, saying they helped provide critical intelligence and prevented new terrorist attacks. But the issue continues to complicate the long-delayed prosecutions now proceeding at Guantánamo.

Abd al-Rahim al-Nashiri, a Qaeda member accused of playing a major role in the bombing of the American destroyer Cole in Yemen in 2000, was charged with murder and other crimes on Monday. In previous hearings, Mr. Nashiri, who was subjected to waterboarding, has said he confessed to participating in the bombing falsely only because he was tortured.