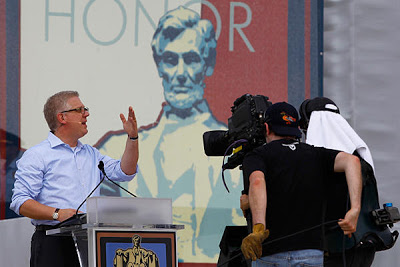 Beck…ignores the reality that our essential legal structures are Greco-Roman and Hodenosaunee (Iroquois) in origin, NOT Judaeo-Christian. Five of the first six presidents of the United States were Unitarians and/or Deists, NOT Christians…

Now that the dust has settled from Glenn Beck’s weekend revival at the Lincoln Memorial, two messages need to be delivered loud and clear.

First: the United States of America has NEVER been a Christian nation, but there are those who would make it so, past and future.

And second: do not discount Glenn Beck becoming president of the United States.

I say these things after having sat through nearly all of the 17-part video rendering of Beck’s rally this past weekend, and having read as many critiques of it — left and right — as I could find.

This rally was not about intellectual content, and it’s a mistake to analyze it that way.

Its organizers kept the verbal content extremely simple: honor the military, “restore America,” have faith in your churches, follow their lead, and donate generously.

Much of the real meaning was in who was missing.

The only major media stars were Glenn Beck and Sarah Palin. Limbaugh, O’Reilly, Hannity, Levin, Dr. Laura, Ann Coulter — no one else from the firmament of the Right got the mike or — unless I missed them — appeared on camera.

While his rhetoric was duly humble, the sum of Beck’s parts was about his personal Divine Inspiration. The rally was a “miracle,” he said. God told him to do it, and its stunning, unlikely, impossible, amazing, fantastic, Godly, lucrative success was all due to Him, operating through His only visible Messenger, Glenn Beck.

As of this rally, there is no other putative favorite for the Republican nomination for president. Beck is the only one with a very large, dedicated grassroots constituency.

His modus this weekend was keeping it simple. But there were some twists. He is a Mormon. He repeatedly referred to the Jewish exodus from slavery in Egypt (he timed it wrongly by about two millennia) and had a rabbi conspicuously center stage. He honored Native Americans, the other “lost tribe.” Until the very end, when he did mention “mosques” as a place of worship, there was virtually no mention of Muslims, and none prominently on display.

The vast bulk of the show had to do with honoring the military, the Christian faith, and with endless sermons by Beck himself. Except for Palin, no one else spoke anywhere near as long, and even her appearance was fleeting by comparison.

There was also a strenuous avoidance of explicit partisan politics. Obama’s name was barely mentioned. The most prominent reference to abortion came from Dr. Martin Luther King’s niece. The natural environment was a total no-show. Ditto partisan bickering over deficits, social security, etc. (Unspoken, too, was Beck’s endorsement of the legalization of marijuana).

One might assume Glenn figured we all know where he stands due to his radio and TV shows. But if that was meant to be the message, it was implied, not stated.

Dr. King’s fierce opposition to the war in Vietnam was never mentioned. But he was repeatedly placed in the pantheon of American greatness alongside Washington, Jefferson and Lincoln. The documentary clips — which Beck narrated — gave the impression of uncompromised support for the civil rights movement.

As usual, the proportion of people of color on stage vastly outstripped the diversity of the actual audience. Except for a Beatles t-shirt that somehow appeared on a participant in the crowd, the 1960s seemed to have never happened, except in the agonies of our troops in Vietnam.

No… on a bright, sunny day in front of the Lincoln memorial, surrounded by monuments to our great presidents and wars, this had all the trappings of well-scrubbed audition for a presidential candidacy.

As expected, the show did feature the usual array of patented historical fabrications. Topping the list was a “Black Robed” battalion of armed priests who allegedly terrified the British during the American Revolution. To end the rally Beck dragged up more than 200 preachers to replicate the symbol.

This is pure — and dangerous — invention. If you can find solid reference to this alleged priestly horde anywhere in our history, please send the citations.

Like most of the right, Beck avoids our nation’s deeply secular roots. He repeatedly cites the Constitution and Declaration, but NEVER the Bill of Rights.

Beck also ignores the reality that our essential legal structures are Greco-Roman and Hodenosaunee (Iroquois) in origin, NOT Judaeo-Christian.

Five of the first six presidents of the United States were Unitarians and/or Deists, NOT Christians. So were three of the five men charged with writing the Declaration of Independence. Tom Paine, who wrote the book — Common Sense — that inspired the Revolution, was deeply critical of the Christian faith, to which he most decidedly did not ascribe.

Nor did Ben Franklin, the new nation’s truest intellectual godfather, who is almost always absent from the neo-con iconography. It was the free-living Franklin who drew the inspiration for the federal union from the Iroquois Confederacy, still history’s longest-lived democracy.

Thanks in large part to Franklin, the word “Christian” (like the word “corporation”) was omitted from the Constitution by intelligent design.

None of which mattered at this excruciatingly sanitized gathering. We will see, in the coming months, what kind of legs it gave Mr. Beck, and where he wants to go with them.

He’s never run for or held public office. To many he seems a marginal fool, a bore and a rube, a Crusader Babbitt for a traumatized Main Street… just like, say, Ronald Reagan or George W. Bush.

Now he’s stepped out of the studio and into the real world of grassroots constituency-building. He has inspired a large and dedicated core and transcended his merely electronic base. His people have a fire in the belly, with a serious flow of cash nobody else on the right or left can currently match.

Maybe, for the true inner Beck, it’s just about the money and the glory. Until he hears those voices again.

For in a broke new world, where anything can happen, Glenn and his God just might smite us all.

[Harvey Wasserman has been involved in the struggle for peace, justice, and a green earth since the late 1960’s. Harvey Wasserman’s History of the United States is at www.harveywasserman.com, along with “Thomas Paine’s” Passions of the Potsmoking Patriots.]