Posted on September 7, 2010 by Thorne Dreyer 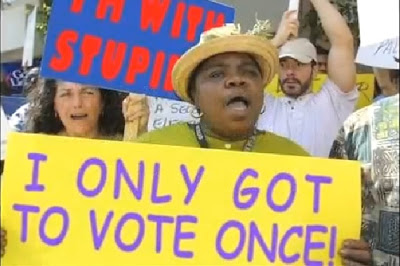 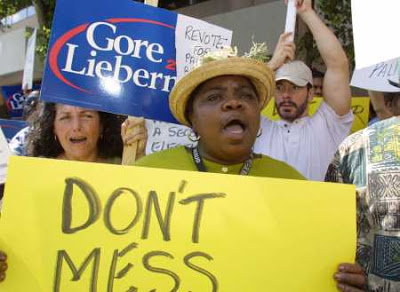 The top photo is the captured still from a video (see it here) put out by True the Vote that alleges “Democrats” manipulate elections. Digital Dupes then reported that it appeared that some of True the Vote’s evidence might be manipulated, pointing out, as an example, that the type on the poster in the top photo was “perfectly flat,” and that “the font is clearly Comic Sans with a slight compression along the x-axis, not hand lettered which would make this an unlikely meticulous stencil or expensive printed sign.” Then the un-doctored original (lower photo) was found.

Contempt for democracy in Houston:
Attacks on voting rights

In Harris County (Houston), Texas, a tea party group called King Street Patriots is engaged in a systematic attack on voting rights. They are working dirty hand in dirty hand with a Republican County voter registrar to suppress the votes of those they believe unworthy, that is, those who might disagree with their own political choices.

Of course, they say they just want fair and open elections. “It’s really about truth,” says King Street founder Catherine Engelbrecht in an eight-minute video that includes doctored images and phony charges of “fraud” against… well, you only see pictures of African-Americans when fraud is discussed, so the implication is clear.

Maybe it was just coincidence that the warehouse containing all — all — of Houston’s voting machines burned down mysteriously just as King Street Patriots and their ally, Tax Assessor-Collector Leo Vasquez, went public with their fraud allegations. Whatever the case, the voter intimidation and suppression campaign is clearly part of a well-funded national effort to put barriers in the way of voters suspected of disagreeing with the perpetrators’ right-wing agenda.

The contempt for democracy demonstrated by partisans who think nothing of violating the fellow citizens’ right to vote is staggering. Not only are election outcomes potentially altered, the health of civil society itself is altered.

Journalists tend to shrug it off as a kind of prankish misdemeanor. But mail pieces like that one pictured above (read about it at Lone Star Project) are clearly intended to scare would-be voters into thinking any misstep will land them in jail. Mailers like the one below are now a common part of every election. 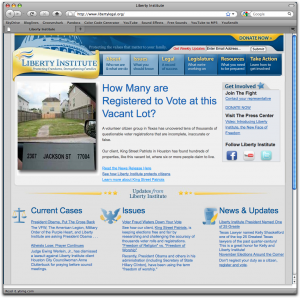 Groups like King Street Patriots hide behind rhetoric that they are the guardians of fair, open, and honest elections. If that is true, why do they lie? Why do they invent stories of fraud where none exist? Why do they doctor images in their video? If truth is what they want, why do they poison it?

Their lies betray their real goal: to limit the voting rights of their political opponents. Let me detail one of their lies. They claim repeatedly that in Houston, six people are registered to a vacant lot. The claim is the symbolic center of their phony accusations of voter fraud.

It didn’t take very many minutes of research to discover how ridiculous this charge was. Incidentally, the Liberty Institute has taken the image down from its website. LI is run by King Street Patriots lawyer, Kelly Shackleford, the guy who tried to suppress the Alaska Legislature’s Sarah Palin report. Anyway, it turns out that there was a rent house on that vacant lot until 2010. A demolition permit was issued in September 2009. Tax records indicate the house stood until 2010. The six registered voters mentioned in the attack were renters going back 10 years.

If any doubt remains, here’s a Google Earth photo of the house that once stood on King Streets’ allegedly vacant lot. 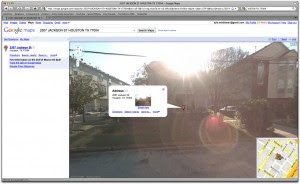 King Street Patriots doesn’t care, of course, because the truth of an allegation is irrelevant. Like all voter suppression and intimidation campaigns (Greg Mitchell’s account of the the 1934 California gubernatorial race tells a great story about how unfounded accusations of fraud can be used to suppress votes) racist allegations of widespread fraud are used to stir anger among (usually white) conservative voters and intimidate minority voters.

Here’s another example. In their video, King Street Patriots uses a doctored image of an African-American rally-goer holding a sign that reads, “I Only Got to Vote Once.” [See above.] The sign is lettered in the Comic Sans font and was clearly photoshopped. Once again we have to ask, if truth and fairness are what they want, why phony-up images? This one actually makes me chuckle for its sheer absurdity. Under what possible circumstances would anyone publicly complain that they only got to vote once?

By the way, there is a national effort to find the young female victim of this particular little fraud. Go to DigitalDupes.org to participate.

The Right wants its suckers to believe that scary people are out there undoing what would otherwise be the natural result of “fair” elections: the absolute hold on power by, well, them.

King Street Patriots appears to be connected to the national right-wing network funded by the notorious Koch brothers. Jane Mayer’s recent piece on them in the New Yorker should be mandatory reading. I think the voter intimidation and suppression campaigns in 2010 will be better funded and more organized than ever before. And I think the best way to discredit them is to expose their lies.

An argument over a lot at 2307 Jackson Street in Houston, Texas, may seem trivial. But it’s not. Caught in a lie, King Street Patriots betrays its true intentions, intentions shared by a national network of anti-democracy forces that will disrupt the 2010 elections any and every way they can.