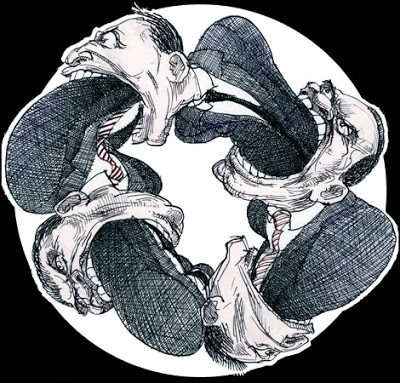 Since World War II, America’s elite policy makers have arranged and rearranged our political and economic relationships around an empirically false — radically false — understanding of human being and behavior.

Paradoxically, the false portrait of humankind feeds both an unwholesome worship of dog-eat-dog individualism and a sense of powerlessness in the face of godlike market forces that must be obeyed no matter the cost in lives, global environmental catastrophe, or gross economic injustice.

It’s just one of many ironies that this authoritarian view was swallowed whole hog by so-called libertarians. (It should be noted that Robert Nozick, author of the seminal libertarian book, Anarchy, State, and Utopia, later spit out the worm he’d swallowed and repudiated his earlier work.)

The ugly, empirically false portrait is this: a human is a cold and isolated individual who uses unemotional reason to reach predetermined ends. This is the widely discredited but still popular “rational actor” model. And there’s another color in the picture, which some are now calling the “rat choice” model. This tells us those predetermined ends are always selfish or self-interested.

Cognitive scientists like George Lakoff have been urging us to grasp the new 21st Century understanding of human being and thinking. Dozens of others have made similar points. We can’t advance a progressive social vision using false assumptions disguised as unbiased scholarship, assumptions intended to forever preclude a fair, progressive, democratic society.

It should come as no surprise that corporations and wealthy conservative ideologues funded the multi-decade effort to convince Americans our nature is other than it is. First came the Rand Corporation. It was there that economist Kenneth Arrow articulated the so-called “rational choice” theory. Here’s how historian Alex Abella summed it up in Soldiers of Reason:

Our most important task involves replacing the deceitful view of humankind with the new — and true — picture of cooperative, empathic, and complex human being (we can, obviously, be selfish, cruel and violent — but that’s not all we are).