Glenn W. Smith : Gabrielle Giffords and The Blood of Eden 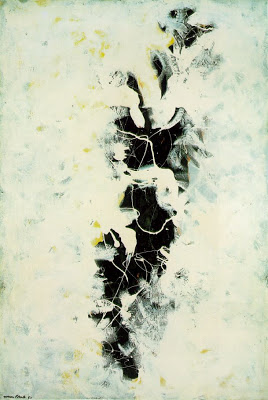 Jackson Pollock’s The Deep. Oil and enamel on Canvas (1953).
The Blood of Eden:
Our escalating political violence

So many American bodies are sprayed with blood, their own, their lover’s, their mother’s and father’s, their brother’s and sister’s. Oh we are so certain of our innocence, but we are a nation tattooed in crimson, eyes to belly, with Jackson Pollock’s “The Deep.”

We called it a New World then carved a Trail of Tears for those who knew it to be ancient: the Choctaw, the Cherokee, the Seminole. And now we walk that Trail ourselves, lost and tormented, crying for Gabrielle Giffords, U.S. Judge John Roll, and the other victims of the Tucson shootings.

The “Rawhide Orator,” Choctaw Chief George Washington Harkins, in 1831 wrote to the American people before leaving for the Trail of Tears:

I could cheerfully hope, that those of another age and generation may not feel the effects of those oppressive measures that have been so illiberally dealt out to us; and that peace and happiness may be their reward.

A cheerful hope, and one unfulfilled, as the ghosts of dead immigrants whisper to us from the Arizona desert.

Within a few short hours of Saturday’s shootings, pundits and politicians were decrying the violent political rhetoric and symbolism that feeds the fires of hell. The conversations could have — and should have — taken place long before Saturday. They all knew what was coming.

Just Friday I did an interview with Thorne Dreyer of Texas’ The Rag Blog and Austin’s KOOP-FM in which I warned again of our escalating political violence and compared our era to the years preceding the Civil War. Gods, I should have prayed hard to be wrong.

Gabrielle, you are named for the angel who foretold the coming of eternal peace. In your remarkable March 2010 MSNBC interview following the vandalism of your office, you saw a different future:

They really do need to realize that their rhetoric and firing people up and even things for example where on Sarah Palin’s targeted list… the way she has it depicted, it has the crosshairs of a gun sight over our district. When people do that they have to realize there are consequences to that action.

What haunts us is not a momentary collapse of good manners. We have spoken often here about the loss of sociality in the public sphere. It is a fact that many in power have very consciously promoted hatred and violence. I suppose they meant it poetically. They will all plead innocence now and wear modest garlands of grace about them. It’s a thin disguise.

We are a polarized people, and violence races like a water snake through the river of our history. We are attracted to those who kill for their prejudices or beliefs. But as John Wayne’s Ethan Edwards discovered in The Searchers, such is the path to the death of the soul.

And it does not need to be this way. Our greatness lies less in violent victories than in moments of democratic transcendence, from the Bill of Rights to women’s suffrage. We are linked to one another, like it or not. When one falls to the bloody ground, so will the other.

This is not a game. It is a great struggle for human freedom and peace, and we can no longer tolerate the cowardly murderers who stir the beasts in us for a few gold coins. Pilate’s hands, they may be reminded, have not yet been washed.

At my request you take me in
In that tenderness I am floating away
No certainty, nothing to rely on
Holding still for a moment
What a moment this is
Oh for a moment of forgetting
A moment of bliss
Oh…

As it happens, as the shots were fired in Tuscon we were safe and unaware in our home, holding still in a moment of forgetting and bliss, as the song says. And I’m reminded that we must make of love not a refuge from the world but the world itself, and that will be the end of forgetting.

One another to hold — that is all we are given in this life, and I mean that with a fierceness that ought to set the violent to wondering. And we’ll hold them tenderly, too, because if we’re to love we must acknowledge and extinguish the fear that can twist the hearts of those who very briefly share this place with us.

[Austin’s Glenn W. Smith, according to Daily Kos founder Markos Moulitsas, is a “legendary political consultant and all-around good guy.” His excellent blog on politics and culture is DogCanyon, This article was also posted at Firedoglake and DogCanyon.

1 Response to Glenn W. Smith : Gabrielle Giffords and The Blood of Eden