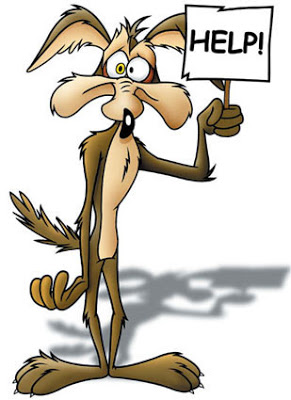 That goes for all of us! Image of Wile E. Coyote from Three Fingers of Politics.

Is Rick Perry a person?

Glenn W. Smith will discuss “Rick Perry and the ‘Texas Miracle'” with Thorne Dreyer on Rag Radio, Friday, Aug. 26, from 2-3 p.m. (CST), on KOOP 91.7-FM in Austin, and streamed live here. Find podcasts of all Rag Radio shows at the Internet Archive.

Rick Perry and I go back a ways. As a reporter in the 1980s, I covered his undistinguished years in the Texas House. As a staffer to a Democratic lieutenant governor, I sat in meetings with him and watched him getting teased by his colleagues for his vanity. He clearly loves him some Rick Perry. He’s reported to shave his legs. Something about jogging speed. It’s earned him the name, “Nair Do Well,” but maybe shaved legs are de rigueur among the coyote-whacking-while-jogging set.

Here’s an odd fact: Rick Perry loves to criticize the federal stimulus package. But without the billions in federal money Texas received in 2009, Perry would have had to raise taxes to cover Texas’ budget deficit. Had he raised taxes, he would now be dead in the water in the GOP primary. President Obama, in a sense, paid for the campaign viability of his most likely 2012 opponent.

Still, if Rick Perry can be president, I can play center field for the New York Yankees. But I try to reassure myself. The universe simply can’t be this upside down. Nonetheless, Perry is likely to win the Republican nomination for president.

The Perry candidacy would pit a secessionist Southern governor against the nation’s first African-American president. Just pause and think about that a moment.

Perry tries to distance himself from his public flirtations with secession. A recently uncovered video, however, shows he was thinking about secession even before he mentioned it at a Tea Party rally in April 2009. Perry is using racist code when he speaks of secession. Anybody who thinks it is about the size of government or economic populism is kidding themselves. With his secession remarks, Perry is calling the Klan.

When Perry announced in South Carolina, he criticized governments “that elevated rulers at the expense of the people.” Odd, because after knowing Perry since the 1980s, I’m pretty sure that elevating rulers above the people is his first principle.

Perry’s religious cult fest in Houston a week ago was neatly summed up by writer Sarah Posner:

One preacher, Mike Bickle, was explicit, recommending not liberty but “ a life of obedience.”

It remains a mystery that so many libertarian-leaning Americans overlook the authoritarian ambitions of America’s Right. Perry talks about obedience to Jesus, but he really means obedience to Rupert Moloch, I mean Murdoch, and other transcendent, unreachable corporate gods.

Perry’s allegiance is not to other people, but to global Corporate Olympians. Just like Zeus, the new Corporate Olympians disguise themselves as persons so they can screw us. The disguise is called “corporate personhood,” though it should be called “corporate superpersonhood.” (The organization, Move to Amend, campaigning to end corporate personhood and “legalize democracy,” is worth your support).

The headline above is meant in jest, of course. Rick Perry is an all-too-human person, a human who has turned Texas into a third-world region that is the nation’s most polluted environment populated by the least healthy, most poorly educated, and most poorly paid humans in the nation. Maybe Perry’s running for president to improve Texas’ standing, not by pulling it up but by pulling the rest of the nation down.

Molly Ivins called him “Governor Goodhair” in reference to his Marvel comic book hairdo. He’s learned to speak in short, clipped sentence fragments like George W. Bush did, a practice that guards against “wordrobe malfunction” that would graphically display a rather flat-brained intellect.

Twice now Perry has won elections by running ads that call his opponents cop-killers. I’m not making that up. In 2002, Perry accused Democrat Tony Sanchez of complicity in the murder of a DEA agent. In 2010, Perry accused Democrat Bill White of complicity in the murder of a Houston policeman. We don’t know yet what cops were killed by Mitt Romney or Michelle Bachmann, but Perry’s team will find them. It’s only a matter of time.

Perry’s campaign themes — no regulation or oversight over corporations, low taxes on corporations, no legal accountability for corporations — are the themes of a dangerous corporate authoritarianism. They are meant to complete the transformation of democracy into Democracy, Inc., to use Sheldon Wolin’s fine term. Perry’s is a frontal assault on individual liberty.

Perry is all about obedience to authority, his authority and the authority of corporations to run our lives without interference or oversight. Libertarians — and the rest of America — had better wake up to the place Perry’s ruthlessness and discipline will take us.

Here’s a video some Texans put together to give the nation a look at Perry. I hope they look hard.

5 Responses to Glenn W. Smith : Is Rick Perry a Person?