Glimpses of Our (North American) Future? 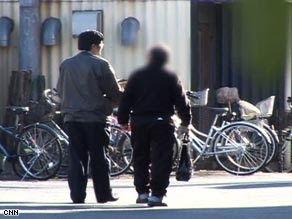 An elderly man walks away from a Tokyo grocery store after being observed stealing medicine for an upset stomach. Photo: CNN.
Report: More elderly Japanese turn to petty crime
From Kyung Lah / December 24, 2008

In 2007, 48,605 persons age 65 and older were arrested in crimes other than traffic violations, more than double the number five years earlier, according to a ministry report.

Thefts such as shoplifting and pick-pocketing were the main offenses, the ministry report said.

“The main reasons they shoplift are poverty and loneliness,” said Kazuo Kawakami, a former federal prosecutor. “The traditional Japanese family is gone, and now our elderly live alone.”

Morio Mochizuki, who heads SPUJ, one of Japan’s largest security firms, said the stories of shoplifting suspects at the thousands of stores his company oversees across Japan bear that out.

And the problem becomes more acute during New Year holidays, traditionally a time for family gatherings in Japan, Mochizuki said.

Economics also plays a role. Japan’s economy went into recession this year, the government says. And the country’s national pension system has been bogged down with mismanagement and corruption, leaving many pensioners with fears their lifetime savings will be lost.

“I feel sorry for them. When I talk to them, they don’t have enough money for food,” Takayuki Fujisawa, an employee of SPUJ, said of the elderly he’s caught shoplifting.

SPUJ recently allowed CNN to follow its security team at one Tokyo grocery store. In just moments, they nabbed a 69-year-old woman, allegedly trying to steal food worth about $10.

One hour later, officers stopped a second suspect, an 80-year-old man. He had enough money to pay for all of his groceries, but security officers said he tried to leave the store without paying for medicine for an upset stomach.

“I’m so sorry,” he told officers. “I live alone. My wife is in the hospital.”

Population trends offer little hope for a turnaround in the elderly crime trend. Twenty percent of Japan’s population is older than 65, the largest percentage of elderly of any country in the world. Compounding the problem, Japan has one of the world’s lowest birth rates.

On Japan’s northern island of Hokkaido, more elderly than teenagers — by a 3 to 2 ratio — were arrested in 2006, police said.
advertisement

Despite the arrest numbers, prosecutions of the elderly in a culture that holds them in high regard are rare. Stores often don’t even report the crime to police, according to security experts.

The 80-year-old man who stole the stomach medicine was eventually led to his bicycle by store security. The security officer helped the man with his groceries and bowed in respect, hoping the elderly man had learned his lesson and would return as a good customer.

This entry was posted in RagBlog and tagged Economic Crisis, Elderly, Poverty. Bookmark the permalink.