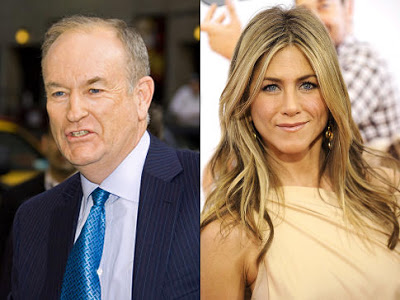 Jennifer Aniston sparked a classic Bill O’Reilly firestorm when she said a woman doesn’t need a man to have children and a perfectly fine life, thank you very much.

Defending not her personal situation but the character she plays in The Switch, her hit movie about a single woman who chose to be impregnated by a sperm donor, Aniston opined, “Women are realizing… they don’t have to settle with a man just to have a child.” O’Reilly retorted that Aniston trivialized the role of men, saying she was “throwing out a message to 12 and 13-year-olds that, ‘Hey, you don’t need a dad,’ and that’s destructive.”

It’s no accident that this pregnant pop culture moment occurred near the 90th anniversary of women’s suffrage, Women’s Equality Day, August 26. The Aniston-O’Reilly tiff highlights both the progress women have made and how far we are from reaching parity from the bedroom to the boardroom. We might be able to make babies on our own, but according to the White House Project, only 18 percent of leadership positions across all sectors are held by women.

That includes women like Mary Cheney, either clueless or co-opted or both, who even as she endorses anti-choice, anti-gay candidates, claims her own same-sex relationship and pregnancy choice are private matters.

It includes women like my Pilates instructor, who spent her life savings on achieving a high-tech pregnancy at age 42 and told me, “If men would step up to the plate, women like me wouldn’t be in this situation” of deciding solo whether or not to experience motherhood.

But the focus on these 50,000 or so exceptional conceptions overshadows the concerns and needs of the six million American women who become pregnant the old-fashioned way in any given year.

Besides, separating biology from destiny is just one of many expansions of freedoms women have aspired to as far back as 1776, when Abigail Adams urged her husband John to “remember the ladies,” threatening that the women would rebel if excluded from the Constitution (Yes, the same document Sarah Palin and the Tea Partiers want restored to its original state when enslaved African-American men were counted as 2/3 of persons and women were ignored completely).

The Founding Fathers did not heed Abigail’s plea, the women did not rebel, and as a consequence it took until 1920 for women to achieve ratification of the 19th amendment to the Constitution guaranteeing them the right to vote.

And just as those against women’s suffrage alleged it would trigger the demise of the patriarchal family, what sets off the O’Reilly Factors of the world isn’t so much concern that high-tech turkey-basters will replace the penises they hold dear. It’s terror that the power over others — hegemony they’ve assumed as their gender’s birthright — diminishes in proportion to the rise in women’s power to set the course of their own lives.

Nothing could be further from the truth, of course. Power isn’t a finite pie where a slice for you makes less for me. It’s an abundant resource. The more it is shared, the more the pie grows, and the more everyone thrives.

But if men have not yet figured this out, neither have women decided it’s time to use their power to make the rest of the changes needed to reach full equality.

A recent Harris Poll found three out of five Americans say the U.S. has a long way to go to reach gender equality. Not surprisingly, there’s a gender difference: half of men feel inequality remains whereas 74 percent of women agree. But the startling finding is that both men and women across the age spectrum downplay the importance of rectifying gender inequality, saying there are more pressing issues to fix.

That kind of self-abnegation to which women are still acculturated is why AOL’s electronic greeting card selections celebrated August 26 as National Toilet Paper Day as recently as 2007, yet the company had no card for Women’s Equality Day. Popular culture will continue to imitate what we talk about and what we pay attention to in our daily lives.

And while it’s relatively easy for a celebrity like Jennifer Aniston to get attention for any subject, it’s much harder for the rest of us to shine the public spotlight on other important issues impinging upon equality.

Today’s challenges to reaching a fair gender power balance are rooted not so much in legal barriers as in eliminating lingering constrictive cultural narratives, such as assuming mothers are less competent workers, thus paying them less than men or than women without children.

Women can’t wait for a Jennifer Aniston to lead the charge for change, and we don’t need to.

It took just one woman, unknown to the paparazzi, calling AOL’s oversight to the attention of 10 of her friends, asking each to forward the message to 10 more, to start a viral protest to AOL. An avalanche of complaints ensued, and Women’s Equality Day cards magically appeared.

Assuring that attention is paid by media, decision makers, and policy makers — and by women ourselves — to social and perceptual barriers standing in the way of a fair shake has become the women’s equality issue of these early decades of the 21st century. If we can accomplish that, women’s possibilities will indeed be unlimited.

O’Reilly will continue to be offended. But isn’t that just another sign of progress?

[Gloria Feldt is the author of the forthcoming No Excuses: 9 Ways Women Can Change How We Think About Power. The article was distributed by truthout.]