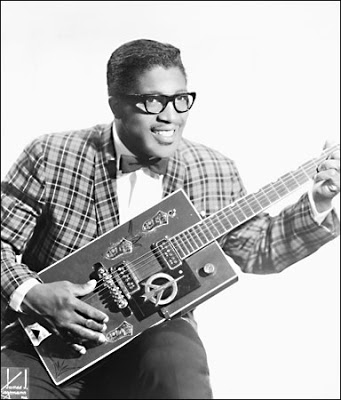 One of the fathers of rock ‘n’ roll died Monday at the age of 79. Bo Diddley was born Ellas Bates in Mississippi and grew up in Chicago, where he played guitar on street corners before being discovered by Chess Records. He leaves behind a sound that helped build a musical movement.

Diddley’s signature rhythm, among the most distinctive beats in rock ‘n’ roll, can be heard on songs like “Who Do You Love?” and “Bo Diddley.” Scholars trace the pattern to church tambourines, West African drumming, and a hand-patting rhythm called Hambone that goes back to slavery. But Diddley told the public radio show American Routes that he found it someplace else.

“I was trying to play ‘I Got Spurs That Jingle Jangle Jingle’ by Gene Autrey, and stumbled upon that beat,” Diddley said.

The beat may have come from a television cowboy, but later, Diddley described it as “basically an Indian chant.”

Regardless of the beat’s source, music historian Peter Guralnick says that Diddley made it big enough for everyone.

“That was just an invitation for people to step into,” Guralnick says. “Lots of people imitated it; lots of people carried it on.”

“It’s almost as if he foreshadowed James Brown in the sense in which rhythm predominated over melody and the usual conventions of pop songwriting,” Guralnick says. “I think it’s a tribute to Bo Diddley that it has lasted as long as it has.”

But Diddley said that while rhythm was important, the secret to good songwriting lay in something else.

He took his own advice: Many of Bo Diddley’s most famous songs were about Bo Diddley. Diddley was sent to Chicago as a child and adopted by his mother’s sister. Deeply religious, she tried to steer the young man from the devil’s music with violin lessons. He built violins and guitars at a vocational high school.

“He was gifted with his hands,” Barge says. “He loved to work on things: cars, record players, amplifiers. And he made his guitars. He crafted his whole sound.”

Some of Diddley’s guitars were custom-built to his specifications by the Gretsch company: shaped like stars or covered in fur. Barge says that long before Diddley worked audiences, he worked odd jobs and construction.

“He told me he was working one of the air hammers in the middle of the street that makes all this terrible noise,” Barge says.

Diddley’s music drew from the sounds of the Chicago streets where he first performed, and his name came from street-corner slang.

“Bo Diddley means that a guy was something extra-special or a real pistol,” Barge says.

Barge says that in addition to playing rock, blues inspired by John Lee Hooker, calypso, and Latin-tinged blues, Bo Diddley was something of a comedian. He joined up with a female sideman –- the Duchess -– and Jerone Greene on maracas for songs like the 1958 hit “Say Man,” which featured Greene and Diddley trading playful insults.

“Say Man” was Diddley’s only Top 40 pop hit. His other classic tunes never crossed over from the R&B charts, and his style of rock eventually fell out of fashion. Diddley became bitter over how others had profited from his sound. He sold the rights to his songs to pay his bills, and his living came from constant touring. Toward the end of his career, Diddley toyed with rap and even returned — more or less — to his early classical training.

“I wrote a concerto that I wrote on the guitar,” Diddley said. “It’s called ‘Bo’s Concerto.'”