Go Sign On to Something You Believe In Today 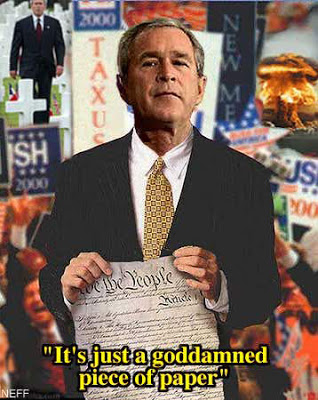 The Land of the Silent and the Home of the Fearful
By Dave Lindorff / August 28, 2008

I was a speaker last night at an anti-war event sponsored by the Unitarian Universalist Congregation of Monmouth County, Progressive Democrats of America and Democrats For America in Lincroft, NJ, near the shore. It was a great group of activist Americans who want to see this country end the Iraq War, turn away from war as a primary instrument of policy, and start dealing with the pressing human needs of the country and the world.

Yet even in this group of committed people, one woman stood up during the question-and-answer session and said, “I want to get involved in writing emails to members of Congress urging them to cut off funding for the war and other things, but if I do that won’t I end up getting put on a ‘watch list’ or something?”

I told her the short answer was yes, she probably would. In George Bush’s and Dick Cheney’s America, no one is safe from such spying, and even from harassment, as witness Tom Feeley, the man behind the website Information Clearing House, who had armed men invade his house at night and threaten his wife complaining about his First Amendment-protected effort to publicize important stories on the Internet.

But I also told her that it didn’t matter. She should defend her freedom of speech and her right to petition for redress of grievances, just as she was defending her freedom of assembly by attending last night’s event.

The only demonstrably true statement George Bush has made in his sorry eight years in office is that the Constitution is “just a goddamned piece of paper.” While it wasn’t the point he was making, when he reportedly shouted this at a couple of Republican members of Congress who were questioning the constitutionality of some of his actions, he was right that the nation’s founding document is only worth the parchment and ink it’s composed of, unless people use it and defend it.

There is a remarkable and palpable fear abroad in this land-not a fear of terrorism, but a fear of speaking up, a fear of being labeled as “different” or as a “troublemaker.”

People will lean over and whisper their opinions, if they think they are anti-Establishment, as though someone might be listening. People write me after some of my columns run, praising me for my “courage,” though why it should be perceived as requiring courage to merely write something in America is beyond me.

The worst thing is that every time someone says she or he is afraid, or acts afraid to speak or write what she or he is thinking, five more acquaintances become equally scared and silenced.

The corollary, though, is that each time someone forgets or ignores or rejects that fear, five people gain courage the do the same thing.

Now I’m not saying that there aren’t people monitoring, and reporting on, what we say. I know our government is busy doing that. I assume that my Internet activities are being monitored by the National Security Agency. I assume my phones are tapped. I assume there was some agent or informant among the fine people at the church last night. But these Stasi wannabes have no power if we don’t let them frighten us into silence and inaction.

What I find discouraging is the widespread acceptance, even on the left, of this effort to intimidate us, and the pervasive attitude of fear that has grown up around us. I spent a year and a half living in a truly fascistic society in China, where there are real, concrete threats to life and liberty faced by those who stand up and say what they are thinking, and yet sometimes I think that ordinary people I met in China were braver about stating their minds than many, or even most Americans are. I’m not talking here about saying things like that you think the Post Office is dysfunctional, or that you think federal bureaucrats are corrupt or that taxes are too high. I’m talking about questioning the system, or challenging the war, or protesting military spending. Chinese people would tell me all the time that the Chinese Communist Party was a corrupt gang of thugs or that you could not get justice in a Chinese court. Chinese people are closing down factories that short them on their pay. They have rallied in the thousands and burned down police stations when corrupt police have raped, killed and then covered up the death of a young girl. They have marched in massive impromptu protests at the theft of their homes through eminent domain.

If you want to see where we’re headed here in America, check out the workplace. There, we Americans have, through years of collective cowardice and unwillingness to stand together in organized labor unions, allowed our constitutional freedoms to be almost completely erased. Today, an American workplace is more akin to a police state than to a democratic society. Say what you’re thinking on the job, and you’re liable to lose it. Wear a shirt that says something the boss disagrees with, and you either remove that shirt or you are unemployed. Even that final refuge of free speech, the bumper sticker, can get workers in trouble if the wrong one shows up in the company parking lot. That loss of will and of freedom has in no small way contributed to the loss of jobs and the decline in living standards of American workers.

It’s time for all of us to put a stop to this creeping usurpation of our liberties.

The anxious woman who asked her question came up to me after the meeting and said proudly that she would not be afraid, and would start signing on to protest letter-writing and emailing campaigns.

[Dave Lindorff is a Philadelphia-based journalist and columnist. His latest book is “The Case for Impeachment” (St. Martin’s Press, 2006 and now available in paperback edition). His work is available at http://www.thiscantbehappening.net/. ]

This entry was posted in RagBlog and tagged Bush Administration, Constitution, Freedom of Speech. Bookmark the permalink.