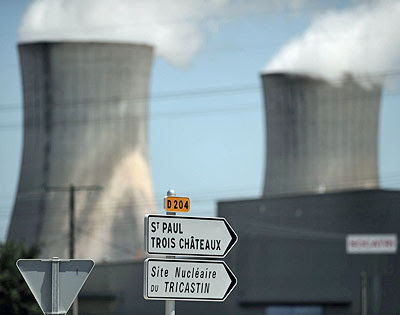 In denial verging on psychosis, Friedman says France has ‘managed to deal with all the radioactive waste issues without any problems or panic.’

France’s atomic power industry is a failed radioactive flame. Its 58 reactors are unpopular, unsafe, uneconomical, dirty, direct agents of global warming, weapons proliferators and major generators of atomic waste for which there is no management solution.

1) In denial verging on psychosis, Friedman says France has “managed to deal with all the radioactive waste issues without any problems or panic.” In fact, France’s unsolved waste problem has thousands of ultra-hot fuel rods building up at reactor sites, just like here. Its hugely expensive attempts to reprocess spent fuel cause devastating radiation releases into the English Channel and elsewhere, prompting continual demands from around Europe that they stop.

2) Friedman says “France today generates nearly 80 percent of its electricity from nuclear power plants.” But he ignores “wimpy” French public opinion that has turned decisively against building new reactors while strongly approving new wind production. The big “Non” to new nukes stems in part from massively inefficient, unreliable reactors, some of which have recently been forced shut because they are overheating the rivers meant to cool them. Is this Friedman’s “macho” solution to global warming?

3) Friedman complains that the U.S. has “not been able or willing to build one new nuclear plant since the Three Mile Island accident in 1979, even though that accident led to no deaths or injuries to plant workers or neighbors.” Friedman misses those 2400 “wimpy” central Pennsylvania families who sued for widespread death and disease they suffered after TMI’s radiation releases showered their homes and fields. The utility responsible quietly paid out more than $15 million in secret settlements.

4) Friedman complains that “we’re too afraid to store nuclear waste deep in Nevada’s Yucca Mountain — totally safe — at a time when French mayors clamor to have reactors in their towns to create jobs.” But Yucca’s ability to store anything except rusting rail lines is as yet untested. The earthquake fault that runs through it is tangible and visible. So is perched water that threatens to rain down on any radioactive waste stored there. Yucca is surrounded by dormant volcanoes — and by 80% opposition from “wimpy” Nevadans angry for a wide variety of economic, health, safety and geological reasons. Nobody in France is planning on storing high level radioactive waste in their town squares and nobody else — here or there — wants it.

5) Friedman says “the French stayed the course on clean nuclear power, despite Three Mile Island and Chernobyl, and we ran for cover.” France’s first shot at a “new generation” reactor — in Finland — is an engineering, economic and ecological catastrophe. French taxpayers are enraged about funding an Olkiluoto project that’s years behind budget and billions of Euros over budget. Anne Lauvergeon, the chief of AREVA — France’s nuclear front group — told me she blames Finland’s regulatory framework for her woes. But a parallel project at Flamanville, France, isn’t faring much better. AREVA’s fortunes have plummeted, throwing the government-controlled agency into deep financial crisis.

6) Friedman goes on to laud “Little Denmark” for imposing “a carbon tax, a roughly $5-a-gallon gasoline tax.” He fails to credit its “wimpy” but fiercely effective No Nukes movement, which has kept Denmark totally free of atomic reactors, while moving it further into wind power percentage-wise than any other nation on Earth. Angry Danish opposition has helped force neighboring Sweden to shut its Barsebaeck reactors, upwind from Copenhagen.

The true green technologies of a Solartopian Revolution are proven, ecologically sound and economically essential. They are also ready for rapid installation.

But they are decentralized and subject to community control rather than corporate domination. While Friedman and his moneyed elite continue to grasp at the failed, centralized straw of atomic energy, technology and history have passed them by.

“Real men” — and women — know we will never get to a green-powered Earth by trying to ride a dead radioactive horse — even if it’s French.

[Harvey Wasserman’s Solartopia: Our Green-Powered Earth is at solartopia.org. He is senior advisor to Greenpeace USA and senior editor of freepress.org, where this piece also appears.]