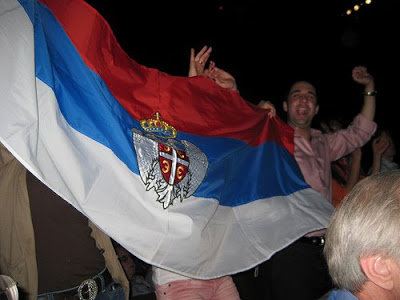 Bregović was dressed the part of rock star in a white satin suit, playing various instruments and directing the performance as it ranged from soothing to rowdy.

It was clear that the musical event featuring Goran Bregović would defy boundaries when the conservatively-attired string section was overpowered by a five-person horn section marching down the right aisle in gypsy attire. Wearing vests and cummerbunds and folkloric leather shoes that turned up at the toe, they thundered a beat that brought devoted fans to their feet. The Eastern Europeans near us –- including three generations from one family –- were suddenly waving Serbian flags, hands above their heads, clapping and dancing.

When my eclectic, live-in musical consultant got tickets to the Wedding and Funerals Orchestra at Bass Concert Hall in Austin, he knew what to expect. I was blown away. Rounding out the orchestra were two women in traditional Eastern European dress, their hats adorned with colorful cloth flowers, a gypsy drummer in black who sang with a haunting warble, and a chorus of men wearing black suits and ties. One of the male singers sported a white flat-top that would have made the KGB happy in the 60s.

A lithe and legendary rock star, Goran Bregović, guitarist and composer, assembled this crew. Born to a Croatian father and Serbian mother in Bosnia and Herzegovina, his roots are tangled in the former Yugoslavia. Bregović became famous as the lead guitarist for The White Button. He is best known in recent years for his film work. He has written the musical score for 30 movies, including Arizona Dream, Time of the Gypsies, Underground and Mustafa.

Bregović was dressed the part of rock star in a white satin suit, playing various instruments and directing the performance as it ranged from soothing to rowdy. The words were in a language, or languages, that I couldn’t understand, but the Serbians around us were happily singing along.

The Wedding and Funerals Orchestra was a stunning ensemble performance that had people dancing in the aisles. The music seemed to do more than transcend the new borders of Eastern Europe. It fused the disparate cultures into a powerful, pulsating sound.

This entry was posted in RagBlog and tagged Alice Embree, Austin, Music, Performance. Bookmark the permalink.

1 Response to Goran Bregović : The Weddings and Funerals Orchestra