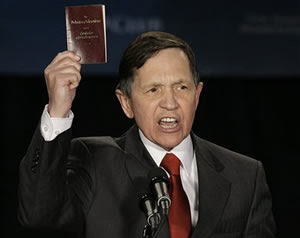 I wish to draw the attention of the blog world to Rep. Dennis Kucinich’s articles of impeachment presented to the House in order that two faithless public servants be removed from office for crimes against the American people. As I listened to Rep. Kucinich invoke the great engine of impeachment—he listed some 35 crimes by these two faithless officials—we heard, like great bells tolling, the voice of the Constitution itself speak out ringingly against those who had tried to destroy it.

Although this is the most important motion made in Congress in the 21st century, it was also the most significant plea for a restoration of the republic, which had been swept to one side by the mad antics of a president bent on great crime. And as I listened with awe to Kucinich, I realized that no newspaper in the U.S., no broadcast or cable network, would pay much notice to the fact that a highly respected member of Congress was asking for the president and vice president to be tried for crimes which were carefully listed by Kucinich in his articles requesting impeachment.

But then I have known for a long time that the media of the U.S. and too many of its elected officials give not a flying fuck for the welfare of this republic, and so I turned, as I often do, to the foreign press for a clear report of what has been going on in Congress. We all know how the self-described “war hero,” Mr. John McCain, likes to snigger at France, while the notion that he is a hero of any kind is what we should be sniggering at. It is Le Monde, a French newspaper, that told a story the next day hardly touched by The New York Times or The Washington Post or The Wall Street Journal or, in fact, any other major American media outlet.

As for TV? Well, there wasn’t much—you see, we dare not be divisive because it upsets our masters who know that this is a perfect country, and the fact that so many in it don’t like it means that they have been terribly spoiled by the greatest health service on Earth, the greatest justice system, the greatest number of occupied prisons—two and a half million Americans are prisoners—what a great tribute to our penal passions!

Naturally, I do not want to sound hard, but let me point out that even a banana Republican would be distressed to discover how much of our nation’s treasury has been siphoned off by our vice president in the interest of his Cosa Nostra company, Halliburton, the lawless gang of mercenaries set loose by his administration in the Middle East.

But there it was on the first page of Le Monde. The House of Representatives, which was intended to be the democratic chamber, at last was alert to its function, and the bravest of its members set in motion the articles of impeachment of the most dangerous president in our history. Rep Kucinich listed some 30-odd articles describing impeachable offenses committed by the president and vice president, neither of whom had ever been the clear choice of our sleeping polity for any office.

Some months ago, Kucinich had made the case against Dick Cheney. Now he had the principal malefactor in his view under the title “Articles of Impeachment for President George W. Bush”! “Resolved, that President George W. Bush be impeached for high crimes and misdemeanors, and that the following articles of impeachment be exhibited to the United States Senate.” The purpose of the resolve is that he be duly tried by the Senate, and if found guilty, be removed from office. At this point, Rep. Kucinich presented his 35 articles detailing various high crimes and misdemeanors for which removal from office was demanded by the framers of the Constitution.

Update: On Wednesday, the House voted by 251 to 166 to send Rep. Kucinich’s articles of impeachment to a committee which probably won’t get to the matter before Bush leaves office, a strategy that is “often used to kill legislation,” as the Associated Press noted later that day.

Kucinich, O’Reilly face off over impeachment


Thanks for video to Jim Baldauf / The Rag Blog