Gov. Palin on Iraq : Hard to Tell What She Thinks 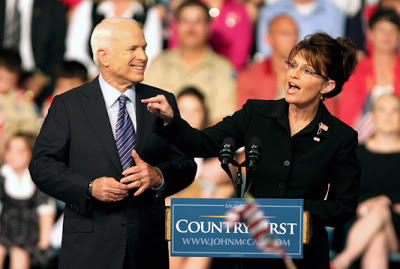 Team McCain. Photo by Mark Lyons/EPA.
‘I’ve been so focused on state government, I haven’t really focused much on the war in Iraq’
By Mark Benjamin / August 29, 2008

Presumably, John McCain would only select a candidate for vice president who shared his supposedly clear-eyed vision about Iraq, who had also called for — or at least thought it was a good idea — to push more troops into Iraq in 2007.

Well, maybe Sarah Palin thought the surge was great, or maybe she didn’t. It’s hard to tell what, if anything, Palin thinks or thought about the surge of troops in Iraq, or the decision to invade Iraq in the first place, for that matter. A clip search doesn’t show any substantive comments from Palin about Iraq during her short term as governor of Alaska, in 2007 or 2008, or at any point prior to that. That includes instances when she was specifically asked about the war.

In an interview with Alaska Business Monthly shortly after she took office in 2007, Palin was asked about the upcoming surge. She said she hadn’t thought about it. “I’ve been so focused on state government, I haven’t really focused much on the war in Iraq,” she said. “I heard on the news about the new deployments, and while I support our president, Condoleezza Rice and the administration, I want to know that we have an exit plan in place; I want assurances that we are doing all we can to keep our troops safe.”

Seven months into the surge, she still either had not formed any opinion on the surge or the war or just wasn’t sharing. “I’m not here to judge the idea of withdrawing, or the timeline,” she said in a teleconference interview with reporters during a July 2007 visit with Alaska National Guard troops stationed in Kuwait. “I’m not going to judge even the surge. I’m here to find out what Alaskans need of me as their governor.”

That’s a little weird, since Fort Richardson, near Anchorage, has dispatched countless soldiers to Iraq, including many who did not make it back. And Palin’s own son, Track, is an infantry soldier who could go there any time.