From the San Antonio Current, with thanks. 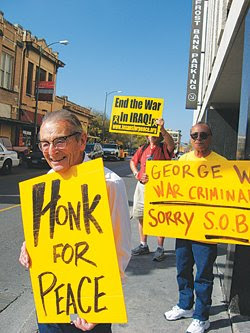 John Stanford and those calling for an end to the war in Iraq gather from 4 p.m. to 5 p.m. every Thursday at the intersection of Commerce and Flores streets in San Antonio.

John Stanford was among a core group of protestors that first gathered outside San Antonio City Hall two weeks after the attacks of 9/11 to urge a nonviolent response to the assault. The world wept in candle-lit vigils over the loss of life in New York, Washington, D.C., and a Pennsylvania field.

And the world waited, anxiously, to see how the United States would respond to the assault by a small band of motivated killers.

Today, as the U.S. occupation of Iraq enters year five, Stanford is still hopeful that human and political patterns may be adjusted to lead us onto the road of peace at last.

You’ve been meeting downtown with other folks opposed to the U.S. moving on Iraq militarily for years, is that right?

That’s right. We started meeting September 25, 2001. We were in solidarity with the victims of 9/11 — that was two weeks after 9/11 exactly — but we were also opposed to any military action being taken to bomb a country into submission because we didn’t think that would solve the problem … We were opposed to war.

Do you think we could have avoided some of the steps that have happened?

Yeah, we could have avoided that all. We could have not bombed Afghanistan, and a lot of people lost their lives. Iraq had nothing to do with 9/11. We brought al-Qaeda into Iraq.

Do you think people in San Antonio are beginning to see how the country was duped on Iraq?

I think people all over the country are. Don’t you? There’s no doubt that people see this.

What kinds of numbers come out on Thursday afternoons?

It varies. The people that have been putting out leaflets have been pulling in a few more just recently. I would say now we have about nine to 11. We used to have fewer.

We haven’t given it much publicity. We haven’t been making phone calls for people to come out on the whole. We have a good response from passersby.

It was a lot of horn-honking going on this last Thursday.

[Laughing] It usually is, yeah.

Is it frustrating to feel that support on the city streets for ending the war, but then have no commitment nationally?

It doesn’t frustrate us, because we know we have to work harder to get Congress to take a position. It’s disappointing that Congress has not responded more to what I think was a vote by the people against the war a couple of years ago. [Congress] has voted money for the war, has continued to vote money for the war. I think Congress needs to cut all funds for the war … That’s what we need to do. More and more are getting killed, injured, getting damaged for life, both physically and psychologically. We’ve killed many, many thousands over in Iraq — maybe millions — and created refugees. And certainly devastated the country.

Are you able to look back at any time in our country’s history when we didn’t opt for military solutions to difficult challenges?

They’ve been rare in recent history, certainly. I think there have been some efforts from some people. Many efforts from many people, but our government has too often gone in for military solutions.

That’s a difficult question, but I think as people are educated more, as these issues are brought out more, as people understand more about what’s going on, we can put more pressure on the government.

I think under capitalism that much can be done to change foreign policy. Increasingly, there are groups that are against the foreign policies that result in sweatshops and the oppression of other peoples and strain the natural resources of other countries. There are a number of different movements that move toward these ends.

So are you optimistic that with education and the empowerment that comes with that, that human culture will be able to grow beyond where we’ve been?

Yes, I certainly am. Yes. Otherwise I wouldn’t be out in the street demonstrating.

This entry was posted in RagBlog and tagged Peace Movement. Bookmark the permalink.