Granny D : Fear is a Humbug 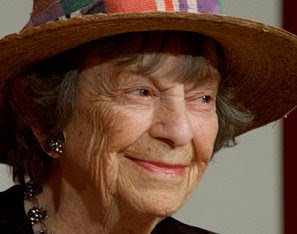 ‘This society has run its course. We the people have long been ready for fresh growth, greener growth, scaled more to the needs of human beings and their communities.’
By Doris “Granny D” Haddock

[These remarks are excerpted from a speech given by Doris “Granny D” Haddock on October 12, 2008, in Philadelphia, as it appears in the December issue of New Hampshire Magazine. Granny D, 97, gained fame by walking across the continental United States in 1999 to advocate campaign finance reform and in 2004 ran unsuccessfully as a Democrat for the US Senate from New Hampshire. The entire speech can be found at NH Mag’s website.]

It seems that the world is changing around us this autumn. I know that some of my feistier friends have been hoping for big social and political changes — for a revolution of some sort — to get us on a new path to a better future on a healthier Earth. I do not think they imagined that the revolution might take the form of strange torpedoes called credit default swap derivatives, exploding our banks and bankrupting our governments, but revolutions rarely arrive or turn out the way you expect. This society has run its course. We the people have long been ready for fresh growth, greener growth, scaled more to the needs of human beings and their communities.

I have been thinking lately of my old Texas writer friend Molly Ivins, who passed away not long ago and left us with an insufficient store of good humor to see all the amusing and satisfying turns of justice in the present economic collapse. She would remind us that Freedom’s just another word for no retirement money left to lose. Yes, the walls have crumbled, but now we are free from all that anxiety about losing all our money. There’s not much left to worry about.

Sticking together, none of us will starve. Besides, we can always grow enough zucchini for everyone, can’t we?

We need not fear Fear Itself this time around, for fear is a humbug. If we have learned anything in all the Aquarian splendor of the last few generations, it is that fear for the loss of material things is but the jitters of an addict, and the jitters go away once we relax into whatever new world we find ourselves come into.

You will hear people on television worrying about the return of the Great Depression. I have heard that several times during the last week or so.

I am old enough to have memories of that time, are any of you? Maybe we were hungry sometimes, but did we starve? No, because we had our friends and family and the earth to sustain us. The earth may have been reluctant to feed us in some of those years, but never our friends nor our families.

If you lived through that time, and if now you hear some young expert on television saying the term “Great Depression” as if it were a great monster who might return, let me ask you — you who remember the last time — there are a few of us left — let me ask you if your memories of that time are not more round and golden than sharp-edged?

My husband, Jim, made an ice rink from a little meadow, and he made a few dollars extra those winters of the Depression. I learned to put on one-woman plays, and performed in women’s clubs here and there, making the rest of what we needed. We were fountains of creativity. We were fountains of friendship to our neighbors. As a nation, we were a mighty river of mutual support.

That same Great Depression made some people in other countries ready for violence, genocide and war. But, somehow, through the exceptional miracle that is America itself, the hard times only made us more willing to help the world when our help was needed.

I am not advocating hardship, and I am not cheerleading for poverty. Indeed, prosperity is the green wreath we cherish most, though it means little without the times between.

1 Response to Granny D : Fear is a Humbug